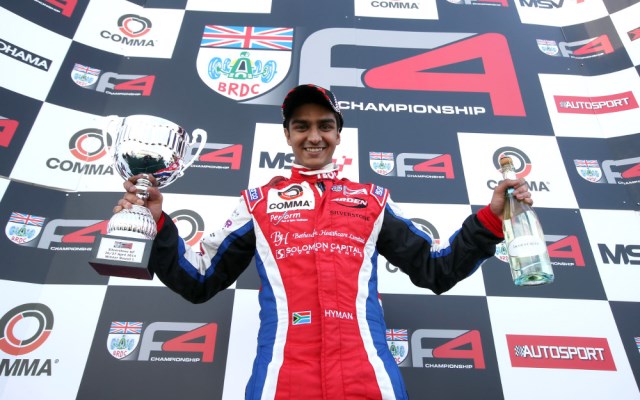 Raoul Hyman held on under a late challenge from Arjun Maini to win race one of the BRDC F4 weekend at Brands Hatch.

After denying Maini in qualifying, Hyman led from pole position and opened up a 1.4 second advantage over the Indian driver – a margin he still held with four laps to go.

Maini then closed right up to Hyman within a couple of laps, but the South African was able to hold onto the lead during the last two laps, crossing the line 0.237s ahead to repeat his Silverstone race one victory.

Will Palmer started and finished in third place, the younger brother of GP2 leader Jolyon claiming his first main series podium at the venue where he won a race in last November’s winter championship.

George Russell took fourth, meaning the double Silverstone winner holds on to the championship lead by moving onto 100 points – just one ahead of Hyman.

Sennan Fielding was fifth ahead of Struan Moore, meaning the top six was made up of three pairs of HHC and Lanan drivers.

Chris Middlehurst was best of the rest in seventh for MGR after losing a couple of spots off the grid. Diego Menchaca had been eighth until the very last corner when contact was made with Nicolas Beer, preventing either from finishing the race.