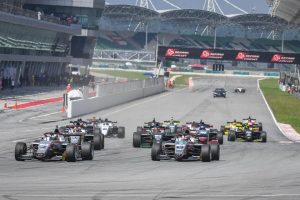 Hughes provided another masterclass after his dominant victory in the opening race of the weekend, immediately pulling away from team-mates Charles Leong and Raoul Hyman. He ended the 12 lap race over 10 seconds ahead of runner-up Hyman.

Leong and Hyman were caught up in a tight battle for second. Having started on the front row of the grid, Leong held onto second through most of the race, but Hyman managed to find a way through as the pair rounded the final corner of the penultimate lap. Leong tried to fight back at the first corner, but Hyman held the inside line to retain the position, finishing just 0.943 seconds ahead of Leong.

It was another frustrating race for Tomoki Takahashi, who was set to start fourth on the grid. The Super License driver failed to pull away from the grid, prompting quick reactions from Akash Nandy who started directly behind him. The rest of the field managed to avoid the Japanese driver and he was pushed to the pits, where he started six laps down.

Presley Martono and Daniel Cao picked up where they left off at the end of race one, battling in the lower half of the top 10. Cao was able to get the move done early in the race, but couldn?t close the gap to Owen and finished a comfortable eighth, ahead of the recovering Louis Prette.

Martono spent the second half of the race battling with Akash Gowda for the final points position. The pair swapped positions in the closing stages of the race, with Gowda managing to get ahead at the final corner before Martono made a move around the outside of turn one to reclaim the position. The pair ran side by side on approach to the chequered flag, but Martono was able to finish just 0.092s to finish 10th.