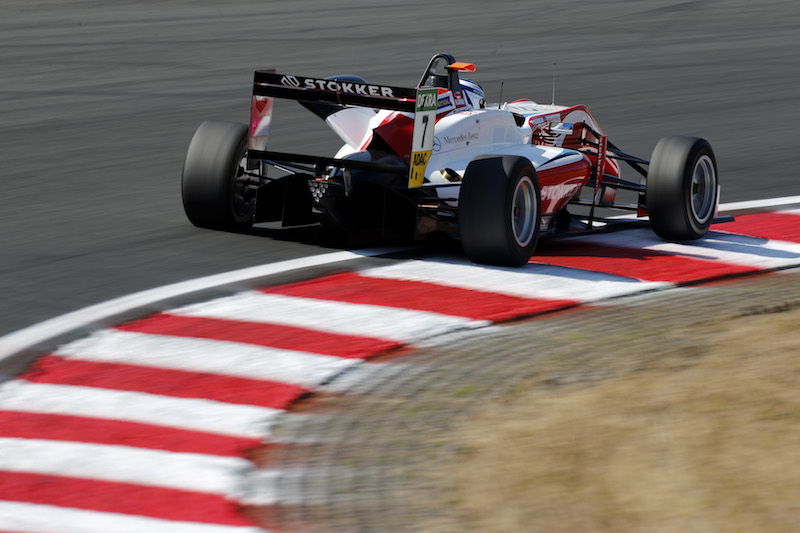 Ralf Aron won his second race of the Formula 3 European Championship season as Prema controlled the top four position during the first race at Zandvoort.

Aron started on the front row in second beside his team-mate Guan Yu Zhou, with Prema’s Mick Schumacher and championship leader Marcus Armstrong controlling the second row of the grid at the start.

After a good start Aron was able to get up the inside of Zhou heading into the first turn, with Zhou keeping close behind.

After looking the most likely to be able to make a move in the top ten during the final eight minutes of the race, championship leader Marcus Armstrong settled for fourth place with his nearest championship rival Dan Ticktum less than one second behind in fifth.

Ticktum led a Motopark trio behind, with team-mates Juri Vips and Jonathan Aberdein finishing sixth and seventh respectively four seconds down the road.

It looked like the Prema of Robert Shwartzman was going to be able to make a move on Aberdein in the second half of the race, but backed off to just less than eight-tenths of a second behind in eighth.

The top 10 was rounded of by Hitech duo Ben Hingeley and Alex Palou. For Hingeley it was his first time finishing in the points since the second round in Hungary.

Nikita Troitskiy was Carlin’s top driver in 11th place with team-mate Jehan Daruvala not far behind.

After a free practice accident that led to a difficult qualifying session for Hitech’s Enaam Ahmed, 16th place was all that the British driver could achieve.