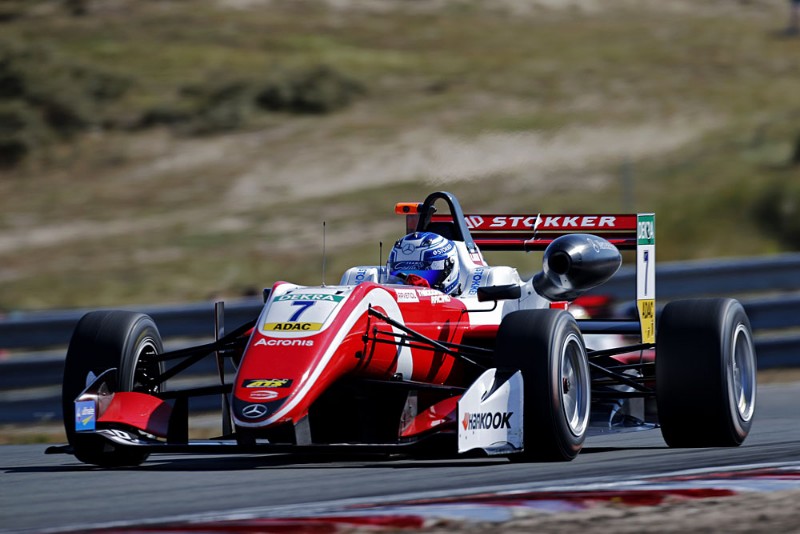 Prema’s Ralf Aron picked up his second European Formula 3 win of the weekend at Zandvoort after emerging from a first-corner clash with Dan Ticktum and Mick Schumacher.

In similar fashion to how he took the lead in the first race, Aron got a better start than pole-sitter Ticktum and claimed the inside line at the first corner.

As Aron moved left to take up the racing line, Ticktum was sandwiched between his car and that of Mick Schumacher, who also got a good start from third.

Schumacher ended up fired off track and into the gravel trap, where his race ended.

Prema still took control of all three podium positions as Marcus Armstrong and Guan Yu Zhou also got past Ticktum after the restart.

Armstrong kept within one second of Aron for the majority of the race but dropped back slightly during the final few minutes.

The victory moves Aron up into second in the standings behind Armstrong, and just ahead of Motopark’s Ticktum, who lost a handful of positions during the race to eventually finish in sixth.

After running in second for the opening 10 minutes he fell down to fourth behind Armstrong and Zhou, and then with four minutes to go quickly lost both fourth and fifth position to Hitech GP’s Alex Palou and Carlin’s Ferdinand Habsburg, fifth equalling the latter’s best result of the season.

Robert Shwartzman?was one second down the road from Ticktum in seventh for Prema, while?Ticktum’s Motopark team-mates took the final three points positions. Juri Vips finished less than four-tenths of a second ahead of Fabio Scherer in seventh, with Marino Sato further behind after losing a spot to Scherer in the middle of the race.

Along with Schumacher, Carlin’s Jehan Daruvala and Ameya Vaidyanathan and Hitech’s Enaam Ahmed and Ben Hingeley failed to finish the race in first-lap incidents.