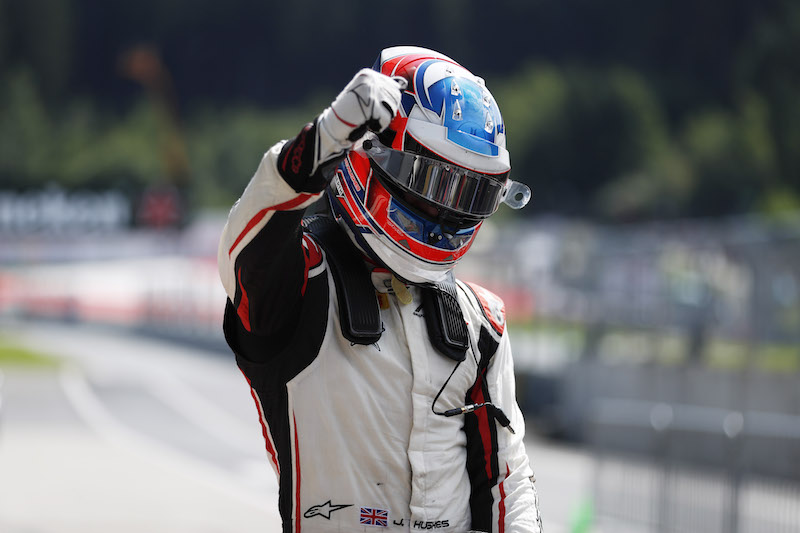 Jake Hughes defeated Pedro Piquet to win the second GP3 race at the Red Bull Ring, after the top three on the grid came together in a dramatic start.

David Beckmann started from reversed-grid pole, but the Jenzer driver didn?t get as good a getaway as Trident duo Ryan Tveter and Giuliano Alesi from second and third respectively.

Tveter pulled up the inside of Beckmann on the approach to Turn 1 and then moved to his left to open up the corner, not realising that Alesi had been trying to make it three-wide to Beckmann?s left.

The result was that all three tangled, sending them into the run-off area and retirement and allowing fourth-place starter Hughes to take the lead, albeit running side-by-side with Piquet into Turn 3 before the virtual safety car was deployed.

After the restart at the end of lap two, Hughes (racing with a new chassis after damaging his in race one) quickly built a lead of 1.4 seconds as Piquet defended from Pulcini.

Both Piquet and Pulcini then closed on Hughes to create a three-way scrap for the lead on lap eight of 18.

Piquet took the lead on the next tour, using the last of his four permitted DRS uses into Turn 4.

Once passed, Hughes was able to start using his DRS allowance to keep the pressure on Piquet, while Pulcini began to drop back having used up his.

Hughes would take the lead back from Piquet after just two laps, capitalising after the Brazilian got wide over the raised kerb exiting Turn 3.

Piquet was still only half a second behind with four laps to go, but Hughes held on to take his first win for ART Grand Prix by 0.8 seconds.

Pulcini took his second podium of the weekend, but only after surviving an attack from Dorian Boccolacci on the final lap.

Boccolacci, who started 10th, saved some of his DRS for the end of the race, which helped him to pass race one winner Callum Ilott on the penultimate lap.

He then tried to pass Pulcini at Turn 3 on the final lap, with Pulcini staying ahead after running deep off track.

As Boccolacci checked up, Ilott ran into the back of them and Alessio Lorandi pounced to pass both for fourth place.

Sixth for Ilott was enough to keep the championship lead he earned in race one, as rival Anthoine Hubert finished in ninth to complete a point-less weekend.

Nikita Mazepin and Niko Kari rounded out the top eight.