written by Valentin Khorounzhiy 17 May 2015 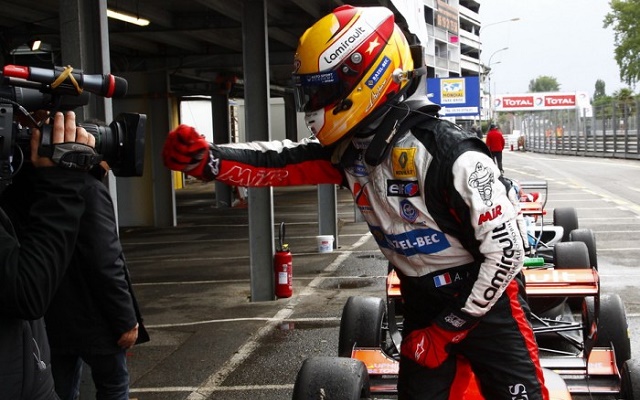 Tech 1 Racing’s Anthoine Hubert will leave the street circuit of Pau unbeaten after taking his second win of the Formula Renault Alps weekend in race two.

Hubert, starting from pole, stayed out of trouble to finish two seconds in the clear.

Despite a plethora of accidents during the race, the only safety car period was called out on the opening lap when Matevos Isaakyan collided with Ben Barnicoat, leading to both drivers’ early exit.

Hubert retained the lead as the field got going on again, while second-placed Jake Hughes had to keep series returnee Matthieu Vaxiviere at bay.

While the status quo was maintained in the top three, there were incidents further down the field. James Allen went off at Virage de la Gare on lap six and Daniele Cazzaniga followed him out of the race by going out in the same corner a lap later.

Martin Kodric then spun out of fourth place and, with six laps to go, Zac Claman DeMelo completed the list of retirements by parking at Virage de la Gare.

Out front, it was Hughes and Vaxiviere joining Hubert on the podium, with Simon Gachet a second off the top three.