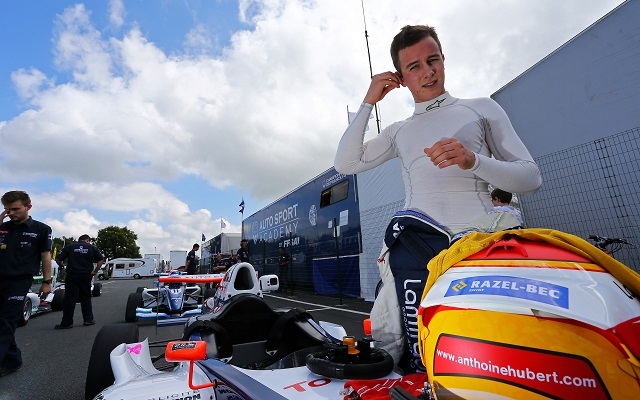 French F4 series champion Anthoine Hubert has kicked off the final round of the 2013 season at Circuit Paul Ricard with a strong display as he took double pole for the feature races.

The young Frenchman, who recently tested with Tech 1 Racing in the Eurocup Formula Renault 2.0, spent most of the qualifying in the lead, briefly surrendering it to Tom Le Coq, whose time was then made void due to track limit infringements.

Despite a seemingly dominant display from Hubert, a number of drivers got close to first. Indeed, second-placed Felix Hirsiger set a time that was just 0.018s off pole, while Ivan Kostyukov trailed the Swiss driver by the very same margin in third place.

The closeness of the laptimes echoed all throughout the field. Dennis Anoschin and Neal van Vaerenbergh wound up separated by one thousandth of a second in fourth and fifth respectively, both finishing within a tenth off the pole time. Meanwhile, Le Coq and Matevos Isaakyan managed to record the exact same time and will start from sixth and seventh.

Remy Deguffroy, Jules Gounon and Tristan Viidas, who all made podium appearances in the previous round at Ledenon, made up the top ten.

On second-best times, which determine the grid for race one, Hubert will lead Kostyukov on the front row, ahead of Hirsiger and Anoschin.