Home Featured How Sainz is ‘doing a Magnussen’ with DAMS in FR3.5
FeaturesWorld Series Formula V8 3.5 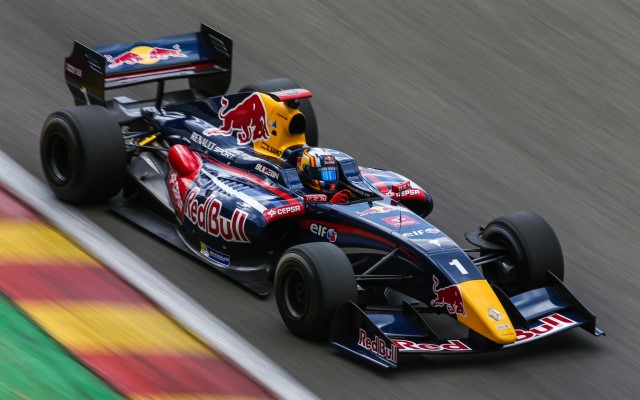 On first thought, comparing Carlos Sainz with Kevin Magnussen seems like comparing Fernando Alonso with Kimi Raikkonen. But while there are many differences between them, there are plenty of similarities too.

They are both second-generation motorsport stars, with fathers who consider themselves to be hands-off but who can’t help but take a keen interest, and whose own career success (or unrealised potential, in Magnussen Sr’s case) has long heaped great expectation and focus on the progress of both. But Carlos Jr and Kevin have plenty more in common that just esteemed parentage.

Both have been highly-rated, long-term members of top Formula 1 team setups. Both impressed considerably in their earliest running in F1 machinery – Magnussen in Abu Dhabi at the end of 2012, Sainz last summer at Silverstone.

Sainz is now leading the Formula Renault 3.5 standings with the same DAMS team that Magnussen claimed the 2013 title with last year. And there are similarities in how they got to that point.

To differing degrees, both were quick adapting to the lower formulae but then struggled to turn their ability into results. Both great on their day, but too inconsistent. They had too many incidents, and too many off-days. They were outshone by lesser experienced drivers.

It’s definitely fair to say that of the pair, Sainz was the greater underperformer. After successful campaigns in Formula BMW and Formula Renault 2.0, his years in F3 and GP3 were certainly not up to expectation. Superb on his day (particularly if that day was a wet one at Spa-Francorchamps), he seemed off the pace at other times and got himself involved in far too many incidents as he attempted to salvage results.

But Magnussen’s 2012 in particular was disappointing too. In his first season of FR3.5, he could only finish seventh. There was bad luck, but also missed opportunities, incidents and a lack of consistent pace. Just as Sainz was overshadowed by FR2.0 graduate Daniil Kvyat in GP3 in 2013, Magnussen’s tough 2012 came in a year when Eurocup champion Robin Frijns was champion.

Last year was always going to be an important one for Magnussen, with the new threat of then Eurocup champion Stoffel Vandoorne joining him in the McLaren stable. If he had lost to the Belgian rookie, it would have been difficult for McLaren to justify keeping hold of him. 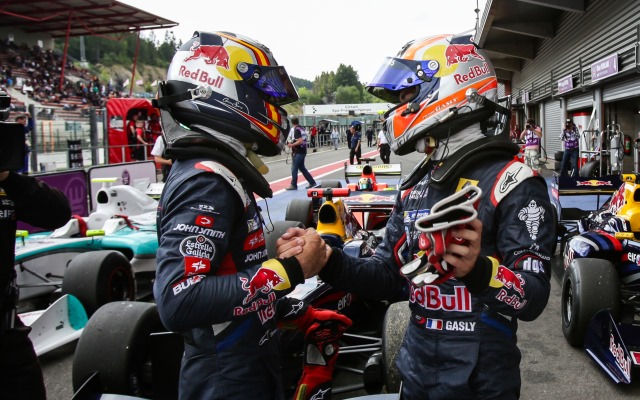 Sainz is having to see off the threat of the impressive Pierre Gasly (Photo: GEPA pictures/Dutch Photo Agency/Sebastiaan Rozendaal)

Sainz has got the similar threat of new in-house competition this year. He lost out to fellow Red Bull Junior Kvyat last year, but they at least came up the ladder together. Vandoorne’s successor as Eurocup champion Pierre Gasly is new to the Red Bull fray and, however good he might be, Sainz should not be being beaten by him if the Spaniard is to be part of the firm’s future. So like Magnussen last year, this is really a must-win season for Sainz.

And DAMS is a great environment for him to do just that. More than just providing a fast car, it was acknowledged that the French team played a big part in turning Magnussen into a complete driver and harnessing his talent last year. And at the moment it seems they’re doing the same with Sainz. A good car has of course been a big help in allowing both to perform, but they have had to make the most of it.

Key for Magnussen’s title charge last year was collecting podium finishes and big points, rather than necessarily wins, particularly early on – he only won two of the first 14 races. He couldn’t always keep up with Vandoorne – Moscow springs to mind in that sense – but the Dane’s strategy worked out for him in the end.

Sainz on the other hand is racking up the wins, with a stunning four wins from the first seven races. But he has taken a leaf out of Magnussen’s book and shown caution when necessary – Monaco being the perfect example. Ominously, just as Magnussen did there last year, Sainz finished fourth and ahead of his chief title rivals. He did take a risk on getting back ahead of Oliver Rowland on the first lap – a stunning but risky manoeuvre that required trust in his rival – but when he later caught Jazeman Jaafar, aware that fourth was enough to extend his points lead, he opted not to go for the podium.

His double win at Spa last weekend has given Sainz a healthy 43-point lead, but it’s not over yet. A double non-finish could see that advantage evaporate, like it did for Vandoorne in Austria last July. He hasn’t passed the test yet, but he’s certainly looking good.

If he gets the job done, Formula 1 will follow. Jean-Eric Vergne is under threat at Toro Rosso, and if Sainz does the business and wins the FR3.5 title it will be fairly easy for the powers at Red Bull to make that change. With those strong test performances in his pocket, a mutual sponsor in Spanish energy firm CEPSA and the same manager as Fernando Alonso, Sainz just needs to do the hard bit on track – and he’s been making that look easy too.

After showing prodigious ability on his arrival in single-seaters, the tough years meant that there were major doubts about Sainz’s ultimate potential. But there won’t be many doubts left if he carries on performing like he has been. 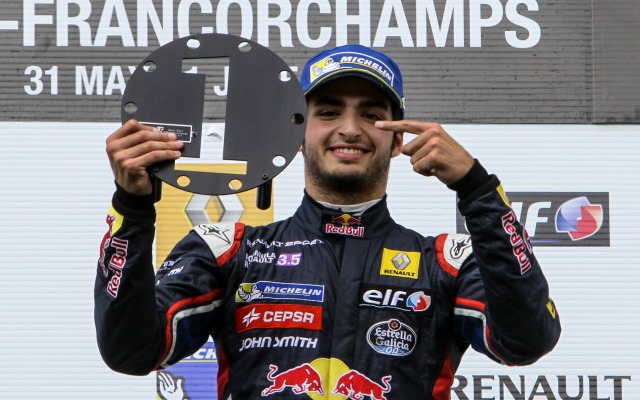