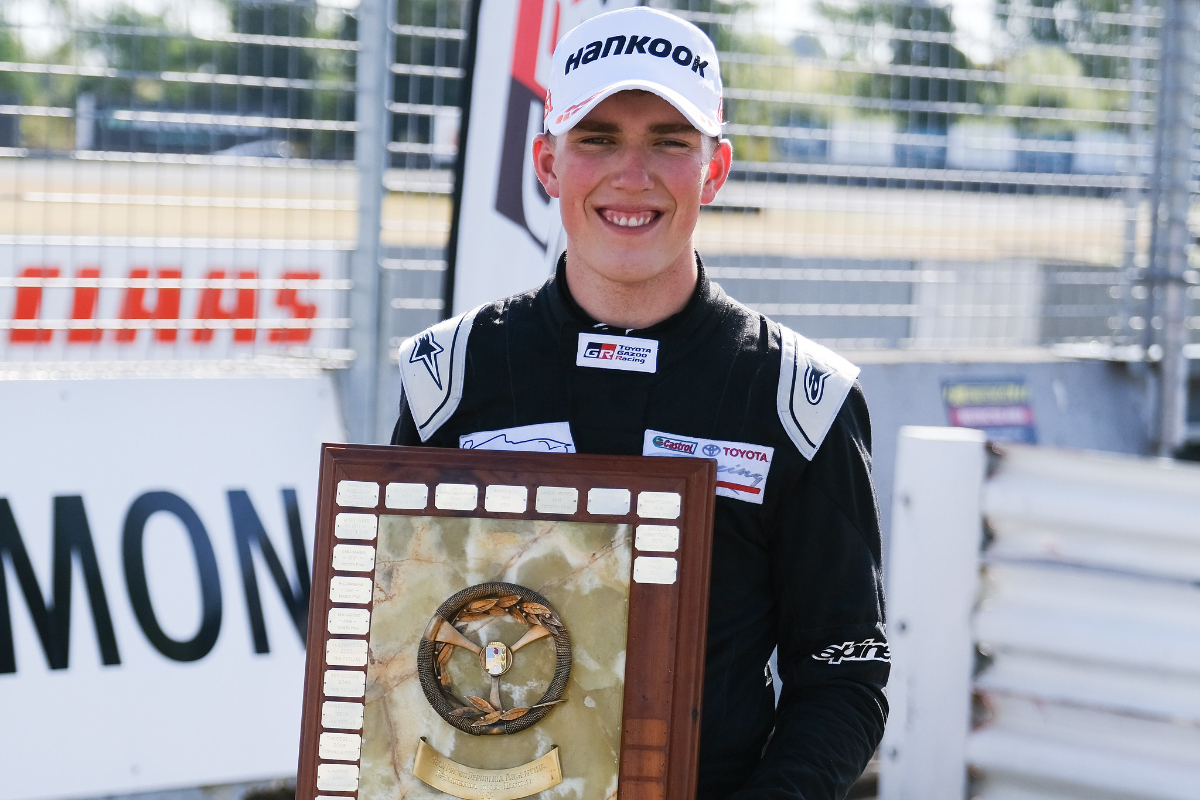 There were guest appearances from New Zealand motorsport icons, but in the end it was a driver almost fresh from karting who aced the Toyota Racing Series this year. He explains how he ended up a title winner

The New Zealand karting scene knew who he was, Red Bull’s Formula 3 star Liam Lawson knew who he was too, and the guys at M2 Competition figured Matthew Payne’s potential too in the middle of last year when the 6’3″ youngster first hopped in a winged single-seater car. But having spent five years in shifter karts, his name was little-known elsewhere.

This was the guy who had been Lawson’s rival when they were rising up New Zealand’s karting ranks, and Lawson had taken the earliest possible chance to move into cars. Payne took a different route, but now both are Regional F3 champions.

After winning the title, Payne had to leave the celebrations to the M2 crew that ran his car, as he flew straight to Auckland – and spoke to Formula Scout the next morning. First of all, he explained how he was able to race in TRS straight from karting.

“Pretty much what happened was I bought a Formula Ford, and I tested that quite a bit before I even thought about doing TRS,” Payne says.

“Then we worked out that we could do TRS, so we did end up doing two meetings in the FFord just to be able to get the license in. And that was probably around the time when we were testing the older generation of the TRS car.”

In the middle of last year, TRS organiser Toyota Gazoo Racing NZ and the Kiwi Driver Fund organised with M2 to run tests for young talents using the old TRS car as well as the current Tatuus FT-60 chassis. It then part-funded several of those drivers’ entries into TRS this year, with most of them stars of the national FFord scene while Payne came from karts.

What were his first impressions of a F3 car? 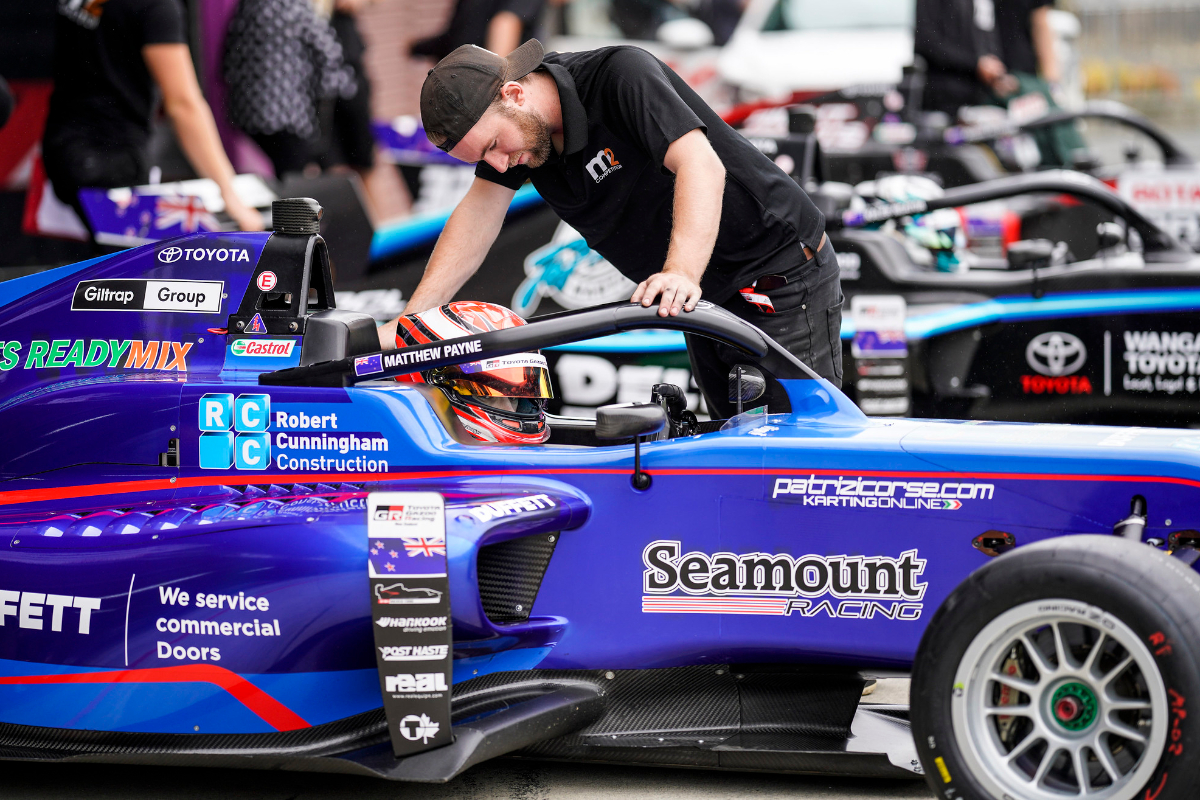 “It was pretty crazy. You don’t think you can carry the speed that you can through the corners. It’s just getting over that confidence barrier and trying to be able to drive on that edge all the time was probably the hardest part. I really enjoyed the car. I’ll probably miss driving it quite a bit, actually, when I’m driving the Porsche.”

A month before the start of TRS, Payne got picked up by fellow Kiwi and World Endurance champion Earl Bamber to race in his Porsche Carrera Cup Australia squad for this year. How come the car racing opportunities have only come now?

“I always planned on doing a lot of karting in Europe,” Payne explains.

“I really enjoyed it heading over there, it’s really, really hard racing. I was building up the ranks, got into a really good team last year with Birel, and COVID-19 happened and we just sort of thought: well, we might as well go now because I don’t know when I’ll be going to get back over to Europe and race in a kart again. A matter of when, for jumping into cars.”

Aiding the learning process was not only data sharing across the TRS grid, meaning there were no team entries, but also the inclusion of some of New Zealand’s best modern-day racing drivers for the Hampton Downs season opener.

“I think that data sharing was a great thing [too]. We’re all watching where each other’s going, and we’re all trying to learn off each other, and I think I had a really good car set-up for the last half of the season. We really worked out what made the FT-60 click, and that helped us that little bit just to streak away during the races.” 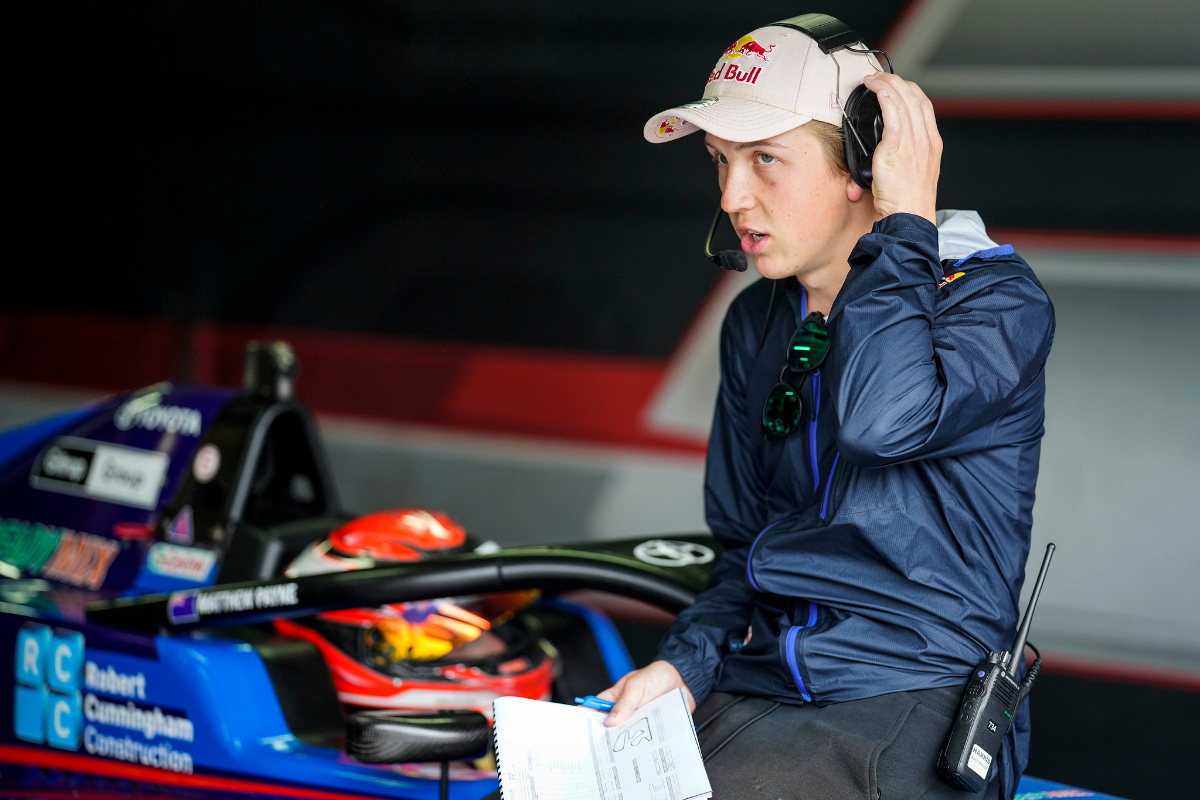 Also in Payne’s camp was old rival Lawson, who engineered him to third place in the New Zealand Grand Prix.

“It was just the first round unfortunately. But he’s been a mate for a very, very long time, and we work really well together because whatever I said on the radio, he could fully understand that and would come back with the right answer. It was encouraging to have someone like that in your corner, and you could relay and match him pretty quickly. That was really good.

“M2 was just mega, because they pretty much know what to do with the car in certain situations,” Payne adds.

“You’d come in and you’d say a bit of feedback, and then they’d be straight on it and be changing the car for five minutes. It was always pretty much right on the money, and you never really had to worry about mechanicals or anything, because the mechanics are just right on it. I don’t think I can thank those blokes enough, they just did so much and it was such a great help to be with someone like me who hasn’t got the most experience in those cars. They were just crucial.”

By winning five of the six races against a grid of only six or seven cars, and leading the other race lights-to-flag before penalties were applied, Payne didn’t actually gain much experience to expand on his racecraft skills outside of the NZ GP weekend and its 16-car grid filled with drivers that literally had decades’ more experience.

“Certainly at the grand prix there was a lot of passing going on, and it required a certain skill that I’d never really used,” he admits.

“It’s not as fast paced as karting is. You’ve got a lot more time to think about what you’re doing, and especially when you’re side-by-side with someone; it puts you off when there’s a big car right next to you, but you’ve still got to focus on what you’re doing, and it was certainly a bit of a challenge at the start getting used to racing around big cars and making sure you’re not running into anyone because you’re not that used to knowing how long the front of the nose of the car is. 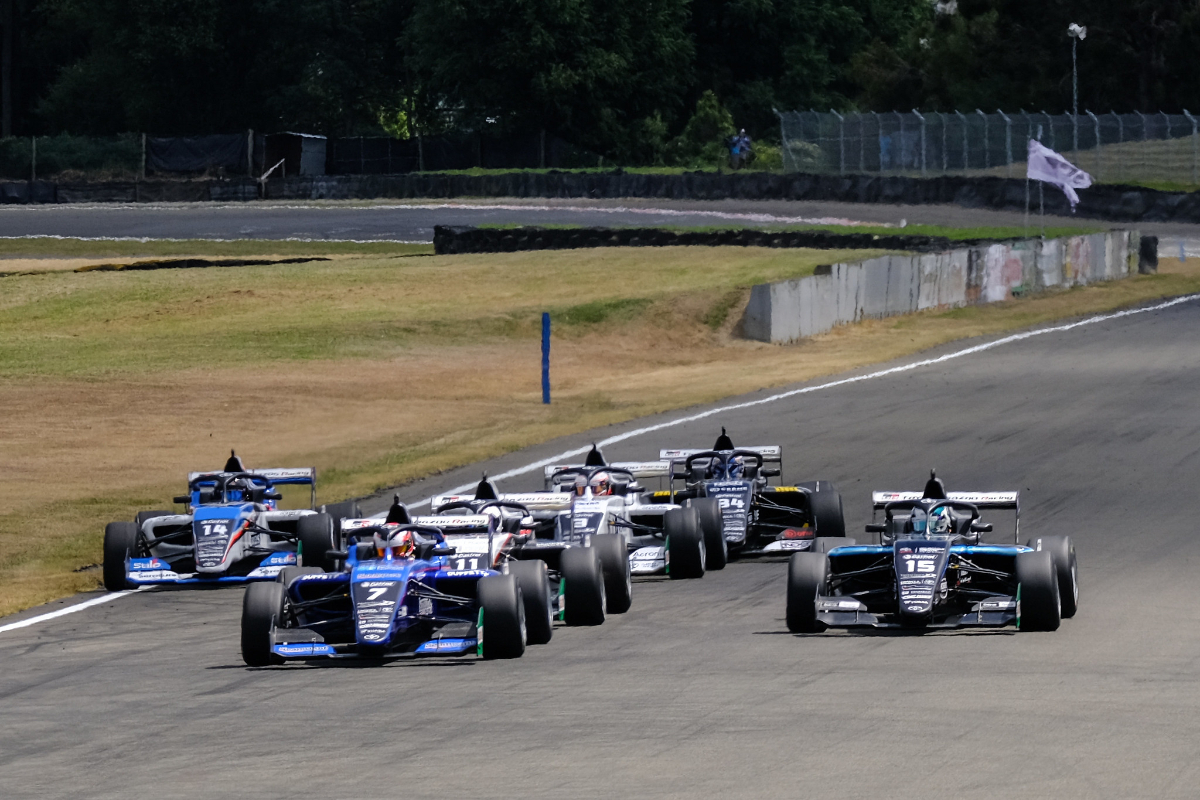 “Being a six-car series at the end was a little bit disappointing, but I still made the most of it.”

The inclusion of professionals for round one was a contingency plan in case international drivers couldn’t attend, which ended up being the case, and Payne says “I certainly hope I’d have given them a run for their money” had they been present. As a result of the older professional drivers taking part the decision was made to raise the minimum weight of the car for this season to reduce the penalty of their additional bulk. And as one of the taller drivers in racing, this actually helped Payne.

His his average starting position was 1.78, and on his debut he was only outqualified by Australian Supercars champion Shane van Gisbergen and Superleague Formula race-winner Chris van der Drift. In the wet session that set the grand prix grid he was fourth, behind M2 stablemate Kaleb Ngatoa, two-time TRS champion Daniel Gaunt and van der Drift, and then he took pole for the remaining six races on Hampton Downs’ National layout and at Manfeild.

“In karting, it was really important. Qualifying is everything in that, and if you’re missing half a tenth you’re minus 15 grid spots. So I’ve been working on that quite a lot, and I don’t think any of the other drivers really realised how important it is just to get that one lap out. It’s all about bringing the tyres in right, not trying to scrub them off too early, and trying to get the maximum out of it as much as you can.”

Payne’s average pace advantage in qualifying was only 0.067 seconds, but he was usually finishing races several seconds clear of second place, wrapped up the title with a race to spare and won the finale by 17.616s. That caught the attention of six-time IndyCar champion Scott Dixon, grand prix rivals van Gisbergen and van der Drift, and of course Bamber. 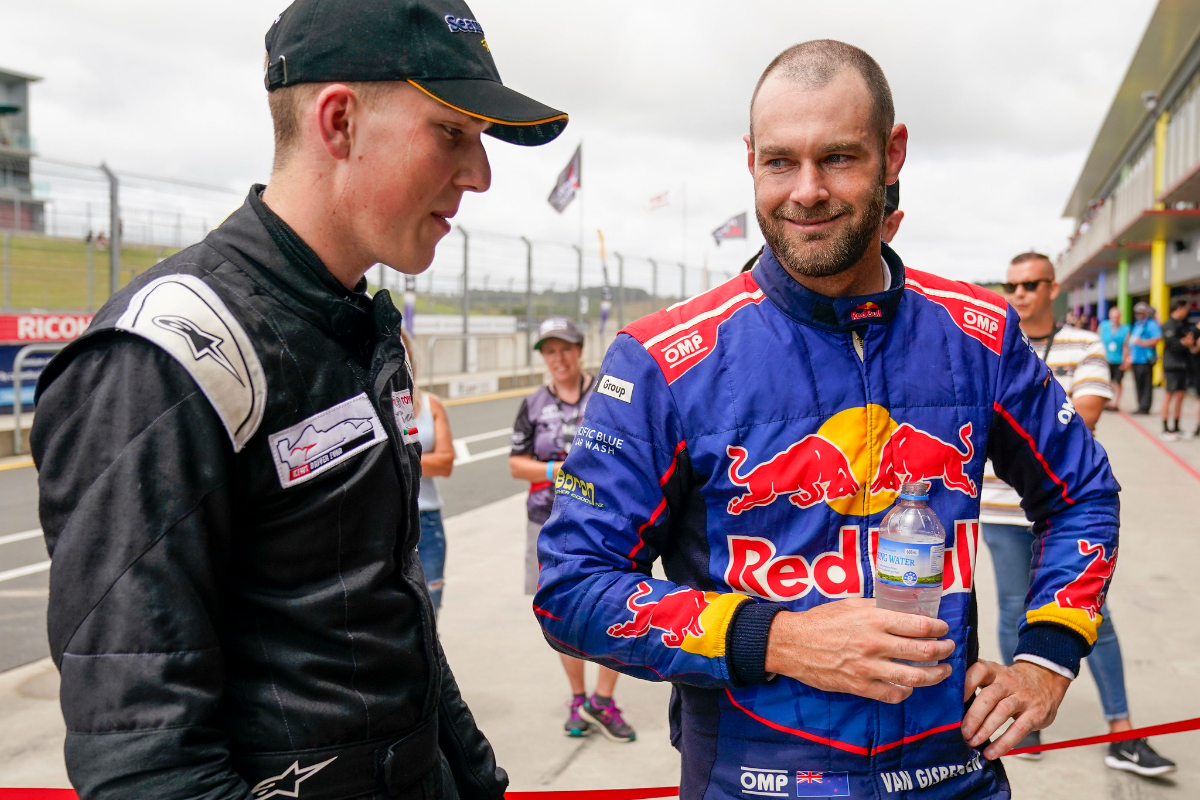 “It’s been really good to hear from them and it’s just encouraging when you’re on front stage with those guys and they’re actually appreciate what you’re doing,” Payne shares, before alluding to what’s planned next with Bamber.

“It’s developing a career in sportscars, I’d say. I’ve always liked the endurance path, especially Le Mans and races like that would definitely be the goal at the end of it.

“Hopefully, he will keep me on for another couple of years if I do any good this year, but it will sure be interesting switching to the Porsche rather than driving something with wings and slicks.”

As Lawson did last year following his 2019 rookie success, would Payne return to TRS for a title defence in 2022 if possible?

“Definitely. I’d say you might see me on the grid next year. Hopefully the internationals are going to come in and we can really see what the pace is and see if I can actually beat them.”