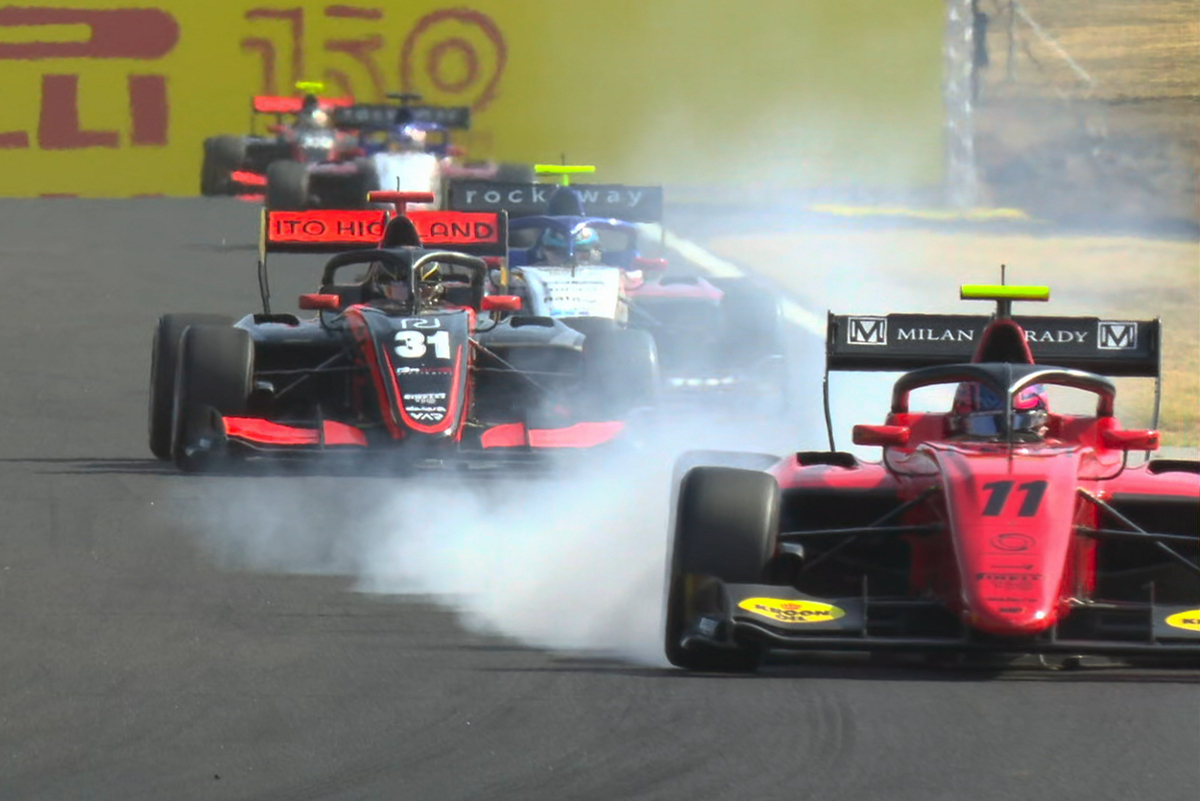 Extremely hot track temperatures posed an extra challenge in FIA Formula 3 qualifying at the Hungaroring, with drivers having to manage tyre temperatures to prevent overheating.

Traffic in the last sector of the lap, which usually caused controversy, proved to be an unintentional benefit for some this time as the lower speeds resulted in tyre temperatures dropping just before the start of flying laps.

“It was hard. The warm-up laps are very different compared to other tracks. We have to drive really slowly, we don’t do any weaving on track,” polesitter Alexander Smolyar said when Formula Scout asked about the particularities of the session.

“In the end, we just stop in sector three, because of the traffic. Sometimes I even had to take the clutch not to stall. Arriving into turn one, the tyre surface is cold, but you really need to decide, or you want the car to be ready, the tyres to be ready in sector one or [and] you will just oversteer sector three, and… we chose what we chose and I think it worked pretty well.”

The MP driver also explained that the team had made substantial changes after the morning’s practice session to make the car quicker, but trickier to drive.

“It’s hard to drive, it’s oversteery. It’s good enough for one lap, but for sure with an oversteery car in the race, it’s not going to work.”

However, Smolyar isn’t worried and affirmed that “we know what to do” in order to avoid suffering in Sunday’s feature race.

“It’s probably even more aggressive than Barcelona in terms of the tyre,” Trident’s Zane Maloney said about the track. “We are on the mediums and not the hards, so it was very difficult to kind of get the first and last sector correct.

“You kind of need to choose one in terms of the balance you are going for and the procedure you are going for. For me, the last sector was very good, but the tyre just wasn’t ready for the first part of the lap, more because of the traffic and having to stop on track.

“For the race, it will be very difficult to keep the tyres alive. I’m sure that degradation is going to be a big thing towards the end of the race, so as much as you want to go forward in the first few laps, you kind of need to think about the long game, and I’m sure everyone is going to be thinking the same, so it should be interesting.”

Prema’s Ollie Bearman echoed those two, saying: “It was a really difficult compromise. Obviously, in an ideal world you wouldn’t be stopping 20 seconds in sector three before you start your lap. Sector one is always really tough, then sector three the tyres are already overheating, so it’s not easy at all. I think it will be a similar story in the race.”