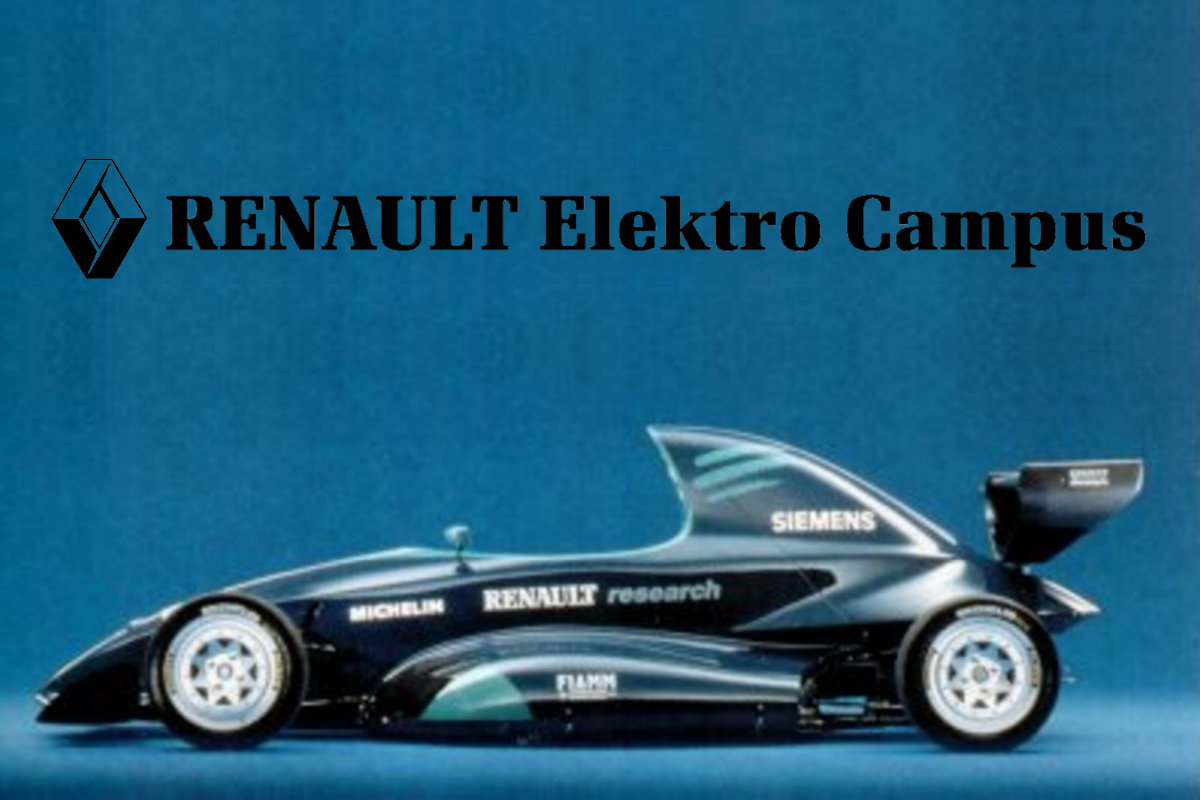 The prototype of an electric single-seater racing car in 1993 brought together the minds and companies that would one day work to create Formula E. But there was no intention to create such a competition at the time

Rounds 10 and 11 of the 2020-21 Formula E season take place this weekend in Brooklyn, New York City. The series’ title sponsor, electricals company ABB, will also be putting its name on the races themselves and reinforcing its presence at the heart of electric single-seaters. And in fact, it’s been invovled for far longer than people realise.

Long before becoming a powertrain supplier in Formula E and winning 16 races and four titles across three seasons from 2015 to 2018, Renault and its in-house design studio presented the first ever all-electric junior single-seater car to the world.

It was early 1993, and the series that would go on to become the French Formula 4 of today had just been launched as Formula Renault Elf Campus and was being organised on the ground by future Formula 3 dominator Signature.

Larger than most Formula Ford cars but smaller than what were at the time Formula Renault 1.7-litre cars, the Campus series’ chassis featured wings at both ends as well as sidepods and an overhead air intake to feed the small and simple engine at the rear. Once that design had been approved and sent off to be built, Renault went back to the drawing board and made it electric.

Rather than have any desire to duplicate its latest championship in a new zero-emissions form, Renault wanted to conduct a design study on electric vehicles and saw a relatively cheap-to-manufacture racing car as being the best platform to do that.

The Renault 4 and 5 city cars (being revived as EVs today) were sold as electric models in a limited run in the early 1970s, with bulky lead-acid batteries and a direct current motor powering the front wheels, and were design studies of sorts too. The results didn’t change Renault’s fossil fuel-powered direction, so it had little experience with EVs over the next 20 years.

That meant it had to team up or consult with several big-name companies with electrical expertise to create 1993’s ‘Elektro Campus’, which like later racing projects was backed by fuel supplier Elf, and the first of these was Swiss company ABB. 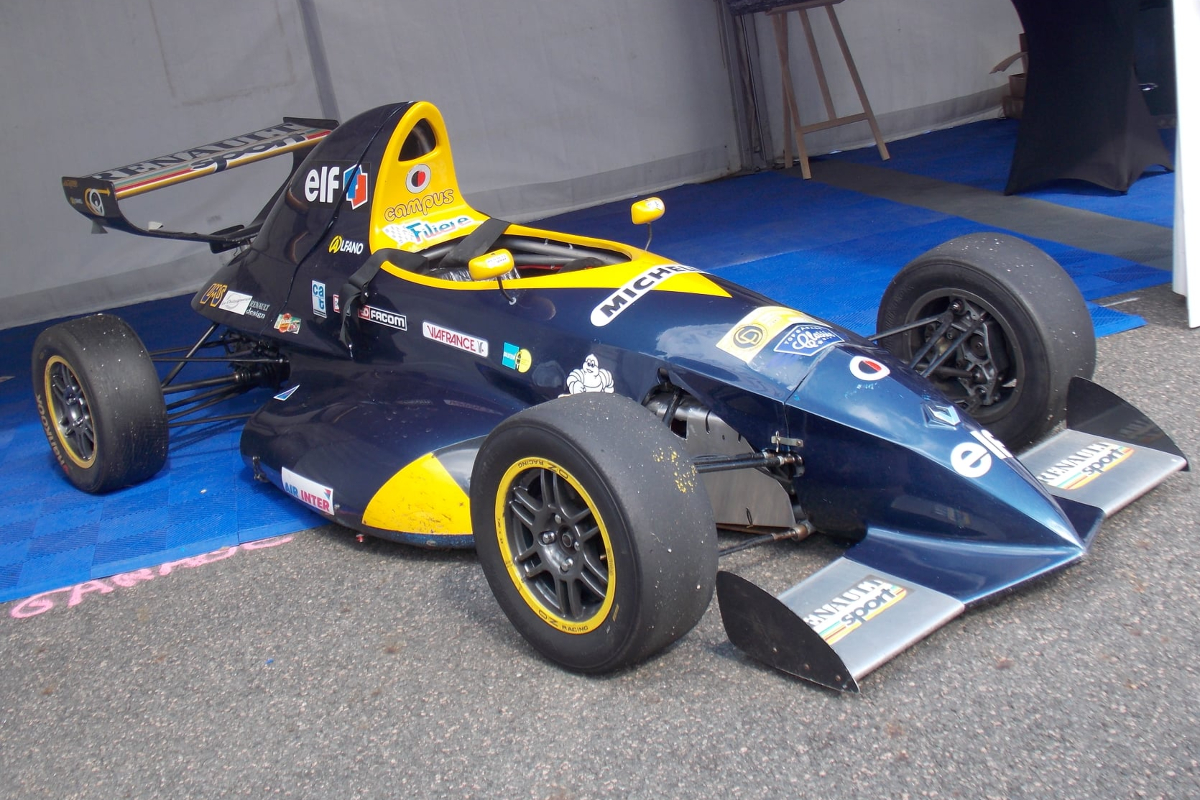 In 1988, Ford had commissioned government-sponsored research into “the state of development of sodium sulfur traction batteries” after pioneering and then giving up on the automotive use of the technology two decades prior, and used ABB’s existing EV batteries as one of two leading examples for comparison. The research was picked up by others in the fields of energy and automotive, and there were further reports with the intention of tracking the development of the batteries of ABB and its rivals, where they could be headed next, and if sodium sulfur was suitable for road use.

There was obvious advantages to that battery type when it came to energy storage and recovery, and therefore performance too, but it had a high operating temperature that needed to be maintained and made it difficult to match to moving vehicles.

By 1993, ABB in particular had worked on not only improving the efficiency of its EV batteries – made up of the energy-storing cells, a temperature-maintaining casing and a heating system that both warmed the battery up and removed excess heat – but making them fit better around the design features of cars on the market.

The tubular shape and size of its batteries sped up development as it was now easier to integrate them into vehicles to test both passively and destructively. They were crash-tested, fire-tested, put into the extremes of several other elements, and prototypes with higher capacities (and therefore better performance) had already been approved for use on German roads while the United States heeded caution until more research was done.

Given most spec racing cars used road-derived components, it therefore meant the best place for Renault to find a suitable battery would be from the road. But on the road it was lead-acid batteries, with lower temperatures and performance levels but better suited for starting a car, that were more widely seen and therefore more appropriate for the project.

Consulting ABB’s R&D had been useful, but it was a 50Ah 12-volt lead-acid battery setup from Italy’s FIAMM – a brand that already had motorsport success and right now is a research partner of ABB – that ended up powering the motor in the Elektro Campus, and many more Renaults after that. 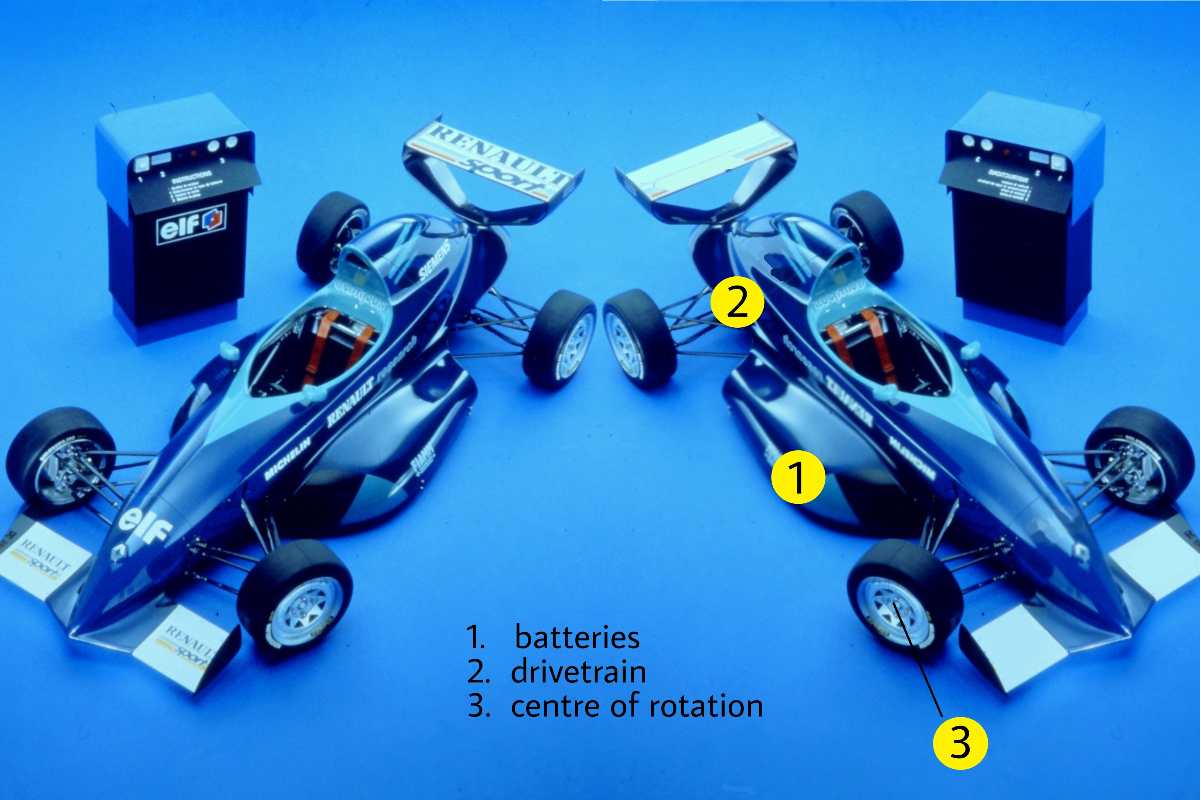 The setup for this within the car was by having a series of six ‘standard’ road car batteries fixed to the bottom of the sidepods on either side. Doing it this way rather than laying them out in parallel allowed the voltage to be built up from each cell when a constant current was used, providing the 12V number.

While the chassis was light, the percentage of the mass of the vehicle taken up by the batteries was incredibly high. However, with the batteries being positioned so low, the centre of gravity was not only lower than the petrol-powered car’s but also below the centre of rotation of the wheels (the height at which the axle meets the wheels and the point around which the wheel rotates). This would have made for great handling around corners, had it not matched F3 cars for weight.

At the back was a manual gearbox supplied by Renault and Siemens’ water-coooled alternate current 1PV5 induction motor with vector control. This also used up space as it was a form of power electronics (PE) making delivery of the power, and therefore the motor’s speed, more controllable when discharging the batteries for use. Even 15 years later when Formula 1 teams were developing energy recovery systems, PE could use up as much space as batteries and further compromised centre of gravity.

Siemens is another brand that has been heavily immersed in FE, as it actually supplied the twin electric motors for FE’s predecessor car – the Formulec EF01 of 2011 – and its computer-aided design (CAD) software was used by Andretti Autosport for its top single-seater programmes as well as Spark Racing Technologies to design the upgraded two-level front wing that FE introduced in its third season.

The electric racing car involvement of ABB and Siemens has led to both being consulted on car design to ensure seamless integration of powertrain components, and ABB has taken its experience developing electric infrastructure for buses to FE powertrain providers BMW and Porsche to work on super-fast charging at 450kW. FE cars currently race at 250kW, and are expected to jump up to 300kW when the ‘Gen3’ car, with ABB’s input, is introduced for the 2022-23 season. 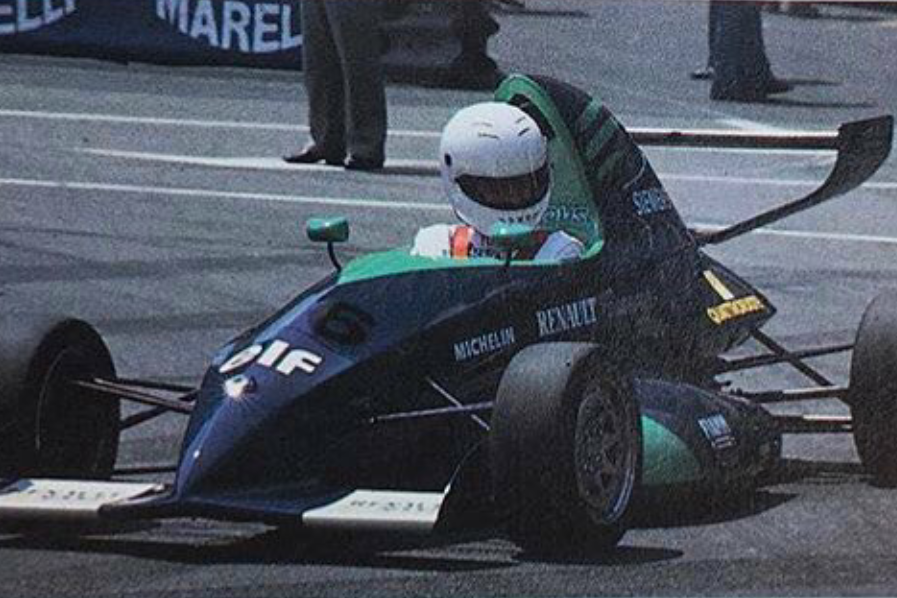 Other names involved in the Elektro Campus project included Michelin, the spec tyre supplier of FE today, and Electricite de France which provided the hardware to charge the car from. So did it ever visit a track in anger?

There was at least one test in France, and a public unveiling, display and demonstration at the 1993 Monaco Grand Prix.

Renault claimed that the Elektro Campus would be capable of covering 250 kilometres on a single charge if driven at 40km/h, with a top speed of 170km/h (105mph), a maximum power output of 50kW through the wheels and 12.7kgm of torque before hitting the upper rev range using the old-school transmission. Its 0-62mph time was said to be 11 seconds.

Probably the only driver who can accurately comment on the performance figures is Renault’s World Rally Championship hero Jean Ragnotti – a two-time French Rally champion – as he was the one who got behind the wheel on the streets of the principality.

The car was presented in a rather predictable blue livery – which has long-held connotations with electric power – and it’s worth noting its upper intake features a logo strikingly similar in shape and colour to the one FE has used since its creation.

Beyond the names and the logo, really very little from this car transferred itself in any way to FE. Battery technology for automotive applications had switched focus to lithium-ion, which has massively improved capacity and density, the advantages of using twin traction motors were discovered (until FE stamped out Nissan’s design) and all motors are equipped to run in reverse for regenerative braking to put charge back into the batteries. Everything is cleaner, lighter, more efficient and simply more capable of holding up to the demands of FE’s street circuits across the globe.

The Elektro Campus, which had single shock absorbers for its suspension design, may well have exceeded the vibration limit of its motor had it really been put to the test in racing conditions and its low centre of gravity would likely have been ruled out on safety grounds due to how little protection there was between the batteries and the bottom of the tubular chassis. 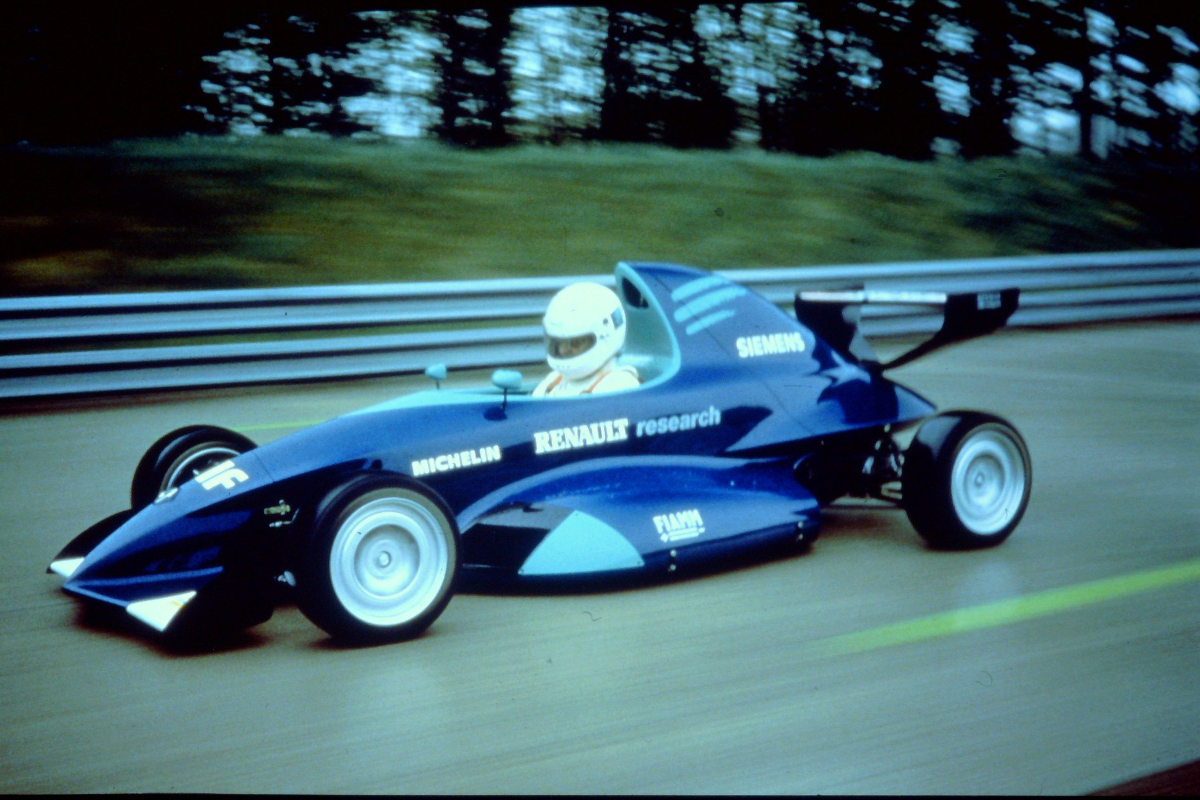 Formula Scout hasn’t been able to track down where the car is now, although Signature’s Patrick Sinault suggested the chassis may have been converted to petrol-running trim and made use of at a racing school in the years after.

Electric racing cars based on road cars have higher centres of gravity because no matter how low engineers want to put the batteries, there is wiring and parts of the tub bolstered for safety that will line the floor of the car instead. Their transmissions are enclosed too, which for small single-seaters isn’t the case and means rear-end contact can easily be race-ending.

Although Formula Student and other electric car competitions exist, the Renault Elektro Campus is likely to be the closest an entry-level all-electric single-seater racing car that could be mass produced gets to a race track for a little while longer.

Firstly, the FIA would need to write up new regulations and homologation requirements for such cars and different training would also be required for those working on them. That applies equally to bringing in all-new spec cars to the junior single-seater ladder, but also to fully electrifying existing machinery.

F4 has already successfully raced with hybrid power, but the KCMG car designed specifically to encompass the more complex power unit was larger than other first-generation cars and the new-for-2022 second-gen chassis are all following the design direction of making the cars bigger to incorporate the halo cockpit protection device and adaption to hybrid spec.

The big difference between 1993 and 2021 is back then Renault had the finances and wanted to feed the interest, and now few have the finances (or the board’s approval) to make something similar but a lot of competitors have the interest. 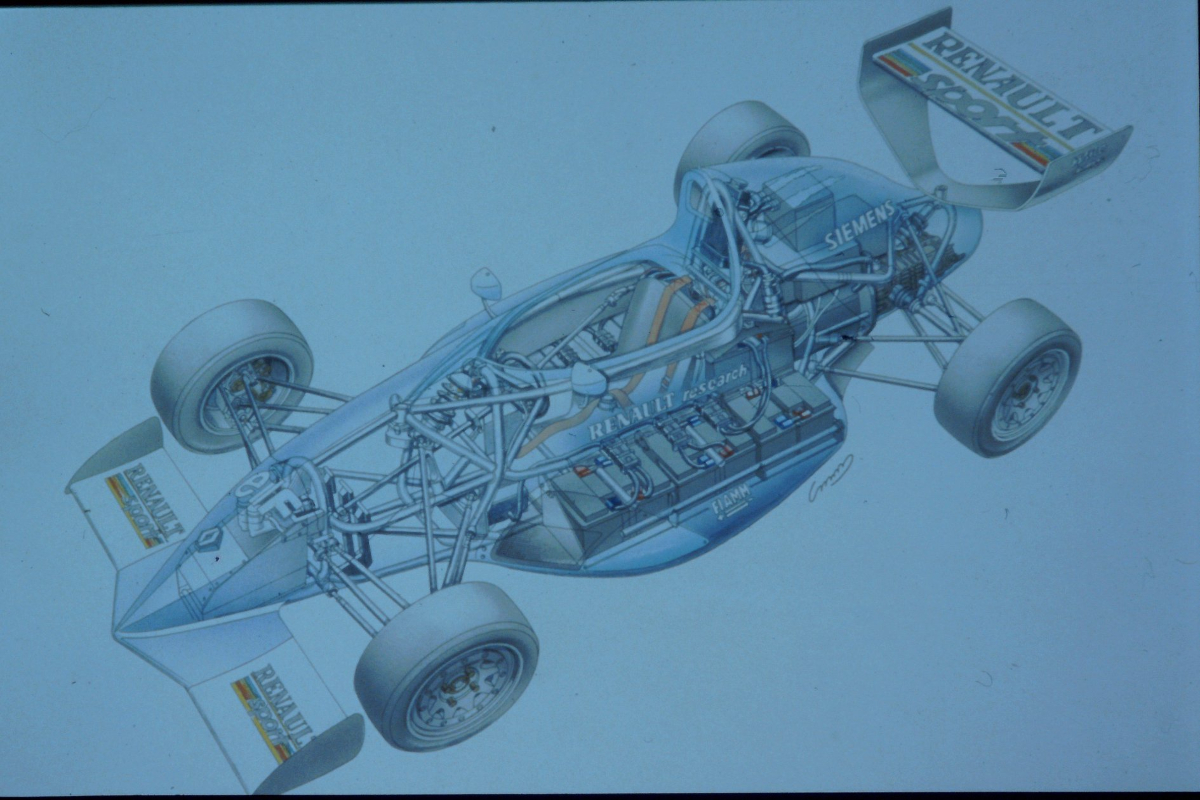