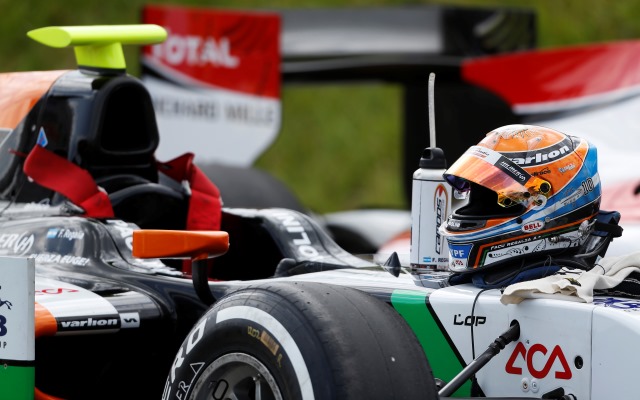 Hilmer Motorsport have issued a statement countering allegations made by?Facu Regalia against the team when he announced his split from the GP2 team earlier this week, and brought in Jon Lancaster to replace him for this weekend’s races at Silverstone.

2013 GP3 runner-up Regalia had a poor start to the season with the German outfit, managing a best result of 17th and retiring from all four feature races run so far.

When announcing that he would not race for the team at Silverstone, Regalia alleged that Hilmer had not given him a competitive car and that he had suffered problems with the set-up of his car and with his engine.

In a statement issued on Thursday, Hilmer said that Regalia’s car has been competitive and that three of his four retirements had been down to his own driving errors.

“Regalia always has been given a competitive car, the results of the pre-season testing prove this fact by constantly being classified in top positions.

“In rating the results of the season so far, it also has to be taken into account that in three out of four main races the driver wasn?t able to finish the race because of driving mistakes and that he had to retire prematurely. The reasons for these retirements are neither the fault of the team or technical problems.”

The team also outlined that they believe there have been no issues with the performance of the engine in Regalia’s car.

“Facu Regalia?s objections about a lack of engine power are from our point of view baseless accusations,” continued the statement. “The GP2 standard engines are being supplied by Mecachrome, the engine supplier analyses the data and controls each engine regularly. During these controls the engine of Facu Regalia has been approved and reported that there are no problems.

“Hilmer Motorsport wants to emphasise again that we fully trust in the engine supplier and that we never had any problems with the performance of the engine. We would like to thank our engine supplier for the trustful cooperation so far.”

Hilmer concluded its statement by saying that Regalia still has a contract with the team.

“We would like to point out that Facu Regalia has got a contract with Hilmer Motorsport until the end of the season and that this will be complied with. We kindly ask for your understanding on this situation due to legal proceedings.”

In a separate announcement, the team welcomed Lancaster back to the team in which he won back-to-back sprint races last year at Silverstone and the Nurburgring.

“Since Facu Regalia didn?t comply with his contract until the end of the season and only informed us a few days ago that he will not race with Hilmer Motorsport anymore from the event in Silverstone, it was extremely difficult to find a replacement in the shortness of time,” said team owner Franz Hilmer.

Lancaster, who contested the opening round of the 2014 season in Bahrain with MP Motorsport, said: ?I am very thankful for this opportunity to come back to Hilmer Motorsport what is kind of my GP2 home after last year.

“If we could repeat what happened here last year with our race win we would be pretty happy. I know the team very well and it?s hard to believe what happened to the team this year so far. I hope that we can prove that we are still a winning team and I will give everything to have a good result.?

Ruapuna and Taupo return to TRS schedule for 2015