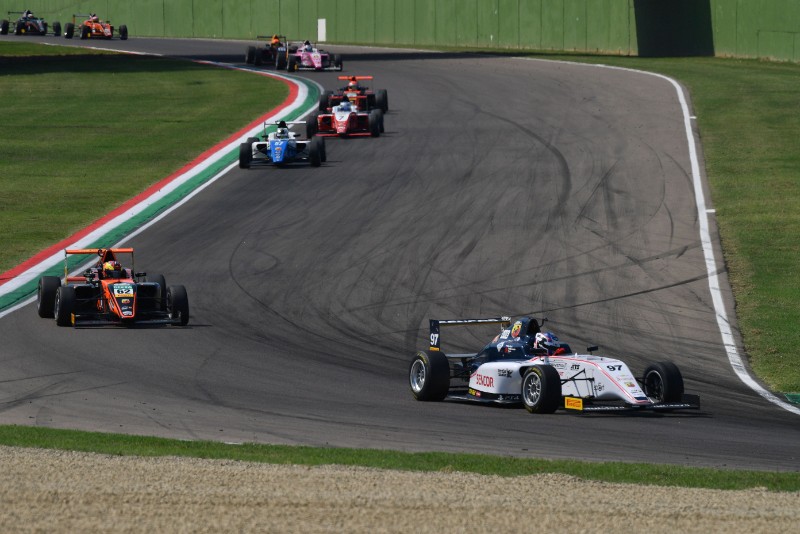 Dennis Hauger extends his Italian Formula 4 lead as he and Roman Stanek won the second and third races at Imola.

Both races boiled down to one lap dashes to the finish after late safety car periods, and both started with Stanek in the lead having taken a double pole.

In race two, Stanek made a good start, helped by fellow front row starter Jonny Edgar stalling. Sauber junior Stanek had a lead of a few seconds before William Alatalo span into the gravel, bringing out the first safety car of the race.

Once the incident was cleared, Stanek was able to pull away again as title rivals Guanluca Petecof and Dennis Hauger battled for second place. His lead was reduced once more though when Lucas Alecco Roy and Sebastian Estner clashed.

The race restarted with 10 minutes on the clock but was again paused when Filipe Ugran, Amna Al Qubasi and Nicola Marinangeli came together. All three cars came to a stop on track, prompting the third and final safety car of the race.

Racing resumed with one lap left, with Stanek taking the chequered flag 0.6 seconds ahead of Petecof and Hauger. Mikhael Belov finished fourth, with Edgar completing the top five thanks to a last-lap pass on Paul Aron.

Hauger stuck closer to Stanek at the front of the pack in the third race, and after several laps pulled alongside his rival down the pit straight to take the lead.

Once ahead, Hauger rapidly built a gap to the rest of the field as Belov demoted Stanek to third. Belov was then given the opportunity to challenge for the lead when Santiago Ramos crashed and brought out the safety car with 1m40s left on the clock.

The last lap dash was won by Hauger, the sixth time he has taken victory this season, ahead of Belov, Stanek, Aron and Edgar – who had climbed up the field after running wide on the opening lap.

Title contender Petecof stalled on the grid, dropping outside the top 20 on the opening lap. He was eventually able to get going and began to regain positions. He was up to 14th before the safety car, which neutralised his progress and now leaves him 43 points Hauger.