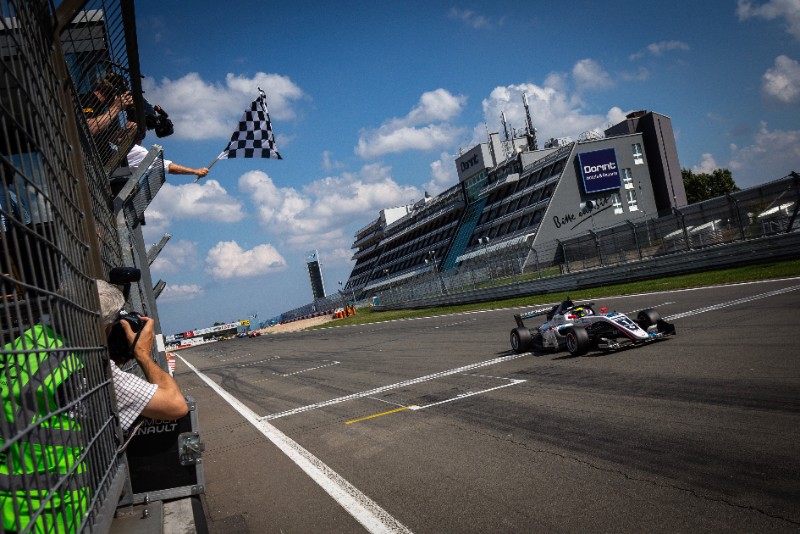 Oscar Piastri dominated the second Formula Renault Eurocup race at the Nurburgring, despite losing the lead at the start.

The Australian lost his pole advantage to impressive single-seater returnee Alex Quinn off the line, but Piastri had already reclaimed first place before Turn 2.

From there he pulled away continually, ending the 17-lap race with an advantage of 14.823 seconds. At the same he stretched his points lead to 40 points, with title rival Victor Martins reporting a problem on the warm-up lap and then failing to start the race.

Quinn, in just his second single-seater race since competing in British Formula 4 two years ago, kept a steady pace behind and took a trouble-free second place.

At one point he did come under pressure from Petr Ptacek, who made several attempted moves in the the first sector on one lap.

This put the Czech driver into the clutches of Piastri’s R-ace GP team-mates Caio Collet and Alexander Smolyar, who he held off lengthy pressure from until the penultimate lap.

There was little other overtaking in the trains of cars that formed behind Quinn, with Xavier Lloveras beating Lorenzo Colombo and Kush Maini to sixth place despite multiple lock-ups.

Ugo de Wilde and Frank Bird rounded out the points, the latter doing so despite a lap one incident which launched Federico Malvestiti over the kerbs of the final chicane.

Patrik Pasma, who finished second in the first race of the weekend, failed to set a time in qualifying after stopping on track and fought his way through to 12th in race two.