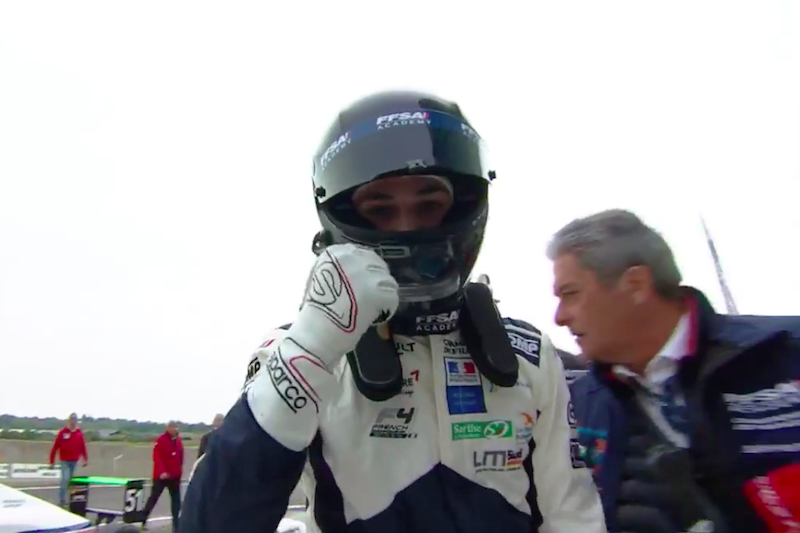 Hadrien David scored a dominant second win in the third and final race of the French Formula 4 opener at Nogaro.

The 15-year-old gradually pulled away from second-placed Reshad de Gerus, finishing 7.868 seconds clear at the end of the 20-minute race.

Nicky Hays recovered from a poor start to finish in third place ahead of front-row starter Enzo Valente.

American driver Hays started fifth on the grid but completed the first lap in eighth position, before moves on Evan Spenle, Gillian Henrion and Isack Hadjar in successive laps. Hadjar, 14, had been pressuring Valente for third before being swamped by the pack headed by Jules Mettetal and Hays.

A couple of laps later, Hays passed his fellow Winfield-backed driver Mettetal into the Ecole hairpin after forcing his rival to go deep.

Hays took third from Valente around the outside of the same corner with five minutes remaining, in which time he reduced his deficit to de Gerus from five to two seconds.

Mettetal attempted to also pass Valente before the end but spun in Turn 1 on the final lap, having broken off the front of his car’s nose against the rear of his rival on the pit straight.

That gave fifth place to Henrion, while Stuart White and Mikkel Grundtvig had to take to the grass to avoid the spinning Mettetal, promoting Valedemar Eriksen to sixth from 16th on the grid.

Hadjar finished 16th after serving a drive-through penalty for a jump start, with Mettetal the final finisher in 18th. Spenle retired following a high-speed off at Turn 1 as he fought with Henrion.