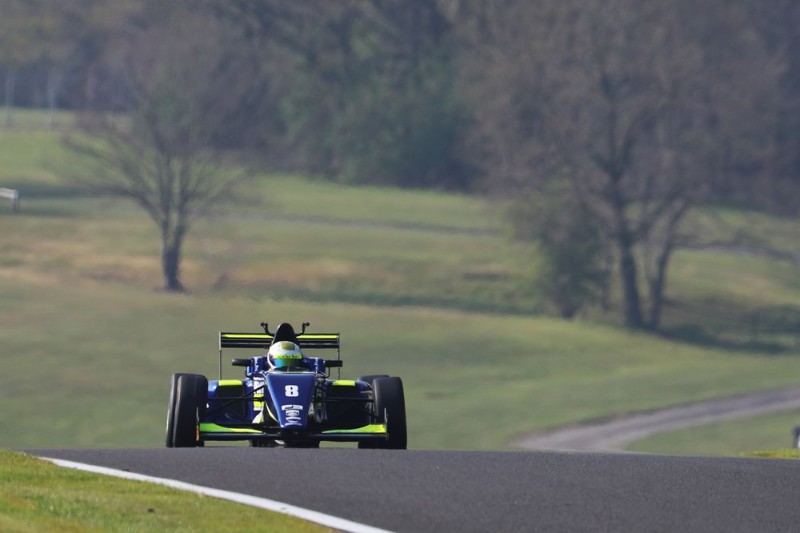 Kaylen Frederick converted pole position into his maiden BRDC British Formula 3 win in race two of the opening weekend of the season at Oulton Park.

The Carlin driver – who claimed pole position for race one on Saturday – started race two from the front row after a difficult debut in the opening race of the weekend.

Frederick led off the line and straight away started to create a gap to fellow American Neil Verhagen, which grew to just over two seconds by the end of lap four of 13. Verhagen then slipped further back, leaving Frederick to take the chequered flag with a 4.980s victory margin.

Verhagen wasn’t troubled in second place though, with a comfortable gap ahead of Fortec’s Manuel Maldonado, busy holding off Kiern Jewiss for much of the race.

Hillspeed’s Sasakorn Chaimongkol finished on the road in fifth after getting past Josh Mason on lap nine. However, a 10-second time penalty given to Chaimongkol for a false start meant that he was classified 13th.

Mason had kept the rest of the grid behind him and inherited fifth place as his reward, with race one winner Clement Novalak 0.541s behind in sixth.

Ulysse de Pauw (Douglas Motorsport) and Johnathan Hoggard (Fortec) finished race two in seventh and eighth respectively, and are the closest to Novalak in the standings.

Kris Wright and Hampus Ericsson were involved in a collision on the opening lap which left Wright having to retire on the spot while Ericsson finished the race three laps down.

Chris Dittmann Racing’s Ayrton Simmons – who has pole position for the final race of the weekend – was the only other retiree from the race after he came to a stop on lap six.