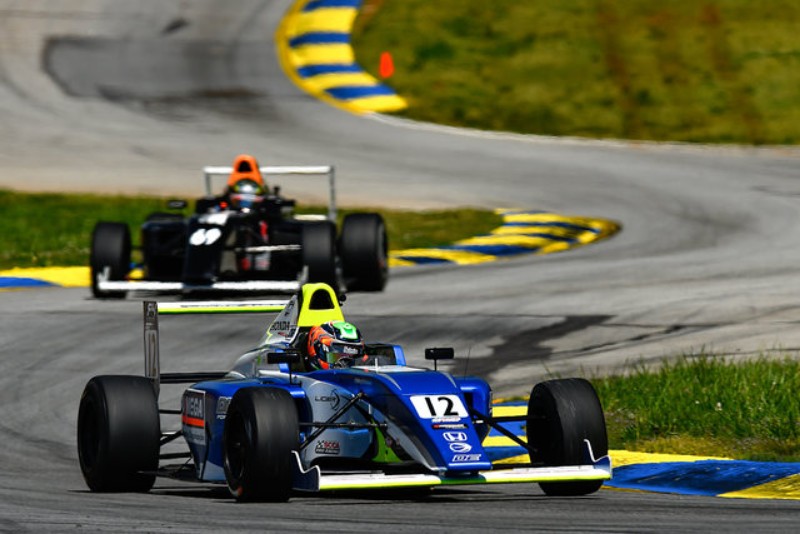 The United States Formula 4 championship got under way at Road Atlanta, literally under a cloud as qualifying was cancelled due to poor weather.

Britain?s Teddy Wilson won the first race from Brazilian Kiko Porto, after Christian Brooks was disqualified from second place due to a non-functioning transponder on his car. Poleman Joshua Car of Kiwi Motorsport was fourth in the changing conditions.

Car?s pace was proven again in the third race, which he won by 0.720 seconds from team-mate Arthur Leist and DEForce Racing’s Porto, who by beating Jose Blanco-Chock to third denied Kiwi Motorsport a podium lockout. Porto was the winner of the second race, beating Dylan Tavella and Blanco-Chock.

Jonny Wilkinson, one of five drivers from Jay Howard?s team, had started on pole for the latter two races but struggled, finishing 14th and 18th.

While US F4 enjoyed grids of more than 20 cars, the South East Asian championship suffered from its clash with the French F4 championship, but nevertheless had exciting racing and a new championship leader thanks to Hadrien David’s absence.

Irishman Lucca Allen took his place at the top of the leaderboard after winning the first and third races at Sepang. Poleman Josh Smith was runner-up both times before claiming his own win in the final race. Race two was won by Elias Seppanen, another new winner, who forced his way through from twelfth place on the grid.

Returning drivers Alister Yoong and Shihab Al Habsi were the chief beneficiaries of the reversed grid for race two, finishing second and third. They had started from the front row after colliding in the first race, a incident that necessitated the appearance of the safety car.

Seppanen credited his starts for his strong performance, which included a third, second and fourth place.

Allen and Smith also overcame the disadvantages of the reversed grid in race three, finishing first and second, ahead of Indian driver Arya Singh, who netted a surprise podium. Smith then scored a commanding victory from pole in the final race.

The people behind Formula Academy Finland helped out with a new Russian F4 championship at the weekend, continuing with the support of F4 North European Zone promoter SMP Racing, and it shared its first race with a group of Formula Renault 2.0 chassis at Fort Grozny Autodrom.

SMP Racing protege Pavel Bulantsev, who finished sixth in FAcademy Finland and seventh in F4 NEZ last year, took a dominant win in the 20-lap race, beating not only his F4 rivals but all the drivers in the faster machinery. Ivan Nossov finished over 10 seconds behind in second, with fellow SMP junior Alexey Nessov completing the podium.

The seven-round season is based entirely in Russia, and finishes on the Russian Grand Prix undercard in Sochi.