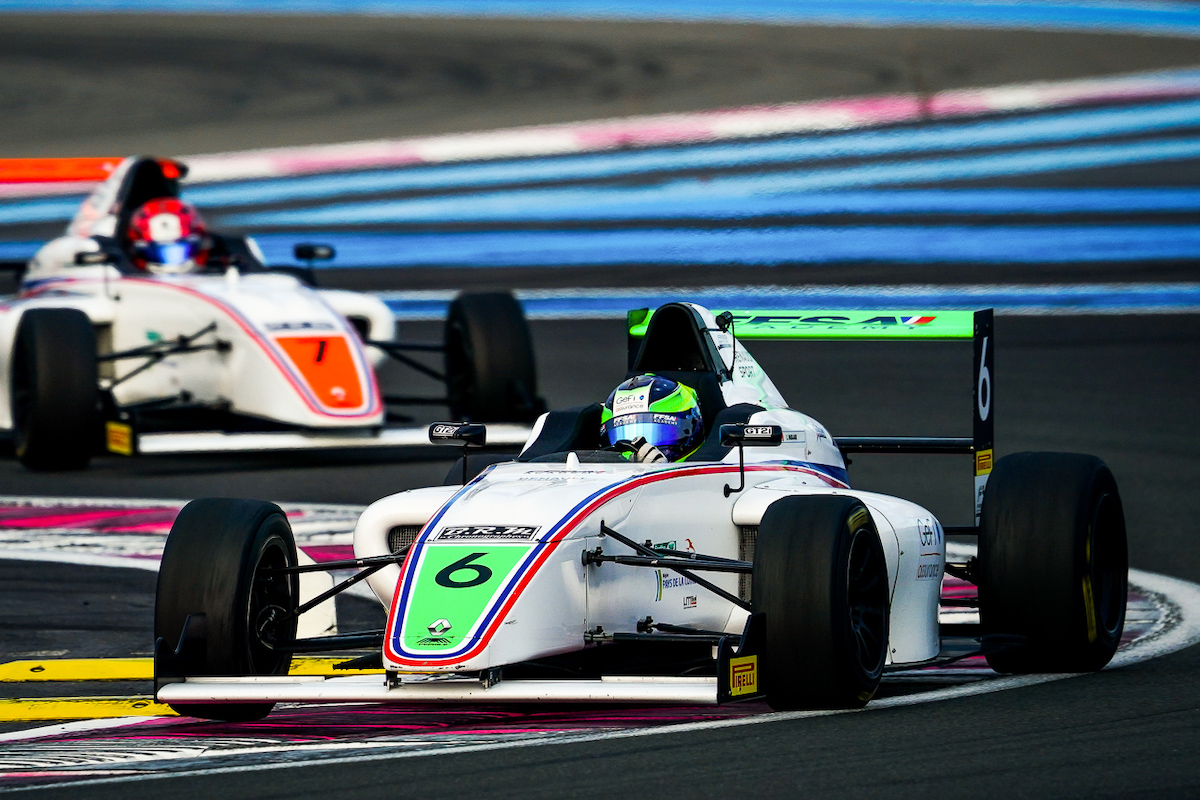 Hadjar passed Ayumu Iwasa on the opening lap of race one on the circuit’s short ‘3C’ layout to claim his third win of 2020.

He made his move in the middle sector of the lap, which begins by turning right where the pit exit is and joining halfway down the Mistral Straight. It utilises the straight’s ‘North’ chicane and an unchanged final sector to run to 3.8km rather than the layout usually used that is close to 5.8km.

Hadjar finished lap one 0.145 seconds ahead of Iwasa, and the newly-crowned champion kept coming at him, with Iwasa just two tenths of a second behind as they entered the final third of the 15-lap race.

In the end Hadjar was able to create a slight gap, and finished 0.846s clear of the Honda junior.

Fellow Honda protege Ren Sato passed Sami Meguetounif for third on lap one, but the Frenchman reclaimed the place next time by to round out the podium. Sato faded to sixth, behind guesting karter Esteban Masson and Marijn Kremers.

Owen Tangavelou started the reversed grid second race of the day from pole, with Cabirou alongside him on the front row.

Wheelspin and a timid defence of the first corner by Tangavelou led to Cabirou taking the lead on lap one, and he turned it into a controlled first win.

Valentino Catalano demoted Tangavelou to third at the start of lap two, and he continued to lose places as the race went on. Sato, after a brave move at the high-speed Signes right-hander, and Rafael Villagomez joined the front two in breaking away from the rest of the field, with Kremers leading a huge battle for fifth.

Meguetounif exited that battle after his car came to a halt on track, and the top four were drawn back in.

Villagomez passed Sato for third at half-distance, and a few laps later Kremers also found a way by after several corners of side-by-side action. By this point Villagomez had also passed Catalano for second, but was almost three seconds behind leader Cabirou.

Sato then had to worry about Hadjar and Iwasa, who had been fighting each other all race, while Kremers closed in on Catalano.

The battles converged on the final lap, with Kremers losing out against Catalano and then falling behind Sato, Hadjar, champion Iwasa and even Romain Leroux to finish eighth.