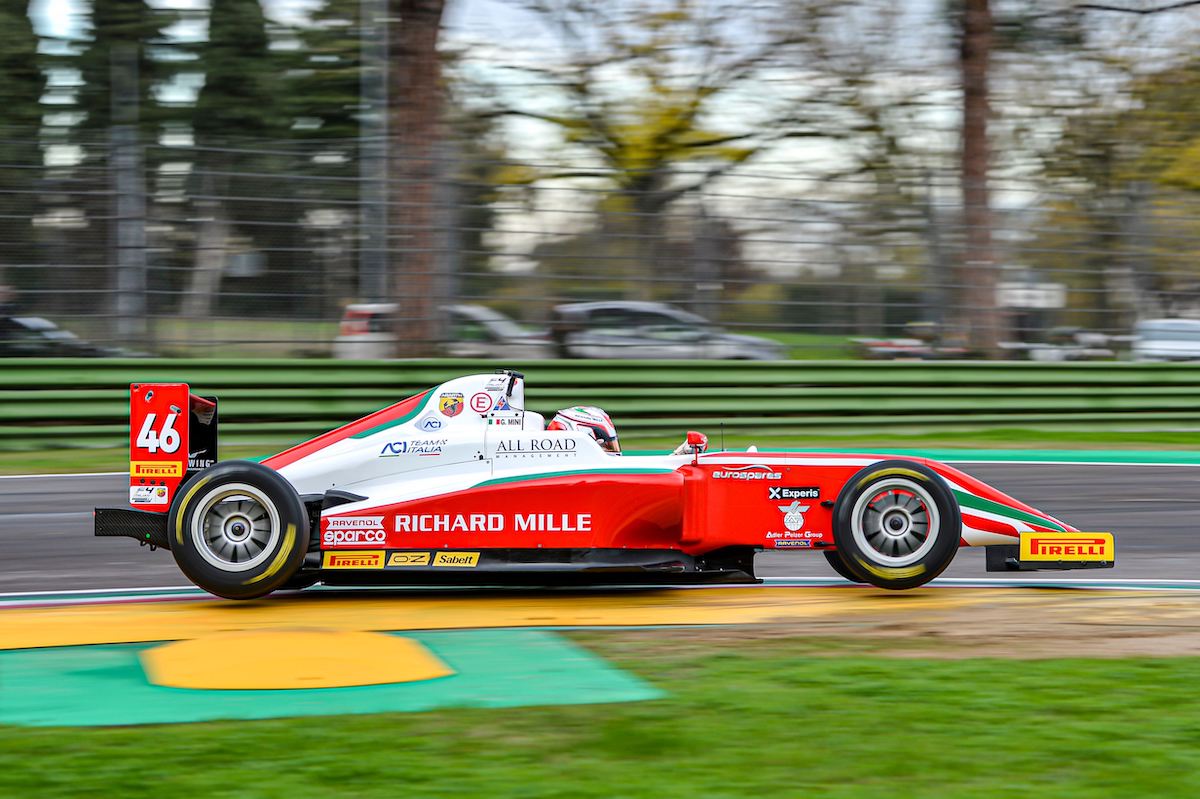 Gabriele Mini won the opening Italian Formula 4 race of the weekend at Imola as team-mate Dino Beganovic held off Jak Crawford to make it a Prema 1-2.

Crawford, who was fastest in qualifying but carried over a grid penalty from his last Italian appearance, took second from Beganovic off the line, but couldn’t shake the Ferrari junior.

Mini, Crawford, and Beganovic all broke away from the rest of the field, as a queue of cars formed behind fourth-placed Pietro Delli Guanti.

Before Beganovic could find a way back past Crawford, the safety car was brought out to neutralise the field. Gabriel Bortoleto and Sebastian Ogaard were both sent into the gravel after contact with Axel Gnos. Elsewhere, Nicolas Baptiste and Cenyu Han had a coming together, resulting in Baptiste being handed a drive through penalty.

Beganovic immediately pulled alongside Crawford on the restart. Van Amersfoort Racing-run Red Bull junior Crawford tried to defend but he couldn’t keep the Prema driver behind him.

The pair spent the rest of the race battling for position, allowing Mini to pull a small gap at the front of the field. He took the victory 0.642s ahead of the battle, claiming his fourth win of the season.

Crawford couldn’t find a way back past Beganovic and finished 0.4s behind.

Ollie Bearman took fourth after passing Delli Guanti on the restart. BVM Technorace’s Delli Guanti fell back into a battle with Jonny Edgar for fifth, though it was a few laps before Bearman was able to break away from the battle.

Delli Guanti eventually fell out of the top 10 and retired, while Iron Lynx racer Leonardo Fornaroli passed Edgar to join the battle for fourth. He pushed Bearman hard, but the US Racing driver held on to take fourth.

Edgar came home sixth ahead of the battling Prema duo of Sebastian Montoya and Kirill Smal.

Francesco Pizzi climbed to ninth after a difficult qualifying session, passing Joshua Duerksen in the closing stages of the race, but is now 59 points behind Mini, who could secure the title on Sunday.