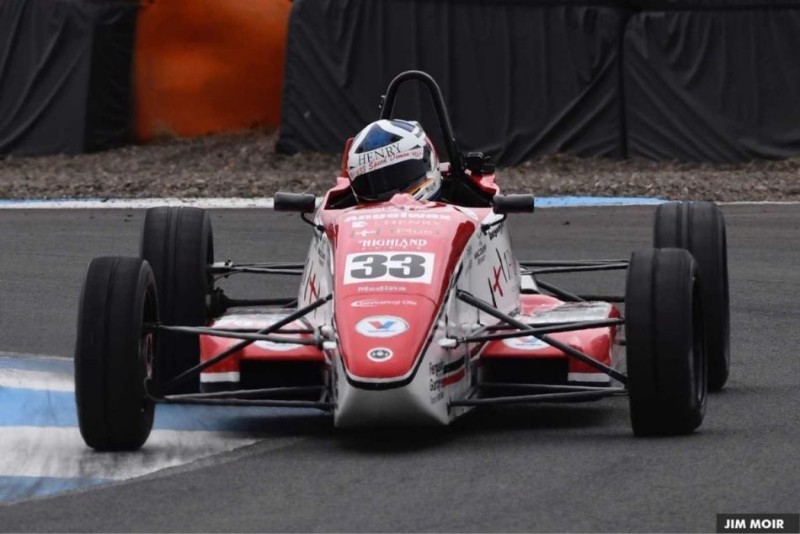 Jordan Gronkowski extended his Scottish Formula Ford lead with victory in the David Leslie Trophy at Knockhill, but he was challenged throughout by guest entry Matthew Cowley.

Gronkowski beat the Graham Brunton Racing driver in qualifying by a convincing margin, but in the races the 2017 F1600 Championship Series champion proved far tougher opposition.

It took less than two laps for Cowley to pass Gronkowski for the lead in the first race of the weekend, completing the move at the exit of Duffus. Gronkowski responded with fastest laps, and went side-by-side with Cowley twice.

The two remained together through the final corner of the final lap, with Cowley holding on to take GBR’s first win of 2019 by 0.106 seconds.

Cowley took a second win in race two, and this time the gap to Gronkowski was even closer at 0.074s. The Mancunian pulled away early before local driver Gronkowski started setting the pace and closing the gap. He initially attempted a move on the outside through Taylor?s Hairpin, but he couldn’t manage to cut back out onto the pit straight.

His next move involved moving to the inside of the hairpin and taking the lead before Cowley got onto the right-hand side of the straight and took back control. The two went side-by-side on two occasions before a frantic final lap which included Cowley sliding and losing momentum out of Clark?s corner.

Both were level into the final corners, but Cowley had the better traction approaching the finish line. Broome was third again, two places ahead of Chisholm, moving him up to second in the standings.

Gronkowski took his second DLT win in race three, with another tense battle with Cowley being decided when Cowley went through the McIntyre’s gravel defending the lead on the last lap.

Cowley suffered two lock-ups late in the race at Taylor?s Hairpin and defended through Hislop?s, and the pair went side-by-side through Clark?s with two laps remaining. After his error, Cowley was able to slipstream his way onto the back of Gronkowski.