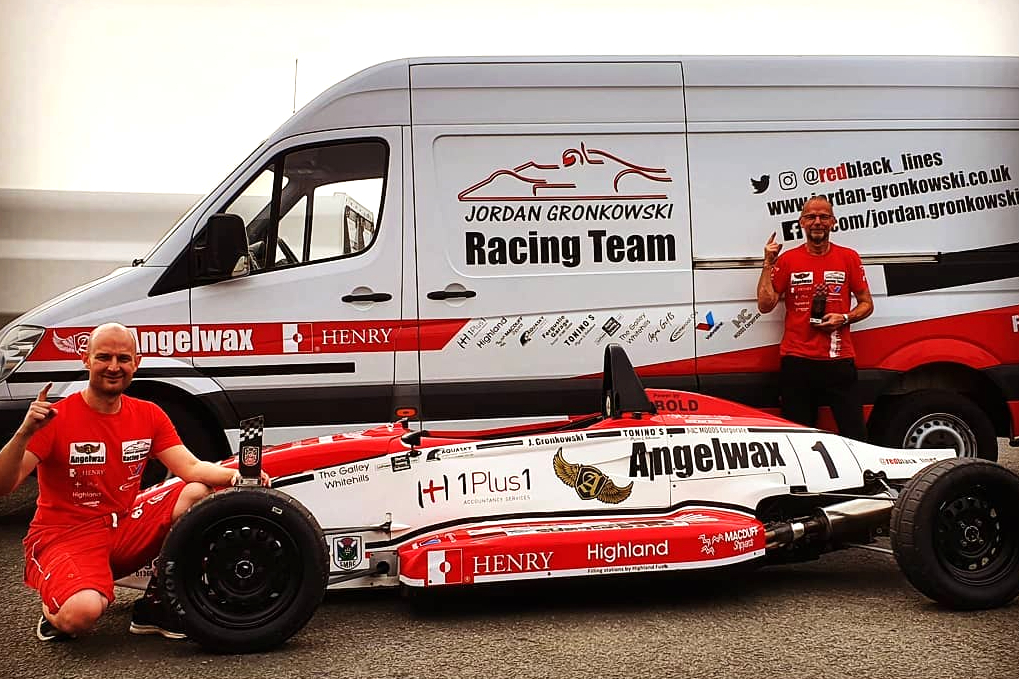 Maclennan, not racing full-time this year, drove an ex-Jamie Thorburn Ray GR18 and showed he had lost none of his speed by taking a close second to Gronkowski during a rain-affected opener.

He then got the jump on Gronkowski to win race two.

Qualifying had been delayed earlier after a major oil spill in one of the SMRC’s other championships and this delay coincided with the first of the afternoon’s rain showers.

Gronkowski emerged as the quickest, claiming pole with a time of 57.705s, edging Maclennan by a fraction over a quarter of a second.

He then translated pole into an early lead into Duffus Dip for the first time, and stayed in front for the duration of the12-lap opening bout, despite the persistence of Maclennan.

Behind, Michael Gray prevailed in a race-long fight for third with Neil Broome. Gray, in a Graham Brunton Racing-run Ray, held onto third at the start but slipped behind Broome at mid-distance after the StrongBroo Racing driver went around the outside at Duffus Dip.

The pair battled until the final lap when Gray slipped in between backmarker Glen Alcock and Broome on the run through Hislops towards the Hairpin to grab third.

Broome fought back but ran too deep under braking for the Hairpin. Gray therefore took the final podium spot; an achievement in itself given he was struggling with a misted visor.

“We came across Alcock on the final lap and Neil went to the left, Glenn stayed on the racing line and I went down the middle,” Gray said post-race.

Victory put Gronkowski on race two pole, but missing a gear at the initial launch allowed Maclennan to seize the advantage into Duffus Dip for the first time.

The pair briefly went side-by-side at Leslie’s but Maclennan maintained his lead and was never headed thereafter.

Gronkowski didn’t let the 2016 series champion get away though and kept the deficit under two seconds for the duration, with the pair trading fastest laps throughout. Gray again came home third behind.

Securing fifth in each race was the returning Matt Chisholm, who missed the previous round due to getting married.

Chisholm spent much of race one battling with Andrew Elliott in an entertaining scrap and had the measure of the championship rookie in race two as well.

GBR’s Lucy Grant came away from her first FF1600 race experience in the wet with a seventh and an eighth.

Derek Palmer Jr was another new to FF1600 racing in the wet and got caught out by race one’s condition, spinning out at McIntyres, and bagged seventh in race two.