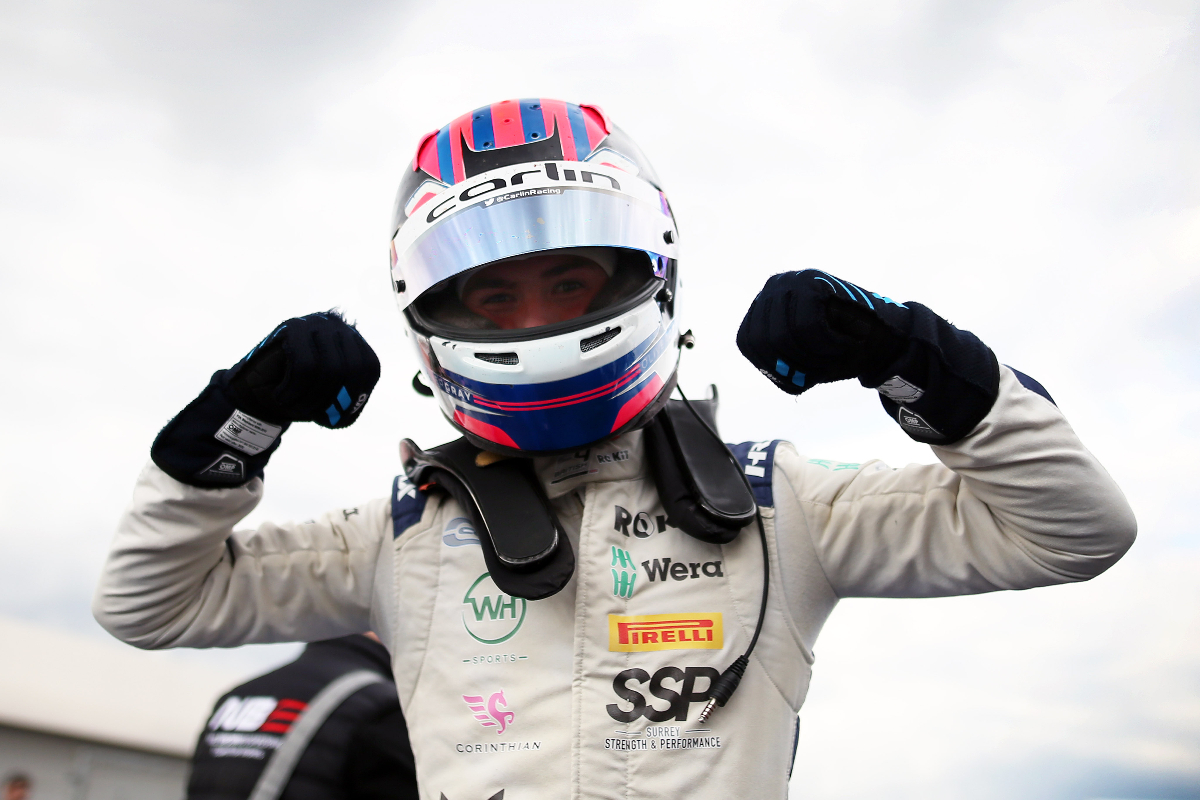 The British Formula 4 title fight will provisionally go to the final round as Ollie Gray won the final race at Silverstone National.

It was a truncated race, with a lengthy safety car early on and another in the closing stages of the race.

During what green flag racing there was, Joseph Loake tried to challenge poleman Gray for the race lead, but Gray held onto the position.

It was a staller on the grid that prompted the first safety car. Carlin’s Louis Sharp wasn’t able to get going, and was collected by Virtuosi Racing’s Edward Pearson. Both drivers were able to walk away from the incident, but the safety car was brought out to clear Pearson’s stranded car.

After the incident was cleared there was a bizarre restart. Gray had accelerated away on the pit straight, only to have to slow again to the safety car ‘sspeed by the end of the straight as the safety car returned to track. During the first safety car period, Georgi Dimitrov had run off and his car was still being recovered when the first restart took place.

The race was well over halfway through by the time the green flag waved again.

Loake, who had challenged Gray off the line, couldn’t find a way past him the leader on the restart. He held position, keeping championship leader Alex Dunne behind, while Gray tried to pull away at the front.

Racing was once again halted in the closing stages of the race when weekend debutants Isaac Barashi and Jaden Parat had slight contact. Barashi was sent spinning into the gravel, but Daniel Mavlyutov behind had the worse outcome as ran wide to avoid the two ahead and hit the barriers.

The safety car was initially brought out before the race was red-flagged, sealing Gray the win and keeping him in title contention pending the result of a penalty appeal. If Gray loses his appeal, Dunne is crowned with three races to spare.

Further back, Aiden Neate took fourth ahead of Eduardo Coseteng, who passed Ugo Ugochukwu early on.

Ugochukwu spent most of the racing laps in a three-car rookie battle for sixth. Daniel Guinchard kept the pressure on Ugochukwu, with Oliver Stewart joining the fight. Ugochukwu managed to hold off Guinchard to top the rookie classification.

Behind the rookie trio was Marcos Flack and Adam Fitzgerald.