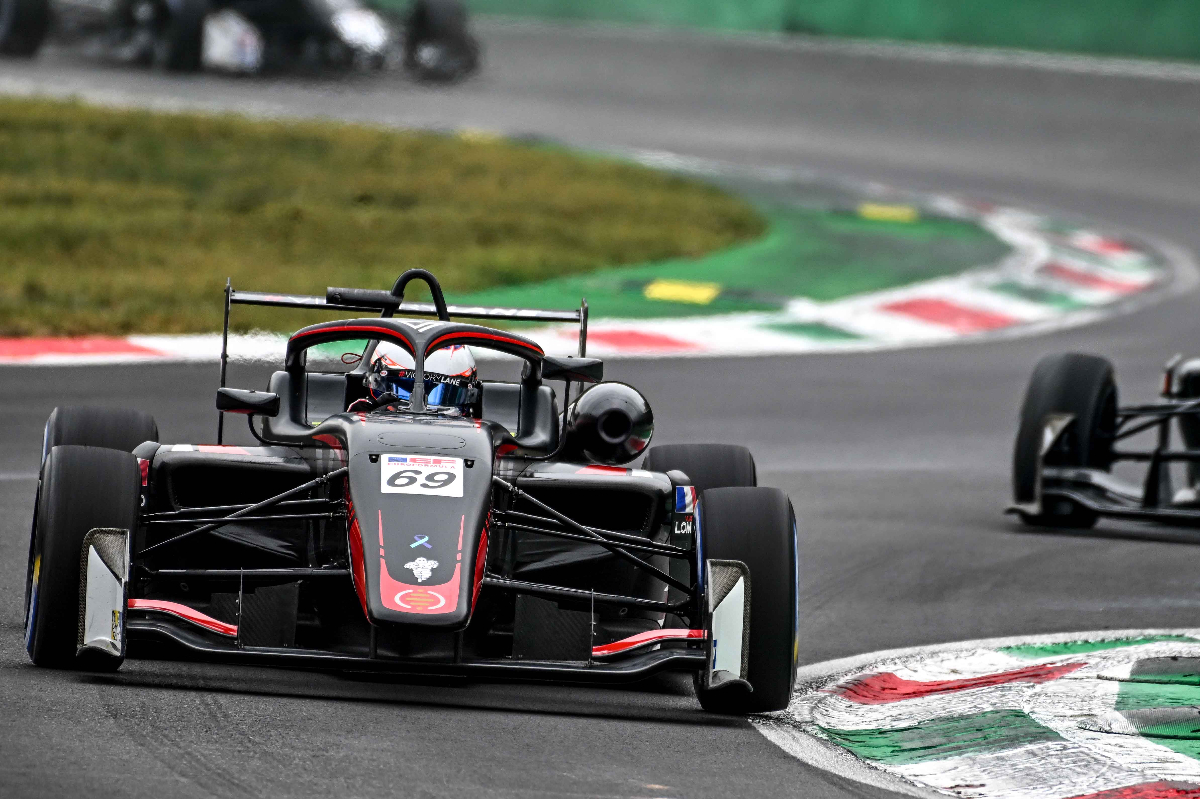 The Euroformula title fight will be disputed in the final round at Barcelona after Vlad Lomko won race three at Monza.

Oliver Goethe had been running away with this year’s championship, but three sixth places (compounded by brake issues meaning he had to start race two of the weekend a lap down) at Monza while Lomko has won twice has trimmed his lead to 63 points and with 84 points available over the remaining three races.

Josh Mason and Frederick Lubin filled the front row on the reversed grid for race three, with Goethe and Christian Mansell in third and fourth.

However Mansell, whose car had to be rebuilt after a roll in race two, did not line up in his grid spot as he was wheeled to his garage and Motopark (who also run the CryptoTower Racing Team squad that Mansell drives for) began work on the gearbox and the surrounding areas at the rear of his car. The work was completed in time for Mansell to join the field half a minute into the race.

Goethe moved into second place within seconds of the race starting, taking the outside line into turn one and passing Lubin despite the latter locking up and going super tight on the entry to the corner.

Lubin briefly reclaimed position on lap two but then cut the first chicane and so allowed Goethe back past through Curva Grande. Unintentionally he also let Vlad Lomko through, and on the next lap he passed Goethe for second as Alex Garcia and Francesco Simonazzi squabbled behind.

Lomko took the lead from Mason at turn one on lap four, and later in the lap Lubin passed Goethe for third as the top four ran together.

Mason returned to first place by going around the outside of Lomko at the della Roggia chicane on lap six of 17, and at the same place on the next lap Goether got back ahead of Lubin. There was an immediate response from Lubin, who edged down the inside of Goethe at the second Lesmo in a brave move.

The lead changed hands again to Lomko on lap nine in the same way it had on lap four, then several corners of wheel-to-wheel action a lap later between Goethe and Simonazzi was settled in the latter’s favour by going around the outside of Lesmo 2.

The top had broken away, but Lubin set fastest lap and was just 0.272 seconds back as Mason passed Lomko again. The pair traded places twice on lap 12, leaving Mason having to hold off Lubin on lap 13.

He could not get a move done, and ultimately that was decide the battle at the front, but there was more drama behind. Simonazzi ran wide through Parabolica on lap 14, leaving him susceptible to Goethe down the pit straight. The points leader passed him for fourth going into the first chicane, but as they exited it he was nerfed around by Simonazzi due to their speed difference.

Simonazzi finished 9.2s down on the winner in fourth, while Goethe was 52.9s back in sixth. However, Simonazzi was handed a three-position penalty for the incident after the race, which put him last of the classified cars. Garcia inherited fourth, with Goethe fifth and Effective Racing’s Vladimir Netusil in sixth place.

Mansell returned immediately to the pits after joining the race, and works restarted on his car. He got out and went into the garage, but eventually returned to the cockpit to do four more laps before pitting as the chequered flag was waved. He was listed as non-classified in the final results as he didn’t complete the 75% of the laps completed by the winner required .