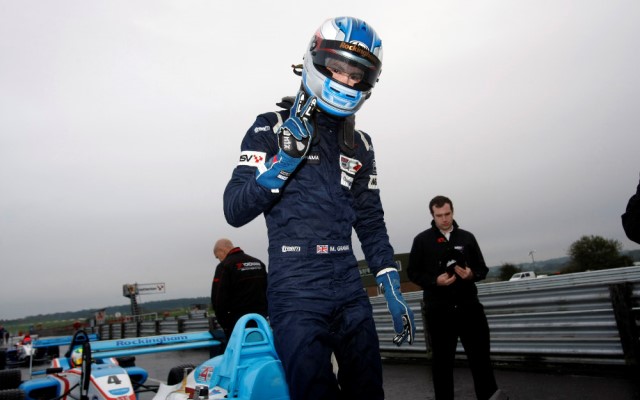 As in race one, he struggled to get away from pole position on the slippery surface with single-seater debutant Will Palmer initially edging ahead before Falco Wauer moved into the lead.

Wauer got caught out by the conditions on lap two however, allowing Sennan Fielding to take over in first place. The HHC driver could only hang on until lap four though, when Graham overhauled him for the lead.

Graham pulled away over the remaining five laps, winning with an 11 second margin.

“It was really difficult to get off the line again with so much rubber down from previous races,” said the Douglas Motorsport driver.

“I don’t know where I was by the third or fourth corner and it was incredibly hard to see behind the other cars. But again I pulled off a few overtakes and got myself back to the front. It was fabulous at the front, it was so clear! This track hasn’t always been my favourite but so far this weekend it couldn’t be any better.”

Fielding took a lonely second place with Pietro Fittipaldi completing the podium, fending off Jake Cook until the Hillspeed driver went off and fell to sixth. Palmer claimed his second fourth place of the day after running wide on the opening lap and dropping towards the back, while Wauer was fifth after several further off-track moments.

Dimitris Papanastasiou and Fredrik Johansen completed the top eight, while Matteo Ferrer retired on lap one.