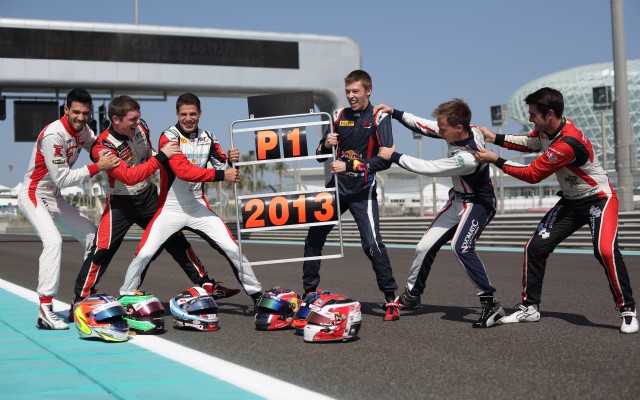 Six drivers enter this weekend’s GP3 season finale in Abu Dhabi with a chance of winning the title, with Daniil Kvyat looking to end his time in junior single-seaters by beating Facu Regalia to the title.

Neither driver would have been predicted as being a title contender coming into the campaign. Regalia had failed to raise many eyebrows up to now in his career but he quickly made a mark in his first full GP3 season, making the podium in Valencia and at Silverstone before winning from pole at the Nurburgring. A double podium at Spa saw him take the championship lead, and a third and a fourth in Monza gave him a seven point advantage over the break.

Regalia’s campaign has been built upon impressively consistent strong results, having finished all but two races since Valencia inside the top six and six of those ten races on the podium. But consistency alone might not be enough given the form that Kvyat arrives in Abu Dhabi with.

The Formula Renault 2.0 graduate also played the consistency card early on, claiming three fourths and a fifth across the Valencia and Silverstone rounds. A mechanical issue caused a double non-score at the Nurburgring, but a maiden podium in Hungary was followed by wins in Spa and Monza that brought him right into title contention.

Another win on Saturday in Abu Dhabi would eliminate the points gap to Regalia. A lot has happened for the young Russian since Monza, so this weekend will provide a great test of his focus and ability under pressure, neither of which have been shown to be a weakness before.

Of the other contenders, Kevin Korjus is best-placed despite not having won a race yet. He’s another to have benefited from achieving some consistency amongst a competitive field with the new Koiranen team, but he will need more than that to close the 31 point gap to Regalia.

Three further points back is Conor Daly, who looked well-placed behind Regalia after a brace of second-places at Spa, but his chances were derailed in the first corner pile-up at Monza. The third-year showed in Valencia he’s capable of leading from the front, and will need to do that here to have a real chance.

A double retirement in Spa reduced Jack Harvey‘s chances, but last year’s British F3 champion kept himself in contention with a second win of the year in the Monza sprint, adding to his Silverstone success. With a 42 point gap to team-mate Regalia, he needs a big slice of luck to be a title challenger.

The same goes for Tio Ellinas, one further point behind. He was the pre-season favourite and backed that up early on, leading the championship as the only driver to score in all of the first eight races. A double non-score as he lacked pace in Hungary wasn’t great, but his title hopes were derailed by some unfairly rotten luck at Spa and Monza, twice being taken out in first corner accidents. 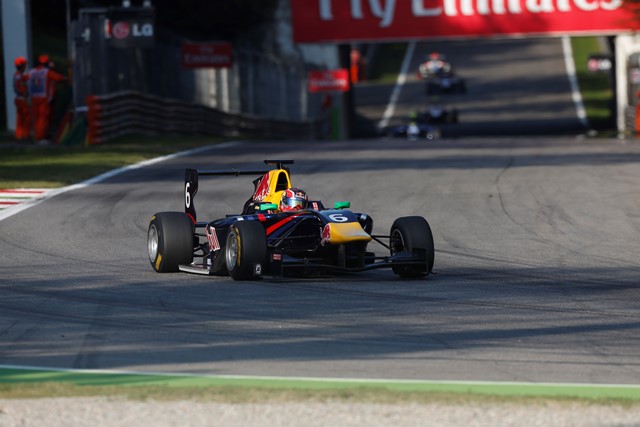