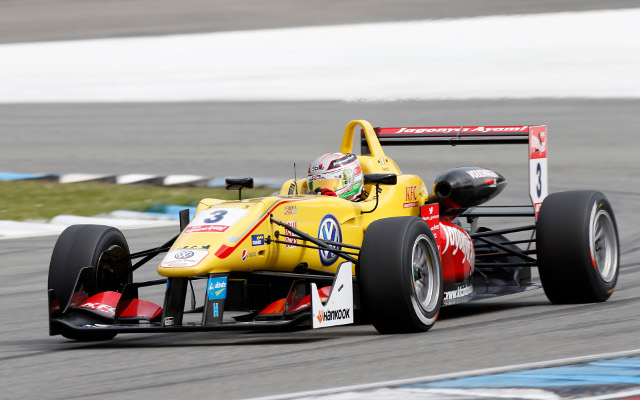 Antonio Giovinazzi has won the second FIA Formula 3 European Championship race at the Hockenheim season finale to secure?himself the runner-up position in the drivers championship.

Giovinazzi held off tough competition from both Felix Rosenqvist and Jake Dennis in the safety car-affected race that eventually went to the time limit.

Dennis got a much better start than the Italian from second on the grid, diving down the inside of him into turn one, but Giovinazzi was able to hold position by running wide into the run-off area on the outside.

Dennis wasn?t finished however, as he made two more attempts to pass Giovinazzi on the first lap alone; once into the hairpin, and then again into the Mercedes corner, but the Brit wasn?t able to get by.

Coming into lap two, Alexander Albon dipped a wheel in the grass on the outside of turn one and spun into the wall at high speed, bringing out the safety car.

When the race resumed, Giovinazzi was able to rocket off ahead of Dennis, only for another safety car to be deployed thanks to a crash involving Nabil Jeffri and Tatiana Calderon at the hairpin.

The second restart was much closer between Giovinazzi and Dennis, but not close enough for the Brit to make a real challenge. Rosenqvist then surprised Dennis into the hairpin on the restart and took second position.

The Swede went after Giovinazzi, but when it became obvious that Rosenqvist could not get past, he gave the position back to Dennis as the Brit is still in the hunt for third in the championship.

Further back, Alexander Sims tried to make a move past?Maximilian Gunther for fourth?but went wide into the gravel at turn 11, allowing?Mikkel Jensen?to get past him.

Gunther took fourth, with Sims, Jensen and race 1 winner?Lance Stroll not far behind.

A multiple lap scrap between Sergio Sette Camara and George Russell took place in the middle of the race, with the Brazillian eventually winning that battle for eighth position.

Markus Pommer rounded out the top 10 while Charles Leclerc could only manage 11th, and drops to fourth in the championship behind Dennis with one race to go.

UPDATE: Sims has been excluded from fifth place after scrutineering found that additional air was able to enter his engine through a hole. HitechGP boss David Hayle explained this was a result of stones thrown up in Albon’s off.