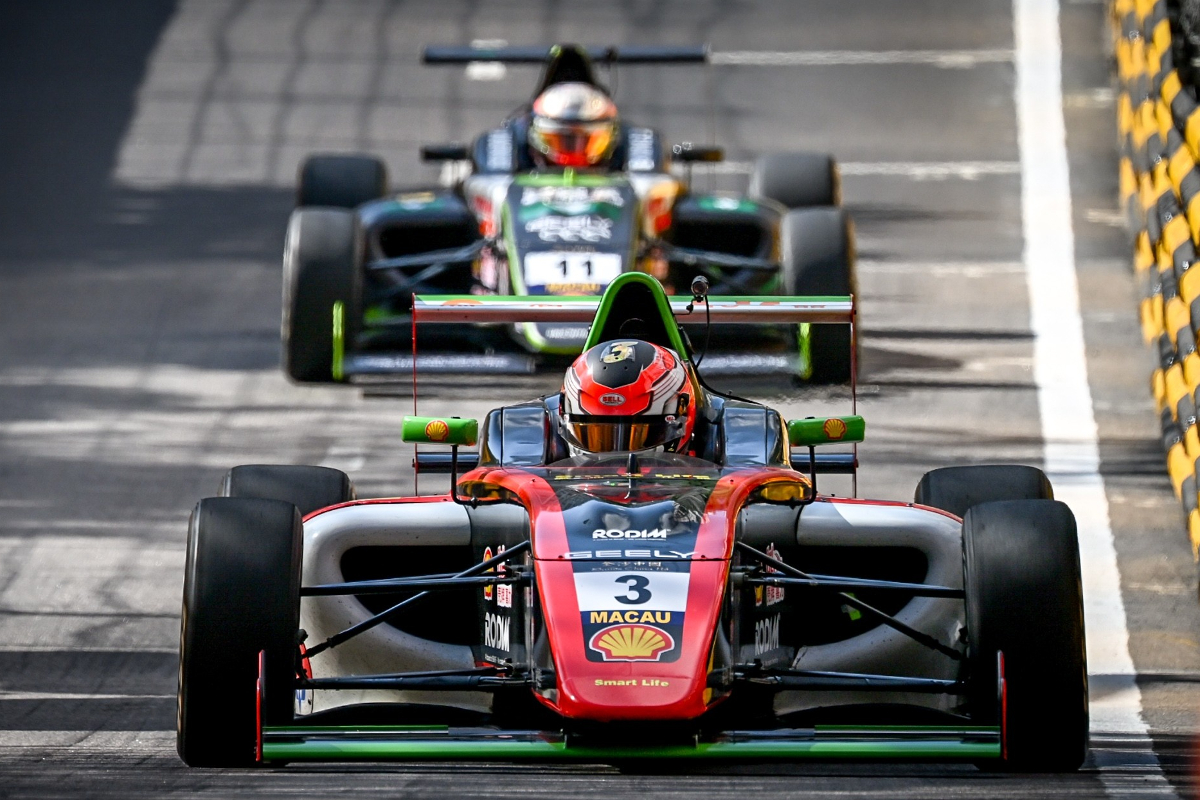 Andy Chang started on pole, with Xie alongside and Leong in third. The double slipstream enabled Leong to pass Xie and then get on the inside of Chang through Mandarin to move into the lead.

Xie also managed to get by Chang before Lisboa, where Sicheng Li had the inside line to pass Chang too after the latter failed to reclaim second place.

It left Chang on the outside with no way to turn into the corner and he fell to the back by going down the escape road.

Leong, who won the Macau GP in 2020 and ’21 and like Chang is a guest entrant this weekend due to being a Chinese F4 champion, immediately created a gap up front but had his lead eradicated when Yaoming Huang crashed at Fisherman’s Bend and the safety was brought out on lap two.

Racing resumed on lap five and Leong weaved as much as he could to break the tow to Xie. He managed to hold on, strongly defending the inside line once they exited Mandarin.

There was just half a second between them at the end of the restart lap, while Chang had recovered from 10th to fifth. This time Leong’s weaving was not as effective, with Xie sweeping past on the run to Lisboa.

Xie did not look immediately secure in the lead, with a mistake at the Melco hairpin almost costing him first place, and Chang was getting ever closer as he passed Royce Yu for fourth on lap six.

A gap of 0.372 seconds existed between the top two going into the penultimate lap, and Leong was right on Xie’s gearbox entering Mandarin. The inside line was defended as they exited it, and Leong did not have enough momentum to attempt a move around the outside at Lisboa.

It was the same on the last lap, with Leong thinking of a pass on the outside but Xie braking late enough to stay ahead. Chang meanwhile did pass at Lisboa, taking third place. In the final few kilometres Xie stretched out a two-second lead, with Chang just 0.861s off second place at the finish and with third place on the grid for Sunday’s main race.