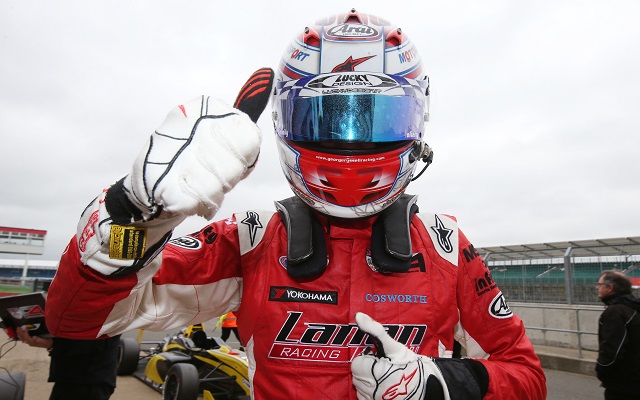 BRDC F4 points leader George Russell took his third victory of the season in the final race of the second round at Brands Hatch.

The Lanan Racing driver kept Sennan Fieding at bay in the second half of the race, leading the HHC at the checkered flag by less than half a second.

Russell started the race from third on the grid, but ended up shuffled down to fifth over the opening lap.

On lap two, as front row starters Raoul Hyman and Arjun Maini fought for the lead of the race out front, there was trouble behind as Struan Moore ended up in the barriers when trying to overtake Will Palmer for third.

The championship leader assumed third and, just a lap later, made the most of the battle between Hyman and Maini to steal the race lead.

Russell set out to disappear into the distance, but was not allowed to cruise in first as Fielding cleared Hyman and then Maini, slotting into second and beginning to gain on the race leader.

The HHC man managed to make up around a tenth or two per lap in the second half of the race, but ran out of distance before he could mount a proper challenge, finishing second to Russell.

Hyman managed to find his way through Maini to take the final podium spot, while the Indian held off Chris Middlehurst for fourth.

Jordan Albert recorded his best finish in the series yet in sixth, leading teammate Diego Borrelli.

Palmer settled for eighth as Gaetano Di Mauro and Charlie Eastwood rounded out the top ten.