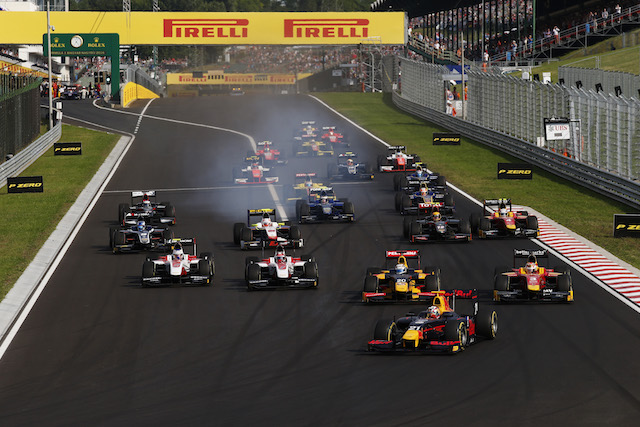 Pierre Gasly made it two GP2 feature race wins out of two since ending his long win drought with a controlled performance at the Hungaroring.

The Red Bull Junior held the lead from pole position at the start, as Prema team-mate Antonio Giovinazzi moved up to second past a slow-launching Sergey Sirotkin.

Gasly quickly built a margin of between two and three seconds over Giovinazzi, and he effectively?maintained that for most?of the race, with most of the frontrunners using a soft-hard tyre strategy.

Gasly’s?final winning margin was 1.3 seconds, as he moves into the championship lead.

Giovinazzi gave Prema its third one-two finish of its maiden GP2 campaign, and its second such feature race result in a row.

The Italian had to soak up long pressure from Sirotkin, whose poor start dropped him to fourth before passing?Norman Nato at Turn 3 after the pit stops.

Raffaele Marciello was seventh in the early laps but had strong pace on the hard tyre before stopping later on, rejoining in fourth.

Arthur Pic had by far his best drive of 2016 so far ?- at the scene of his sole GP2 victory two years ago – took take fifth, ahead of?Nobuharu Matsushita and Nato.

From 20th on the 22-car grid,?Jimmy Eriksson drove an attacking race and stayed out longer than anyone else that started on the hard tyre. This put the Swede in eighth and poised to start the sprint race from pole before he crawled to a halt on the final lap, pulling off at the penultimate turn.