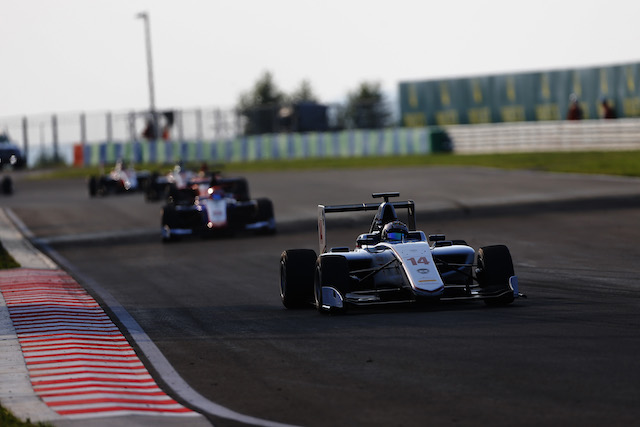 Matt Parry?drove to his first GP3 victory in the opening Hungaroring race after pole-sitter?Nyck de Vries failed to get away from the grid for the formation lap.

With the Dutch driver instead forced to start from the pits, Parry started at the head of the grid, but made a poor initial launch compared to?Antonio Fuoco.

Parry had the inside line though and braked late to ensure he kept ahead. The Briton then quickly opened up a two-second lead that he held for most of the race, pulling it out to 3.2s by the end.

Fuoco claimed his fifth podium of the year and fourth in a row, while Jake Dennis took his first in third position, a second behind the Italian.

Nirei Fukuzumi?achieved his best result since the Barcelona opener in fourth.

In a rather?processional race,?Ralph Boschung was one driver on the move from 10th on the grid, pulling off?an impressive overtake on the championship leader?Charles Leclerc around the outside of Turn 4 for fifth.

Leclerc finished one place ahead of his closest title rival?Alex Albon, while?Arjun Maini secured the reverse-grid pole for the second time in as many weekends in the series.

For the second time this season?Jack Aiken had to make do with ninth, with?Kevin Jorg taking his first point since Barcelona in 10th.

De Vries finished 20th, making an aggressive move on compatriot?Steijn Schothorst at Turn 1 in the process.