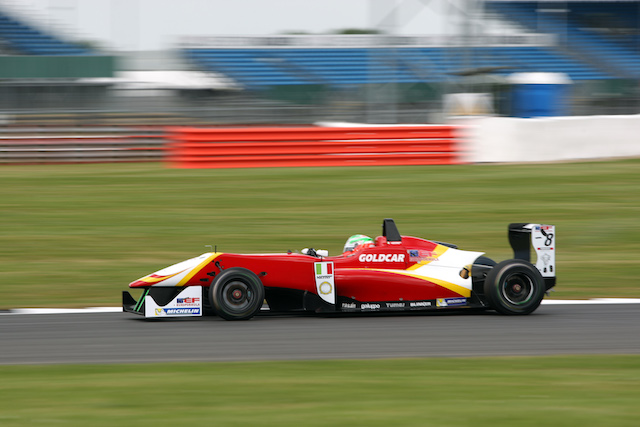 Leonardo Pulcini extended his Euroformula Open championship lead with his fourth win of the year in race one at Silverstone.

The Italian driver from Campos Racing only claimed pole by 0.086 seconds over Carlin’s?Colton Herta, but opened up a gap of nearly five seconds over the American during the race.

Second was still Herta’s maiden podium in the category, on a circuit he’s familiar with but has?only raced on less than half of before.

Antoni Ptak also scored his first visit to the rostrum after getting ahead of his team-mate?Damiano Fioravanti.

Ferdinand Habsburg took fourth, recovering the places lost to?a four-place grid penalty handed to him because he’s already raced at Silverstone this year. Performing an identical trick was home racer?Enaam Ahmed, up from 10th on the grid to sixth behind Fioravanti.

Both benefited from a?clash exiting Copse for the first time between?Ameya Vaidyanathan and?Tanart Sathienthirakul that resulted in the former being spun into the barriers. The Indian is returning to action this weekend for the first time since the?Oulton Park BRDC British F3 event, when he was also innocently hit, that?time into a huge roll.