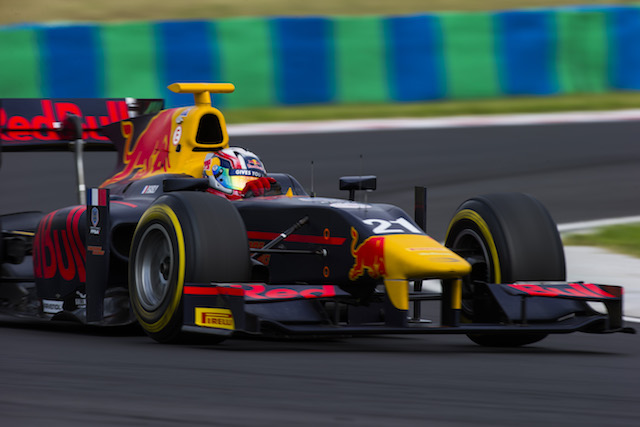 Pierre Gasly followed up the ending?of his win drought at Silverstone two weeks ago with a dominant GP2 pole at the Hungaroring.

The Red Bull Junior sat out the first part of the session and then went over six tenths clear of the field in the mid-part.

He found another six hundredths of a second on his later run, and had a final lap that was only one tenth down – while the closest any of his rivals could get was 0.57s behind.

Giovinazzi was narrowly up on Gasly’s pole time on his final effort, but was forced to abort after catching a gaggle?of slow cars on track.

Alex Lynn appeared to have improved form after his Silverstone struggles, joining his the other?expected pre-season favourites Gasly and Sirotkin in the top three in practice, but an attempt to repeat his 2015 pole by taking his second run in the middle of the session was thwarted by a large moment of oversteer.

He later had his?best time (from the first run) deleted after he had already parked in the pits, leaving him 11th on the grid.

That was still better than Oliver Rowland, who had started every previous feature race this season inside the top 10 prior to taking the championship lead last time out at Silverstone. This time he could only manage 17th, just 0.03s ahead of his MP team-mate?Daniel De Jong.