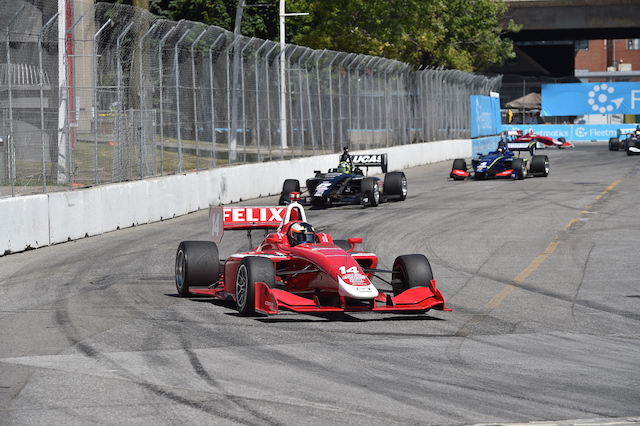 Felix Rosenqvist?led all 80?laps of the two Indy Lights races in Toronto on?his return to the series.

The Swedish rookie’s prowess on street circuits, that was demonstrated in his time in Formula 3 at tracks like Macau and Pau, came to the fore as he took two very comfortable victories in the two races at Toronto.

It was his first time back in an Indy Lights car since missing the rounds at Road America and Iowa Speedway due to other commitments with Mercedes.

The race one podium was completed by Carlin driver?Felix Serralles?in second, and?Juncos Racing’s?Kyle Kaiser in third after passing?Zach Veach for the final podium spot – while Veach came undone and crashed on the last lap in the exchange

Santiago Urrutia was fourth in the first race, with?Dean Stoneman?fifth despite being involved in a crash that took out?Juan Piedrahita and?Zachary Claman DeMelo.

In race two, Schmidt Peterson Motorsports driver?Andre Negrao took his second Indy Lights podium with a second place finish behind the still-dominant Rosenqvist, and Kaiser took another third place for his efforts.

Urrutia took another fourth place in race two, ahead of Jones in fifth, Veach recovering from yesterday’s late-race drama to finish sixth, and Grist picking up another solid finish at home in seventh.

Neil Alberico rebounded from a crash in race one to finish eighth, ahead of Blackstock in ninth, and Serralles in tenth – who fell down the order after overshooting a corner early in the race.

The second race saw a dramatic moment in the championship as Stoneman’s car failed to take the start of the race due to mechanical issues. He lost 34?laps in repairs, and fell several places in the championship standings from second. He wasn’t the only casualty – Piedrahita and DeMelo each suffered from recurring mechanical issues and retired, and Kellett crashed out with two laps remaining.