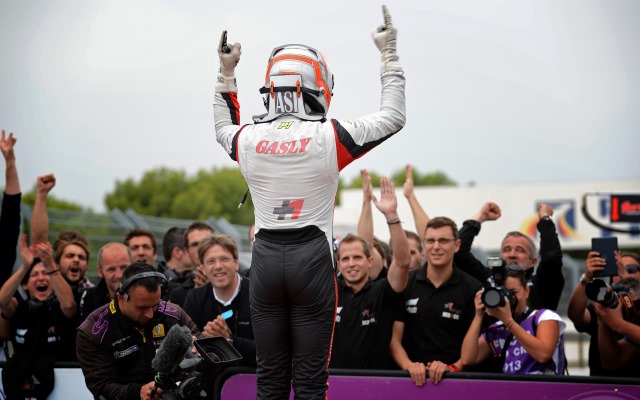 Pierre Gasly took the lead of the Eurocup Formula Renault 2.0 championship with a lights to flag drive in race one at Paul Ricard.

Championship rival Oliver Rowland, who started tenth on the grid, managed to finish sixth but surrendered his advantage in the title race as Gasly took the flag after holding off Luca Ghiotto.

Gasly did not pull away from pole too cleanly yet maintained his lead under pressure from Ghiotto of Prema.

Meanwhile Rowland had started with great intent from the fifth row as a safety car was deployed due to the an incident involving Columbian Oscar Tunjo.

At the restart, Gasly continued to take charge, while Ignazio D?Agosto in fourth place attempted to pressure Nyck de Vries but Jake Dennis managed to capitalise and pass the Italian.

There was little more movement in the top ten as Rowland, up to sixth, held off advances of Egor Orudzhev.

Ghiotto would not let Gasly clear away out front but was unable to pass the Frenchman as the front three came home unchanged. Dennis? pass on D?Agosto earned him fourth place with Rowland finishing sixth ahead of Orudzhev who slipped from fifth on the gird.

But it was a successful race for Gasly who, with three rounds left, takes control of the championship with a 16 point lead over Rowland.

Picariello eases to race one victory at Hockenheim