Gasly and Ocon lead Eurocup practice at the Hungaroring 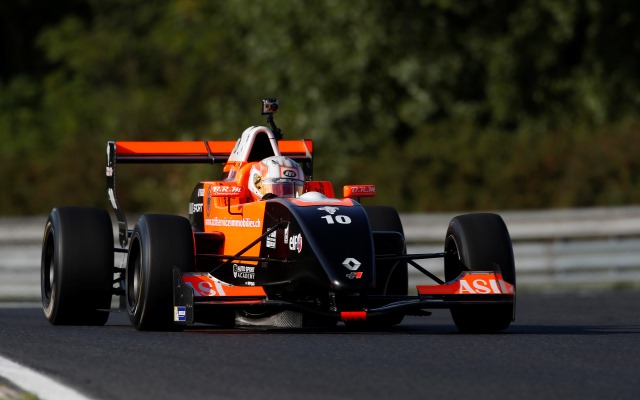 French duo Pierre Gasly and Esteban Ocon topped the timesheets in the two Eurocup Formula Renault 2.0 practice sessions at the Hungaroring on Friday.

Ocon finished on top in the opening session with a lap of 1m43.241s. Gasly was 0.056s slower in second place, while Ed Jones maintained the strong form that took him to two podiums last time out in Spielberg with the third best time.

Steijn Schothorst was fourth ahead of Jake Dennis and Andrea Pizzitola. Oliver Rowland, who holds a 17 point lead over Gasly at the head of the standings, was seventh with the top ten completed by Mikko Pakari, Ignazio D’Agosto and Alex Albon.

Gasly lowered the benchmark to 1m42.301s in the afternoon, 0.016s faster than the time that Ocon managed in the same session.

“We?ve got some good foundations to build on now,” said Tech 1 driver Gasly. “We can make a few improvements and get the car to perform even better. I?ve found my bearings here again and I?ve had a good day. The performance is there, I just need to avoid making mistakes. It?s up to me to keep this going.”

Lotus and ART Junior ace Ocon said: “It was a pretty productive session overall. We set up the car a little differently to the Red Bull Ring and it all felt pretty good, though we?ll need to have a look at how it handles with new tyres and how much rubber they leave on the track. If we?re going to come back and fight for the top positions, we need to find some speed.”

Rowland was third with Jones making a strong showing again in fourth. Dennis – who sits third in the standings despite failing to score a podium so far this season – was fifth again ahead of Josef Kaufmann Racing pair Oscar Tunjo and Schothorst. Pizzitola, Bruno Bonifacio and Aurelien Panis rounded out the top ten.