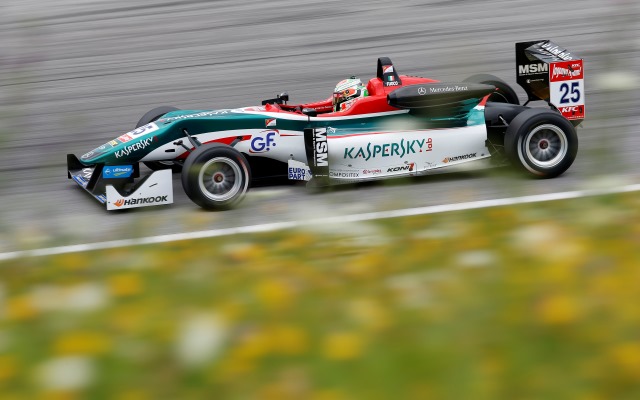 Antonio Fuoco scored his first FIA F3 European Championship win since the opening round at Silverstone as he inherited victory in race two at Spielberg after fellow Italian Antonio Giovinazzi was penalised.

Giovinazzi led the race from pole position through three safety car periods. He appeared to have made a third strong restart with five minutes left on the clock, but he was then handed a drive-through penalty for an infringement of the safety car rules. He stayed on track and took the chequered flag, so this was converted into a 20-second time penalty that dropped him to 16th.

After starting fourth, Fuoco made a good start off the line and then claimed P2 away from Tom Blomqvist at Remus. He was unable to stay with his compatriot Giovinazzi at each restart, but that didn’t matter in the end.

Blomqvist followed up his race one win with a second place, while Lucas Auer was perhaps fortunate to score a home podium after falling from third to sixth on the opening lap.

In addition to the Giovinazzi penalty, Auer’s case was helped by a collision between his Mucke Motorsport team-mate Felix Rosenqvist and championship Esteban Ocon at turn one at the second of the safety car restarts.

After starting an unusually low sixth, Ocon had done well to clear the two Mucke cars early on and get up to fourth but he came under attack from Rosenqvist as they crossed the line at the second restart. Ocon initially moved to the inside to defend but then went to the outside to take the racing line for the corner.

However, Rosenqvist was already half-alongside, so contact was made and for the second race in a row, Ocon found himself heading backwards through the turn one run-off. The Frenchman retired to the pits, and Rosenqvist didn’t even make it that far.

After getting past Max Verstappen when the Dutch rookie ran wide at the final corner, Jake Dennis had been poised to take fourth until his car slowed on the penultimate lap.

The first safety car was triggered when Jordan King, having followed team-mate Dennis past Verstappen, clobbered the inside kerb at Remus while being re-passed by Verstappen, damaging his car.

The second was to retrieve the car of Dennis van de Laar, who spun off at turn one while fighting with Gelael, and the third was needed when Spike Goddard lost control after contact with Roy Nissany, sending the Australian clattering into Sandro Zeller at Remus.