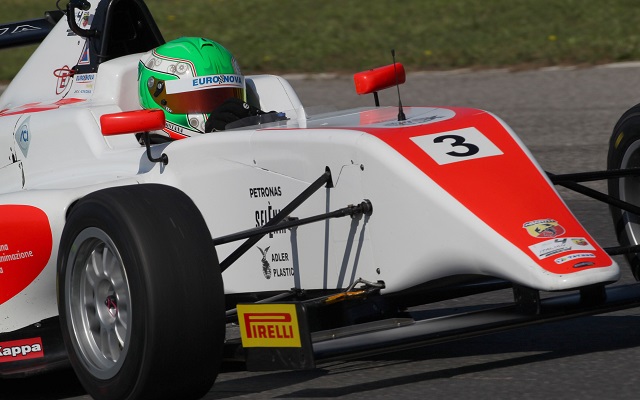 Euronova Racing driver Andrea Fontana picked up his first career victory in the Italian F4 championship in race two of the Magione round.

After recovering to tenth place in a difficult opening race of the weekend, Fontana controlled the 20-minute sprint from reverse-grid pole, leading every lap along the way.

The young Italian made a good start to lead the field into turn one, with series debutant Matteo Desideri holding second. Behind him, Bar Baruch, Andrea Russo and Joao Vieira went into turn one three-wide, which resulted in contact between the two latter drivers and sent the Brazilian into the gravel.

A train of cars formed behind Desideri during the opening laps, which allowed Fontana to build up an early advantage.

However, his lead was soon nullified when an incident between race one winner Lance Stroll and his teammate Brandon Maisano brought out the safety car.

Stroll, stuck behind Maisano in the train of cars following the driver in second, attempted an optimistic move on the Frenchman, diving down the inside into the esses. Both Prema drivers then went wide before making contact, which bounced the Canadian into the air and put Maisano in the gravel.

When the safety car period for removing Stroll’s stricken car was finally over, Fontana nailed the restart, while Russo managed a superb pass on Desideri into turn one for second.

However, the Diegi driver could not keep up with Fontana, who stormed away to his maiden victory, eventually crossing the line s clear of his opponents.

With Russo taking second at the flag, Desideri quietly kept up in third, picking up a maiden podium on his first weekend in the series.

Mattia Drudi managed a late overtake on Baruch to take fourth, while the Israeli fended off Takashi Kasai for fifth.

The Japanese driver previously overtook Leonardo Pulcini, who had to settle for seventh ahead of Lucas Mauron.

Ivan Matveev fought his way up fron 19th on the grid to take ninth, while Nico Rindlisbacher rounded out the top ten.