Fuoco, Pizzitola and Parry among GP3 testers in Abu Dhabi 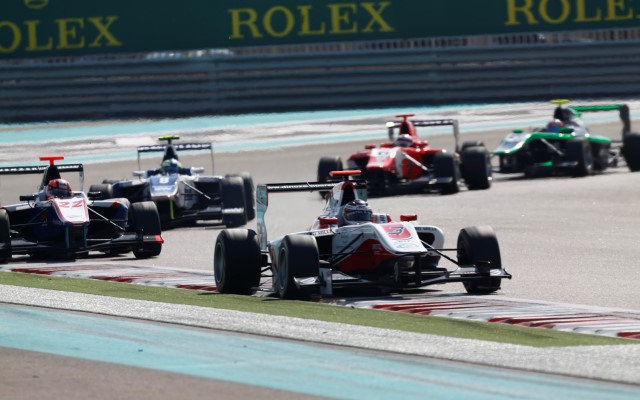 The entry list for the opening day of the GP3 post-season test in Abu Dhabi has been unveiled, with numerous F3 and FR2.0 drivers among those taking part.

Ferrari protege Antonio Fuoco is perhaps the biggest name in action. The Italian, who finished fifth in the European F3 standings this year, will test for Koiranen on the first day, and is known to be running with Carlin and ART on the following two days.

Joining him at Koiranen on Thursday are FR2.0 veteran Steijn Schothorst as well as Ryan Cullen, who has competed in GP3 for the past two seasons, mostly for Marussia Manor before competing with Trident in Abu Dhabi last weekend.

Another F3 racer Tatiana Calderon will test for ART alongside Andrea Pizzitola, fourth in Eurocup FR2.0 this year, and Artur Janosz, third in Euroformula Open.

Patrick Kujala is one of the highest-placed 2014 GP3 racers taking part, lining up for Arden alongside Mitch Gilbert?– who contested five rounds for Trident – and George Russell, who will be completing his prize test for winning the BRDC F4 title.

Also returning will be Kevin Ceccon and Matheo Tuscher, sharing one of Jenzer’s cars for the day. In the team’s other two entries will be Raoul Hyman and Ralph Boschung, graduates of BRDC F4 and ADAC Formel Masters respectively.

Luca Ghiotto returns behind the wheel of a Trident car having appeared with the team at Spa and Monza, claiming a shock pole position at the former. Alongside him at the Italian team are Alex Palou – Euroformula Open runner-up in his rookie year of car racing – and 15-year-old Belgian Amaury Bonduel, who is straight out of karting and was second in last year’s French junior championship.

After making his GP3 debut for Trident last weekend, Ling Kang moves to Hilmer, where he is paired up with GT ace Christopher Mies.

Carlin are testing a trio of F3 drivers: Ed Jones, who raced for them in the European championship, Gustavo Menezes, who competed for rivals Van Amersfoort, and Matt Rao, who took second in the British series with Fortec.