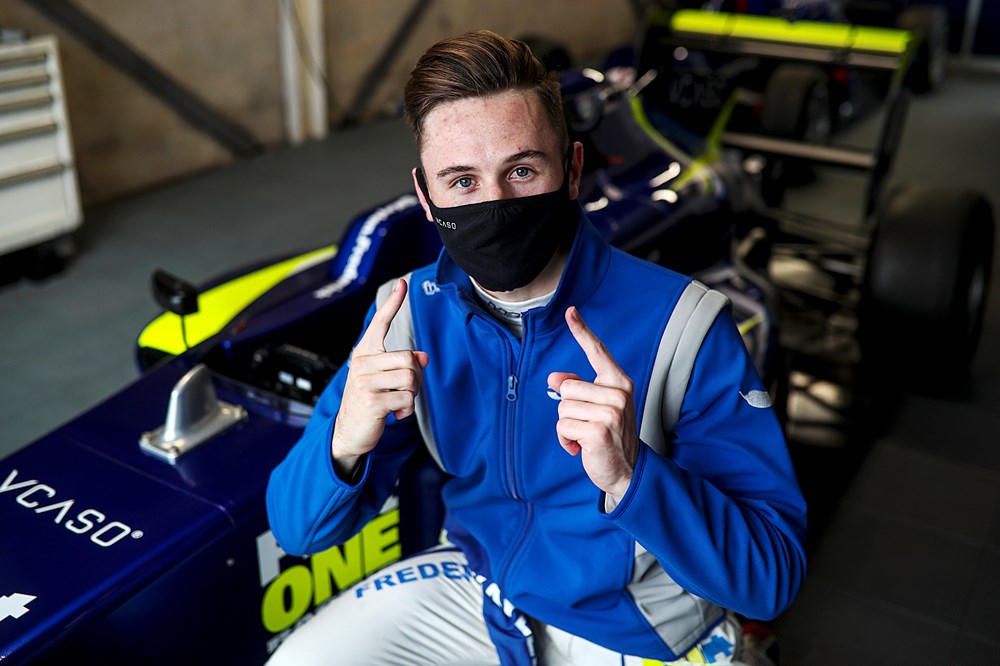 Hitech GP’s Maini gambled on using slick tyres for the race, while most of the grid stuck to wet weather tyres as cool conditions meant that track hadn’t dried from pre-race rain.

Only Maini’s team-mate Reece Ushijima and Lanan Racing’s Bart Horsten joined him in the alternative selection, as all three were already starting further down the order.

Carlin’s Frederick got a good getaway from pole but chaos further down the order meant he wasn’t able to build a gap before the safety car was brought out.

Joshua Mason and Manaf Hijjawi both ran into the gravel at Old Hairpin while title contender Louie Foster span out of the race at Redgate. Josh Skelton and Piers Prior were also caught out in opening lap incidents.

On the restart, Frederick pulled away from Douglas Motorsport’s Ulysse De Pauw, who picked up second off the line. A wide moment for the race leader almost dropped him back into striking range, but he managed to hold onto the position and finished 1.266s clear.

Further down the order, Roberto Faria spent the second half of the race defending fifth place against Benjamin Pedersen. Nazim Azman made it a three-way fight for the position, briefly splitting the pair before Pedersen was able to get back ahead.

Faria held on to match his best result in fifth, with Pedersen dropping back in the final laps as he defended against Azman.

Despite a dry line forming late in the race, none of the drivers running slick tyres were able to make much progress and the trio were the last of the finishers. Maini’s best lap time was almost a second slower than Frederick’s and he ended the race in ninth, behind new Chris Dittmann Racing signing Max Mazorati.

Ushijima passed Horsten late in the race, giving Horsten pole for the reversed grid second race of the weekend.