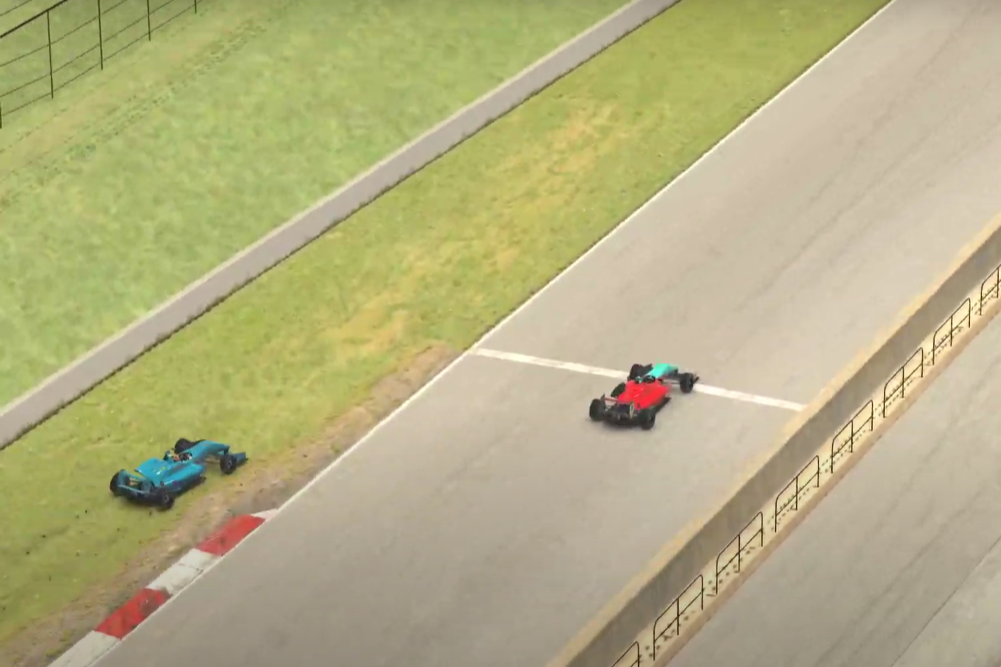 Former Skip Barber driver Trinka beat F2000 Championship Series race-winner Simon Sikes to pole by 0.042 seconds in qualifying, and the pair spent the entirety of the 25-lap race battling for the lead.

Sikes first claimed the position at the second corner on the opening lap, but Trinka reclaimed it at they crossed the line to start the next tour.

A number of larger multi-car crashes and isolated incidents meant there was lapped traffic to contend with early in the race, and a lack of cooperation from some backmarkers gave Sikes his chance to move back into the lead on lap nine at the end of the long Mario Andretti straight.

That lapped traffic gave Sikes a small but crucial gap going into the next lap, and it wasn’t until lap 15 that Trinka reclaimed the position in the same place that he had previously lost it.

For four successive laps they traded places with each other at the end of the straight, with their battle briefly dying down on lap 22 despite a messy start to that tour by leader Trinka. This also brought former Formula V8 3.5 driver Nelson Mason onto their tail, with the Canadian driver looking for a return to single-seaters in F3R Americas.

Mason then suffered a loss of power though, and another dicey battle through the final corners kept Trinka in first going into what would be the penultimate lap.

Sikes slid through the second apex of the Moss corner that leads onto the Andretti straight on the final tour, but it looked like he hadn’t quite got close enough to Trinka to attempt a move. He picked the outside line at the end of the straight though and briefly had a nose ahead, with the top two cars going side-by-side through the Esses.

Victory would be decided by who got the strongest exit out of the lap-ending Whites corner, and sticking to the throttle on the outside line led to Sikes skating onto the grass at the crucial moment. He was sapped of speed off-track and finished 0.467s behind Trinka.

Flinn Lazier was fifth, with Blake Upton just pipping Jay Howard Driver Development’s Viktor Andersson to sixth. Inaugural Esports event winner Ben Waddell was eighth, ahead of the battling Nico Rondet and Zachary Rivard. Only 13 of the 36 entries finished the race on the lead lap.