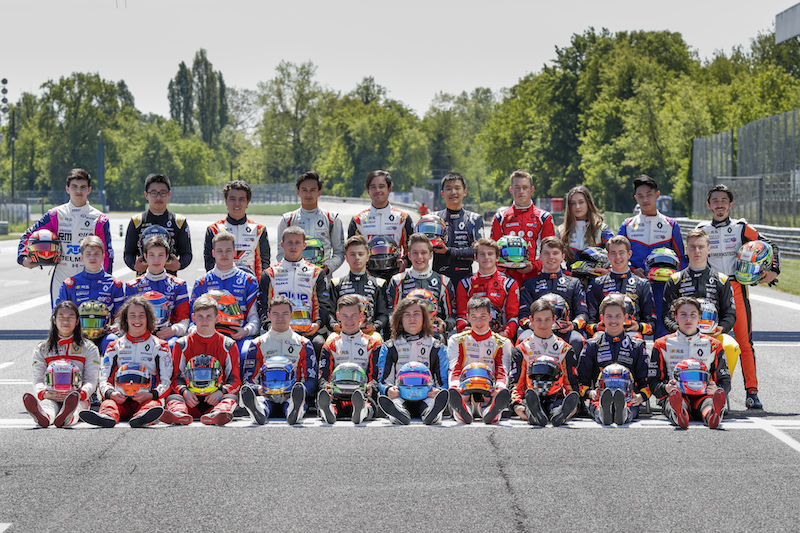 It did have the great storyline of superstar Lando Norris winning the title as a rookie, but otherwise, the 2016 Formula Renault Eurocup season wasn’t a classic: grid numbers were down considerably on past seasons to below 20 at times, and the number of drivers that might be considered genuinely decent prospects arguably struggled to make double figures – again, well down on the norm for this historically significant category for nurturing future Formula 1 talent.

But now it is back with a bang. At a time when the series could have headed into decline, squeezed outside of the FIA’s (now complete) ladder from Formula 4 upwards, and suffering from simply being perceived to be fashionable, Renault has taken decisive action that has?reversed its fortunes?and perhaps taken it to all-new heights.

The calendar has grown from seven events to 10, theoretically providing more value for money (despite increasing costs), with dates at Monza, Silverstone and Pau coming across from the NEC – which looks likely to now be a feeder into Eurocup for rookies – and Alps series, which deceased at the end of 2015. All tracks except from the famous Pau are, were recently (Nurburgring), or?will be in the near future (Paul Ricard) F1 venues.

Another thing that will have undoubtedly helped is the close affiliation to a factory F1 team – something that probably took affect too late to boost the appeal ahead of last season. Renault has?made this a formal tie-up with the promise of places in the Renault Sport Academy for two drivers from the 2017 field, and it’s?gone ahead and signed up two rookies anyway before a wheel has been turned in anger.

A 30-car grid was locked in by the beginning?of March, when the other major junior single-seater categories were struggling to reach two-thirds of that (and many still haven’t).

Talent runs deep in this field, and below we?have picked out 10 drivers in particular who should be worth keeping an eye on – although to keep it to only 10 has been?no easy task. By coincidence, half of these return for another season while half?of these come from a?rookie crop that features three?each already on the books of Red Bull and Renault, and holds six current F4 titles between them. 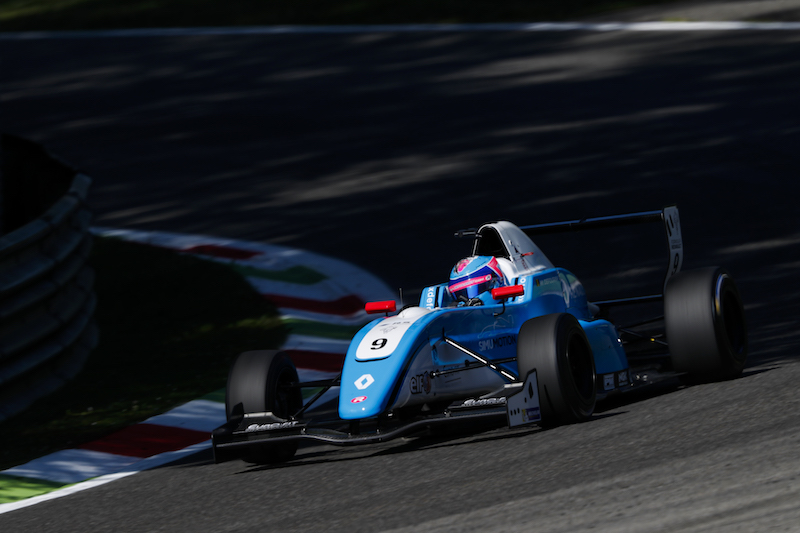 After effectively?running Norris closest last term before?finishing up third, it was expected Defourny would move on to a series like GP3 for 2017, but he instead sealed?a relatively late return with unfinished business and the title as the clear target. He does so with R-ace GP, a team with which?he gelled so well after being forced into an?in-season switch in his rookie Formula Renault campaign (spent mostly in the NEC) in 2015.

There’s little doubting this combination’s outright speed, but this does need to be turned into good grid positions and good race results more often. There’s also the question of how much performance he can find staying with the same team for another year versus those going into their second seasons and maybe changing teams. 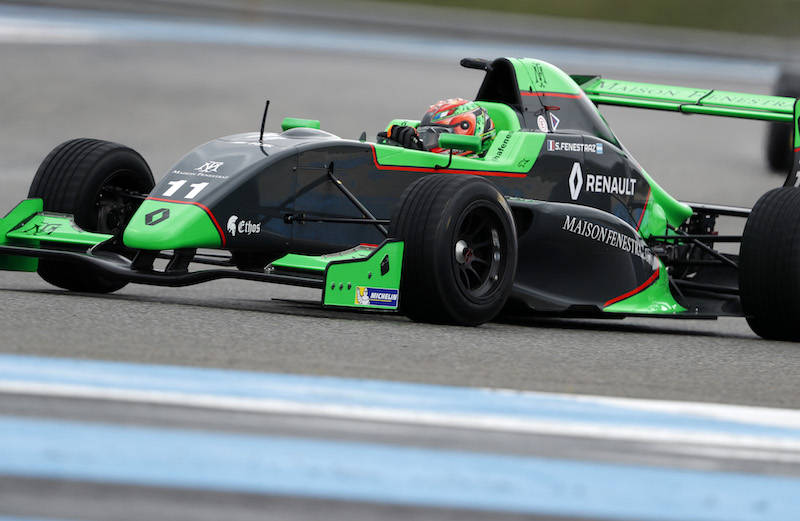 Fenestraz was second-best rookie behind Norris last year, and has not only now taken the Briton’s seat place as team leader at?Josef Kaufmann Racing but also signed with the same management firm, ADD Motorsports. He will therefore have a top environment around him, and the pressure will be on to produce similar results.

Both last season?and in French F4 the year before, the Franco-Argentine demonstrated his considerable?ability on street circuits and in the wet, and he combined these two strengths to win in Monaco last year. To claim?the title he’s going to have to show more in ‘regular’ conditions, and turn fourth places into more podiums and wins. 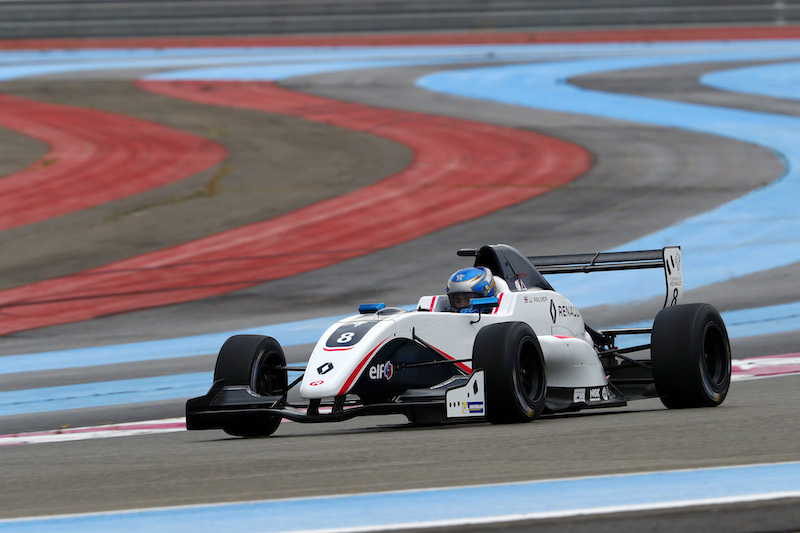 Palmer’s first season in Formula Renault last year – yielding seventh in the standings – was a little disappointing from?a driver who came in as the dominant BRDC F4 champion and McLaren Autosport BRDC Award winner. His strong reputation does remain, and therefore he’s considered a strong title contender, but the pressure is going to be on to live up to that promise he’s shown previously and in this company it won’t be easy.

There were promising signs at times last year – like his win at the final round at Estoril – and the pre-season pace has looked good. Having Defourny in the R-ace GP team should be a benefit again, and although it’s another barrier to the title, finishing second to him would not be a disgrace. 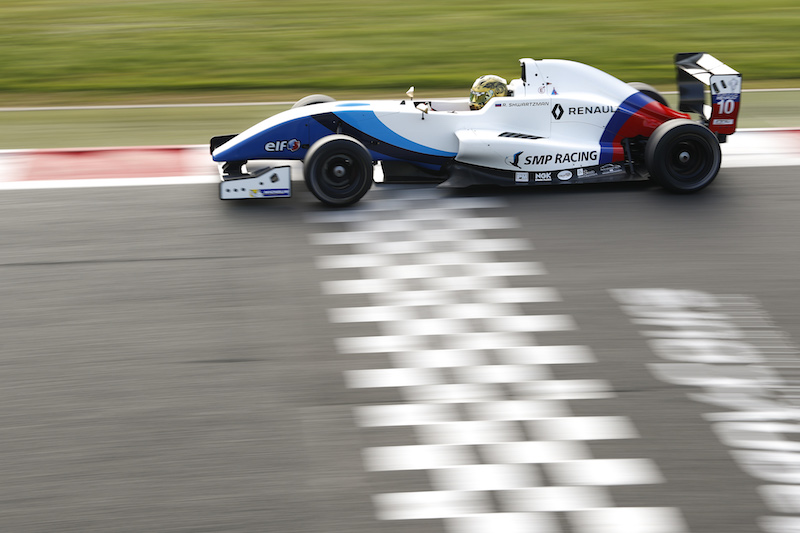 Shwartzman makes an interesting move from Josef Kaufmann Racing to?R-ace GP for 2017, no doubt hoping the pace Defourny showed last year means the French squad has the?faster package. It will be a new experience for a driver who had also run with a German team – Mucke Motorsport – in F4 in the past, but potentially a useful one given backer SMP Racing is working with ART Grand Prix on its upcoming LMP1 project.

The Russian showed better last year in the NEC, where he was twice a winner in the closing rounds, than in the Eurocup, where he only managed one podium, but he’s looking very quick in pre-season. Last year he maybe struggled in the same team as his fellow pocket-rocket and former karting and F4 rival Norris, but new team-mates Defourny and Palmer should be well within his reach. 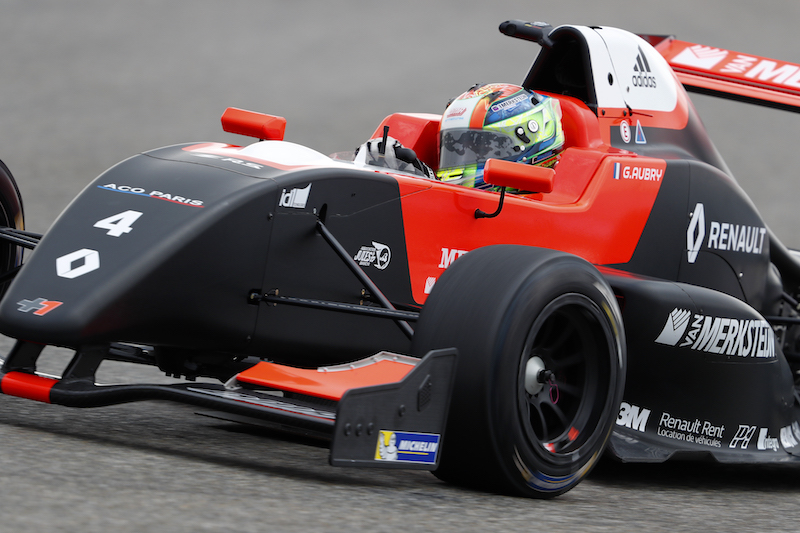 Aubry was close to matching Fenestraz in French F4 in 2015, but after they stepped up to Formula Renault together with Tech 1 Racing last year, he was left trailing and finished 12th in the Eurocup standings.

Over the winter though he’s gone from fourth and last in the pecking order at the team to becoming?the leader, and he’s frequently been a leader in pre-season testing. A genuine title challenge would require a pretty big step up from last season, but watch for him being very quick on occasions at least. 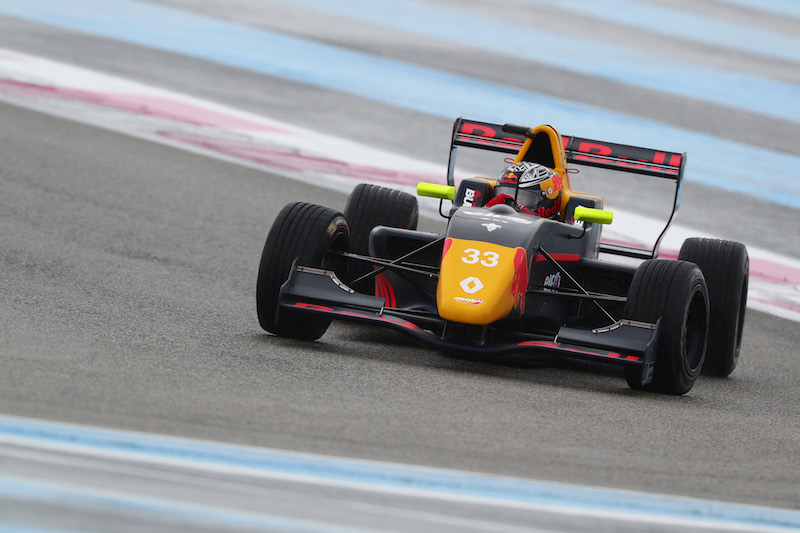 After his year out of racing – banned for an MSA Formula incident in late 2015 – there was an expectation Ticktum would make his full-time return this season in Formula 3, in which?he privately tested at length during last year and ran inside the top 10 in Macau. Then came a shock call up to?the Red Bull Junior Team; given he had been under observation by Helmut Marko, running a branded helmet, when he had his indiscretion?at Silverstone, most had assumed that chance had gone.

Marko’s more interested in somebody who’s flat-out fast than squeaky clean though, and with F3 not flavour-of-the-month with the Austrian, Formula Renault was chosen for Ticktum, allowing him to effectively pick up where he would have been in 2016. Arden being new to the category, with three rookie drivers, isn’t ideal but Ticktum is good enough to make a difference, and has shown flashes of performance pre-season. 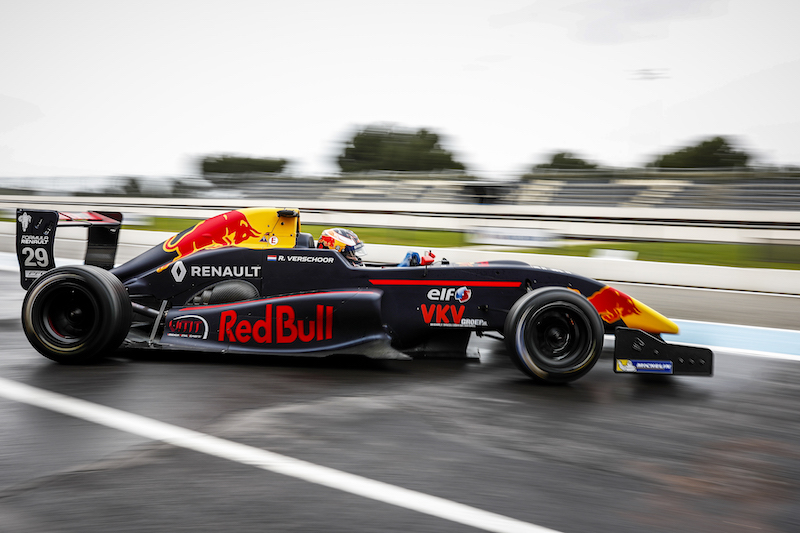 Verschoor’s another driver you might have expected to have moved up to F3 after his stunning double titles in SMP and Spanish F4 last year, but like new Red Bull stable-mate Ticktum, the move into Formula Renault gives him a chance to fight for a title straight away rather than undergo a potentially tough learning year.

In MP Motorsport, he’s got a?team that’s not new but is playing catch up after a year away that followed a poor 2015, but with a squad of good drivers it should be able to get on the pace and, as he was?in the Toyota Racing Series at the start of this year, Verschoor?should be a strong contender. 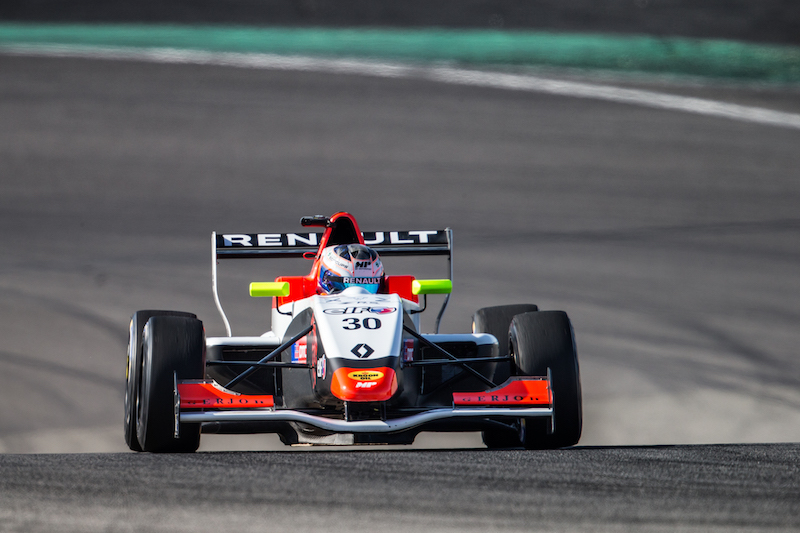 He was overshadowed by Verschoor in SMP F4 by the end of 2016, but it’s worth remembering that Opmeer – who similarly?stepped out of karts with the backing of the Dutch federation KNAF – had the upper hand during the early part of the year.

Being independent will have hampered him against the Red Bull-backed Verschoor as last season wore on, but as he makes the move up to Formula Renault he’s gained the French manufacturer’s support, and he’s often looked the quicker of MP Motorsport’s two Dutch prospects through winter testing. 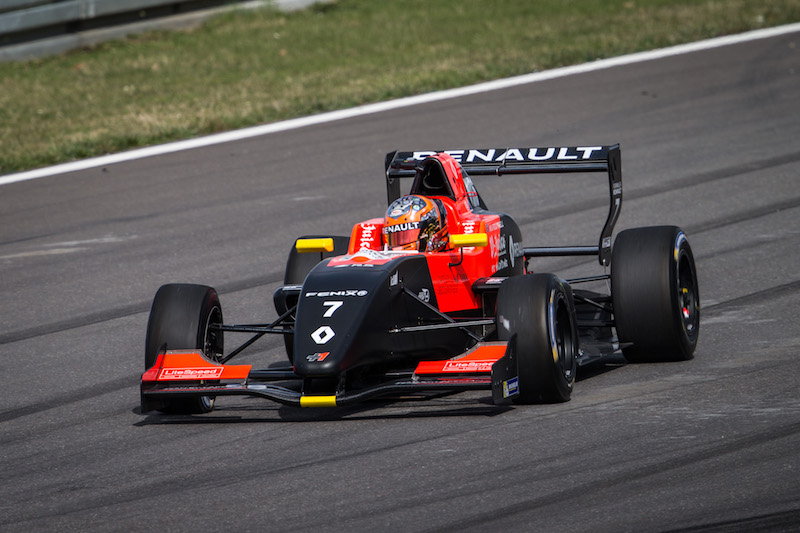 Having succeeded Norris as champion in Britain’s F4 series, Fewtrell now follows in his footsteps to Formula Renault, although another title here in season one seems a big ask against such tough opposition.

It was super consistency rather than blistering pace that won him the F4 title, and a a similar approach could yield a strong points haul here. Driving for Tech 1, after Infinity management stable-mate George Russell won on his Eurocup debut with the team at the end of 2015, Fewtrell does have the support of the Renault Sport Academy. 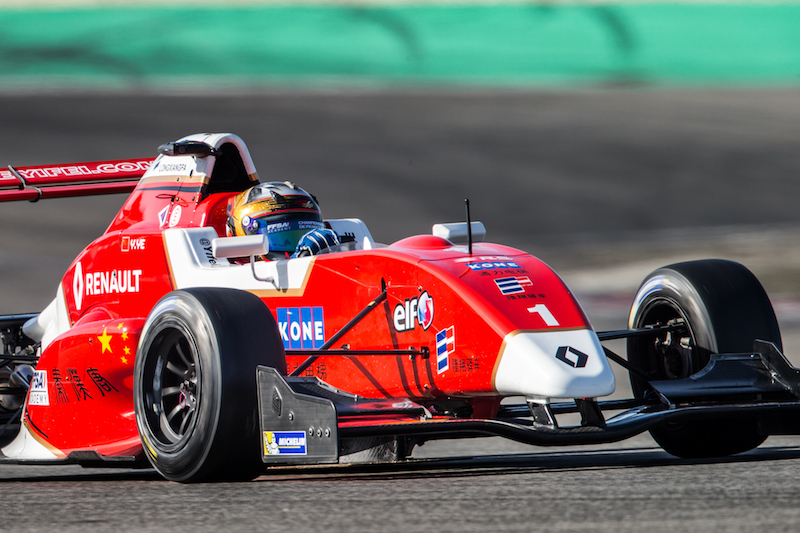 His winter testing form – he was the top rookie at the initial test at Estoril at the end of 2016 with R-ace GP before joining Josef Kaufmann Racing – suggests he can be a competitive force in Formula Renault too, even though he’s unlikely to be in the title fight.

Who else is there? 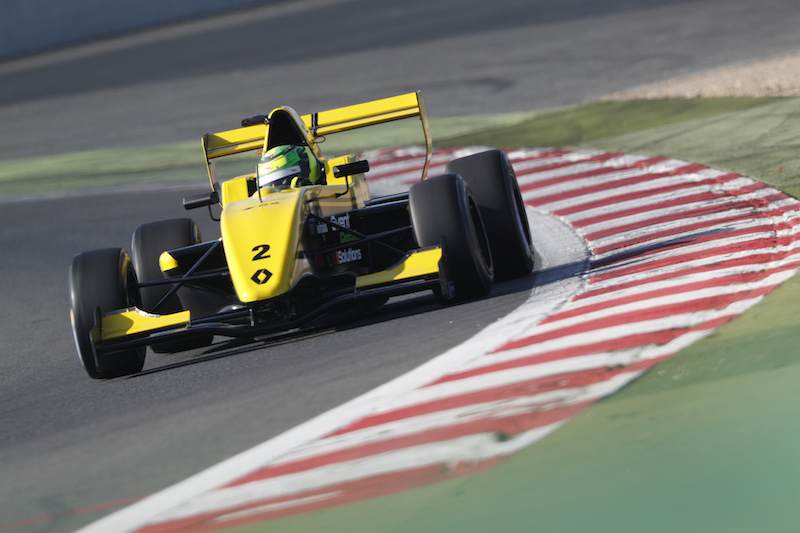 Joining Fenestraz and Ye at Kaufmann’s team is Luis Leeds, who took the fight to Fewtrell in F4 last season but has much to prove after his surprise Red Bull status lasted only a year.

Rounding out another strong line-up at R-ace GP is another F4 title outsider from last year: Telmex-backed Raul Guzman who was third in Italian F4.

Aubry and Fewtrell are joined at Tech 1 by Australian Thomas Maxwell, who showed decently in BRDC British F3 last year, and Thomas Neubauer, who faces a big step up from French karting.

A second Red Bull Junior lines up at MP Motorsport in the form of American F1600 champion Neil Verhagen, who is likely to trail Verschoor and Opmeer over the season but could be quick on occasion.

Alongside Ticktum at Arden is another Australian Zane Goddard, who won in British F4 last term and has shown speed in testing, and Belgian Ghislain Cordeel who mixed it on selected appearances in 2016 with the small GMMA team.

Telmex also supports Axel Matus, who followed a couple of quiet years in French F4 by taking both the Mexican F4 title and Formula Abarth-based Panam GP series back home. He is at AVF, which also has Henrique Chaves, who will want to progress into the top 10 going into his third season, and Peruvian Rodrigo Pflucker, but its most interesting prospect could be Gregoire Saucy, who has looked quick after coming fourth?in the V de V Challenge last year.

He was beaten to the title there by Australian Alex Peroni, who looks likely to lead the Fortec assault and could spring more surprises like making the podium (before another’s time penalty was rescinded) on his debut at Estoril. Alexey Korneev joins the team for his second season, alongside rookies Frank Bird and Najiy Razak from British F4 and Asian Formula Renault respectively.