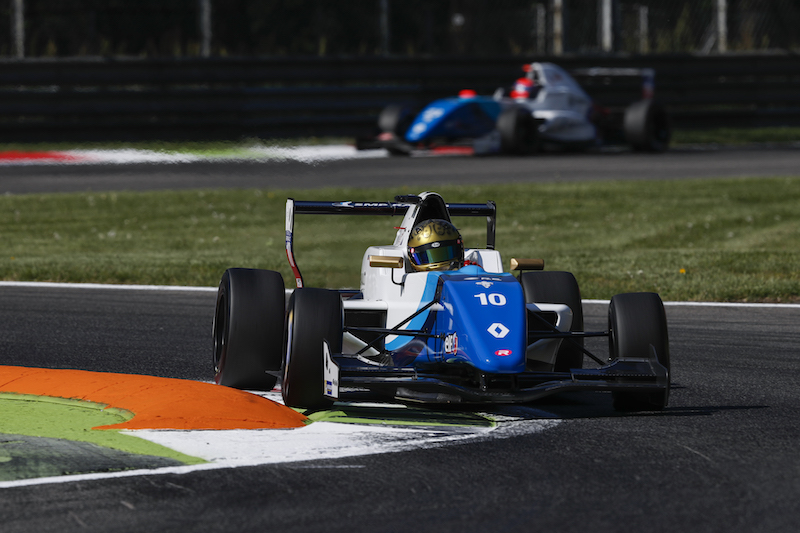 Robert Shwartzman has claimed pole position for the opening race of the Formula Renault Eurocup season at Monza.

With the 30-car field split into two groups for qualifying, Shwartzman outpaced R-ace GP team-mate and Friday pace-setter Will Palmer by 0.16 seconds to top the second group.

Gabriel Aubry beat former Tech 1 team-mate Sacha Fenestraz by 0.036s in the first group, but Shwartzman went underneath the Frenchman’s time of 1m49.051s with four minutes remaining in the latter segment and went on to lower the mark to a 1m48.506s.

That initially put him four tenths clear of second-placed Palmer, who closed the gap in the remaining minutes but could not topple the SMP-supported driver.

While Palmer will head Fenestraz on row two, Fortec driver Alex Peroni impressed at only his second Eurocup event to secure fifth on the grid, the V de V champion beating Yifei Ye to third in group two by 0.002s.

Max Defourny, the highest-placed driver from 2016 returning this season, was on the other side of the draw to team-mates Shwartzman and Palmer and will line up sixth.

It was a disappointing session for the Red Bull Junior Team. Dan Ticktum could only manage sixth on what appeared on paper to be the easier side of the draw in group two, a result matched in the first segment by Richard Verschoor.

Neil Verhagen was only 11th in the first group, putting him 22nd on the grid, with he and Verschoor’s MP Motorsport team-mate Jarno Opmeer eighth quickest, or 16th on the grid.