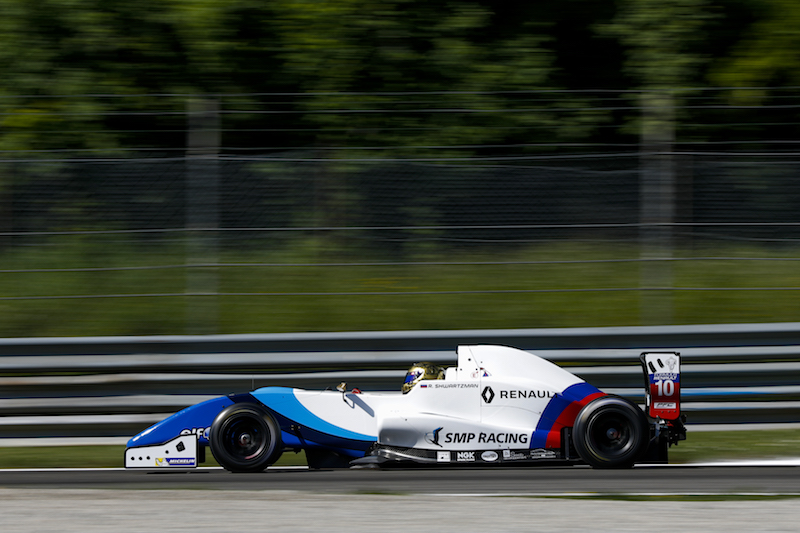 Robert Shwartzman scored his first Formula Renault Eurocup win in the opening race of the season at Monza, which was punctuated by two safety car periods and ended with a red flag.

Shwartzman, driving for R-ace GP for the first time after a switch from Josef Kaufmann Racing over the winter, made a good start from pole position to lead fellow front row starter Gabriel Aubry into the first turn.

The safety car came out at the end of the first lap after AVF driver Rodrigo Pflucker ran wide into the gravel at the first Lesmo and spun across the track into the path of Ghislain Cordeel.

The race restarted at the end of lap four with Shwartzman making a good gap, while Sacha Fenestraz passed Will Palmer for third into the first chicane with a spectacular dummy to the inside line.

The Franco-Argentine then passed his former Tech 1 team-mate Aubry for second down the inside of the Parabolica before the end of the first green-flag lap, when?Shwartzman held a 0.8-second lead.

The safety car was back on track two laps later when Chinese Renault protege Sun Yue Yang ran over the car of Alexey Korneev as they checked up for the spun machine?of Jean-Baptiste Simmenauer at Turn 2, with Sun pulling over at Curva Grande with suspension damage.

At the restart there was only one minute left on the clock, and Shwartzman came under attack down the pit straight from Fenestraz, who nosed ahead as they approached the first chicane.

Shwartzman was braver on the brakes though on the inside line and kept the lead, before the race was then halted early when Red Bull Junior Neil Verhagen hit the barriers on the approach to the second chicane following contact with Presley Martono.

Having just been ahead of Fenestraz as they started that lap, Shwartzman was declared the winner.

Palmer went from challenging Aubry for third on the entry to?the first chicane to being passed by R-ace GP team-mate Max Defourny come the exit, and he was challenged by Henrique Chaves at the second chicane, but the red flag meant the Briton kept fourth.

Although he lost out in early battles with Defourny, Alex Peroni still took sixth in front of Chaves, while Max Fewtrell passed Yifei Ye around the outside of the second chicane just prior to the second safety car to be the lead rookie in eighth.

Richard Verschoor got ahead of fellow Red Bull Junior Dan Ticktum for the final point in 10th.