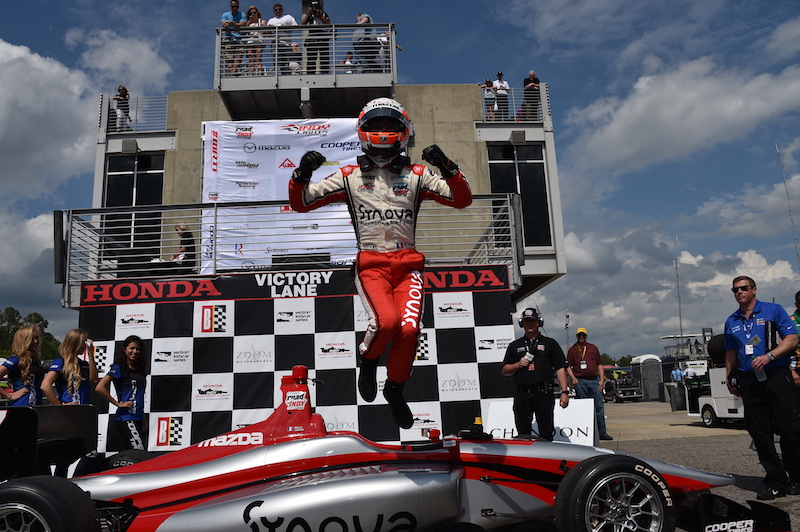 Kaiser had claimed pole position ahead of Colton Herta, but as the rolling start was waved off for an unsatisfactory formation, the pair made contact with Herta dislodging his front wing on the rear of Kaiser’s car as he tried to dive to the pole-sitter’s inside.

As Kaiser checked up, he was hit from behind by Santiago Urrutia, whose car in-turn was mounted by the following Pato O’Ward, with both losing bodywork.

With Herta pitting for a new front wing, Kaiser led at the restart but he was passed on the inside of the Turn 5 hairpin by Jamin.

The Frenchman quickly built a gap at the front, and finished up 2.6 seconds ahead of Kaiser after nearly 40 minutes of racing.

Kaiser absorbed race-long pressure from Neil Alberico, who followed up his maiden podium in the St Petersburg opener with another rostrum.

Dalton Kellett was sixth in front of Shelby Blackstock, with O’Ward recovering to eighth after passing Pelfrey team-mate Juan Piedrahita, who ended up 11th behind Nicolas Dapero and Herta.

Aaron Teltiz, who won his debut race at St Petersburg, had a quiet day, qualifying only 13th before tripping over Belardi team-mate Blackstock off the final corner at the start and breaking his front wing.

In the third Belardi car, after losing laps fixing the initial damage, Urrutia treated the rest of the race as a test, pitting for adjustments before retiring near the end.