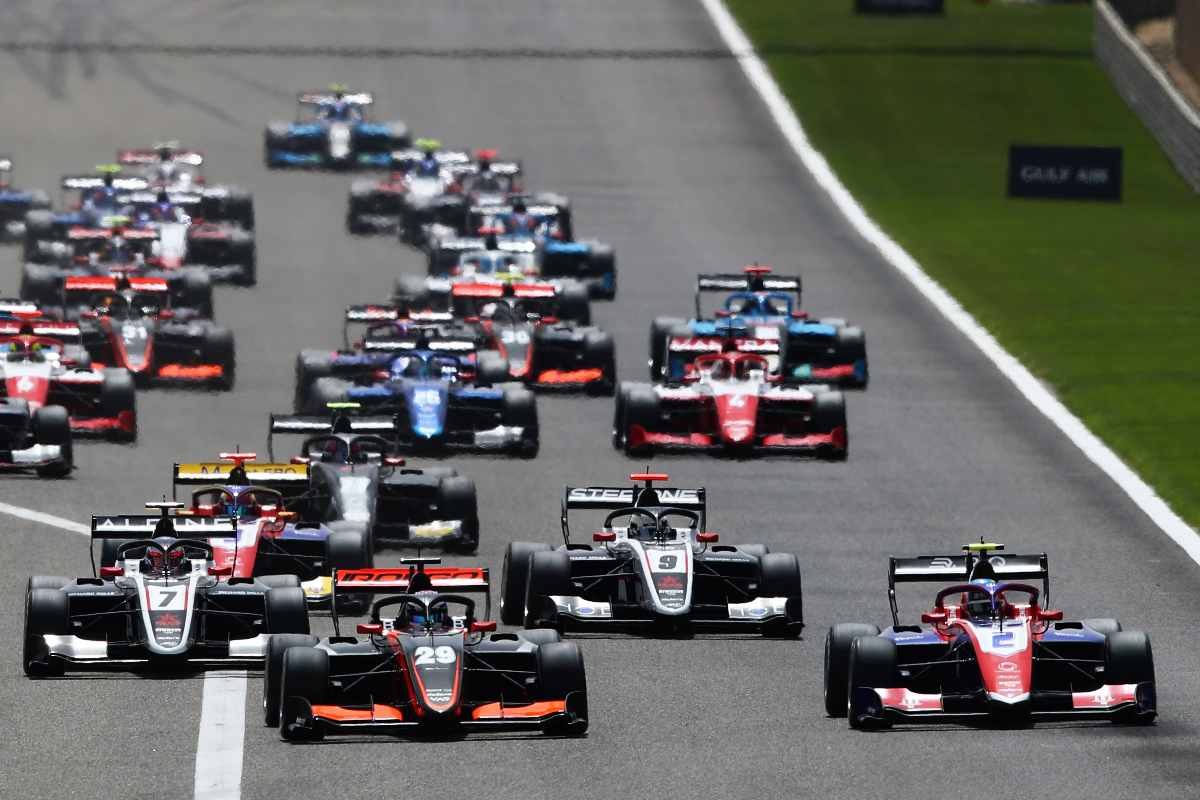 FIA Formula 3 was back racing over the weekend as the championship took to Bahrain for the first time. There was plenty to take away from the season-opening round, as Craig Woollard explains

Back in its traditional slot as the third level of single-seater racing on grand prix weekends, the FIA F3 Championship ran two highly intriguing races with a pair of French winners in its first round of 2022. Some minor changes mean that how some races may play out in future may change, but the early indications are that several teams can get right in the mix this year.

There wasn’t a clear competitive order based on the first round, which bodes well for exciting and open racing in coming rounds, and there was plenty learned for everybody to take going forward ahead of round two at Imola next month.

Listen to our podcast reviewing the F2 and Formula 3 action in Bahrain below, or find it on Breaker, Google Podcasts, Overcast, Pocket Casts, RadioPublic, Castbox, Apple Podcasts and Spotify. 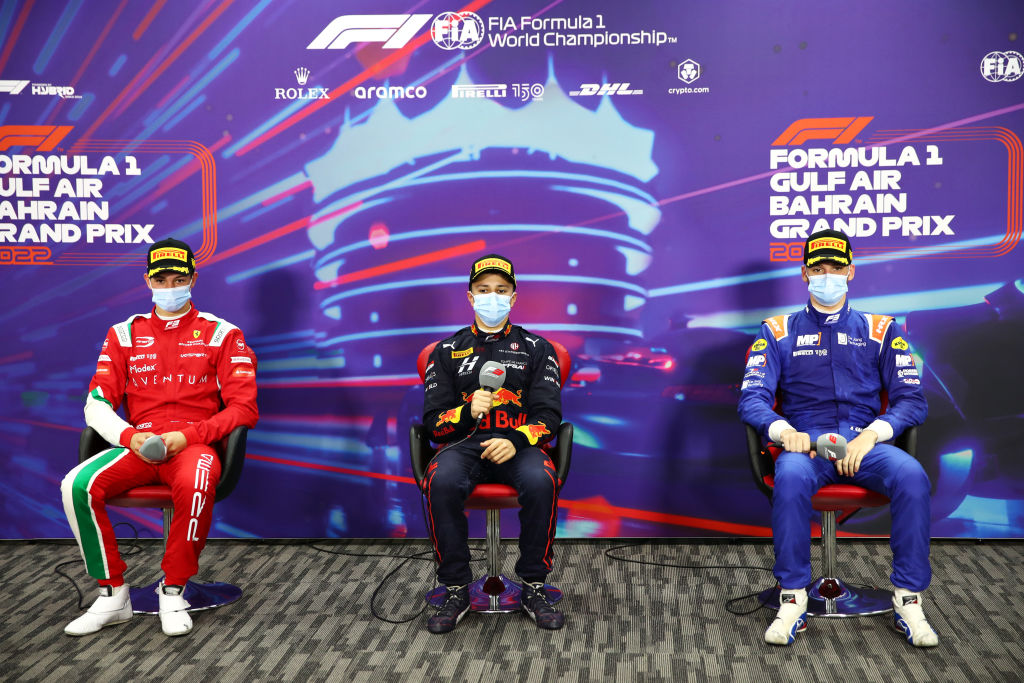 The changes to rear tyre construction this year means there will be more emphasis on tyre preservation than perhaps normal for F3. This could be noticable at some more circuits, following the trip to Bahrain’s abrasive track surface that was last visited by FIA F3 predecessor GP3 back in 2015, and Formula Scout asked the sprint race podium trio for their thoughts.

“We already knew before coming to this weekend [it was high degradation], we’ve done a lot of long runs in testing, and sometimes it even felt like ‘no, I’m not even able to do the whole race distance, all 24 laps’,” MP Motorsport’s Alexander Smolyar said.

“In the end it was really nice because there are some races on this calendar that you need a lot of pace to win. This is the kind of track that you need a lot of knowledge about the tyres, just trying to manage the tyres. Because if you don’t save the tyre, maybe you’re not even going to make it to the end. That’s how bad the degradation on this track is. It’s a different approach of racing, and it’s also fun.”

For Hitech GP’s Isack Hadjar, the sprint race victor after Prema’s on-the-road winner Ollie Bearman got a track limits penalty, it wasn’t so much of an issue.

“Bahrain is very demanding for the tyres. But I was quite surprised regarding the laptimes,” he revealed.

“Throughout the race I think I was on the last lap only a second away from my fastest lap, so tyre deg wasn’t that much of an issue. But I guess tomorrow will be quite similar, so we have a good base.”

Bearman, who like Hadjar was making his debut, added: “The rookies don’t have many references for tyre wear. For this [track], obviously the tyre wear is high, but I’m sure when we go to some of the lower energy tracks it will feel like there’s no deg compared to Bahrain. But in Bahrain the deg is super high and it makes it quite tough.” 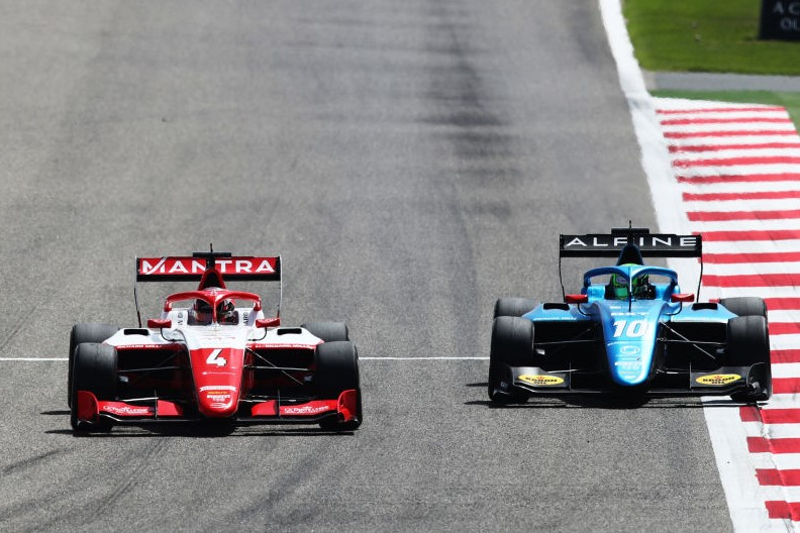 Trident’s Roman Stanek, meanwhile, remarked after qualifying that “it’s really nice to drive a car with so much grip and you can feel how fast you can go around the high-speed corners” but expected tough conditions for tyre managements due to “a lot of sand and also a lot of wind” reducing cornering grip.

Since the introduction of the Dallara F3 2019 car, Prema has primarily been the team to beat. Last year brought Trident seriously into the mix, but Hitech, MP Motorsport, Campos Racing and the debuting Van Amersfoort Racing all looked to have some very strong pace last weekend.

VAR’s Franco Colapinto took pole on debut, marking the first time the team and its driver have visited Bahrain bar pre-season testing there, and he immediately commented on what would be required to be on top come season-end. He was 25th in race one following contact and a front wing change, but fifth in the feature race puts him sixth in the standings and VAR in fifth.

While things didn’t work out for Prema (Arthur Leclerc’s excellent charges to fifth and second places aside) and Trident, the pace undoubtedly is there with both teams. The latter currently holds the teams’ title, but a pair of punctures for Stanek was one of a fair few problems it faced to leave with eight points.

… but a GP3 great appears to hold the upper hand

The team that seemed to be most consistently towards the front through the weekend was ART Grand Prix – the absolute force of GP3 back in the day. It won the feature race with Victor Martins, all three cars qualified in the top six and showed very strong pace all weekend, the team sits atop both points tables and would have had a bigger buffer if not for Martins and team-mate Gregoire Saucy colliding in the sprint race. 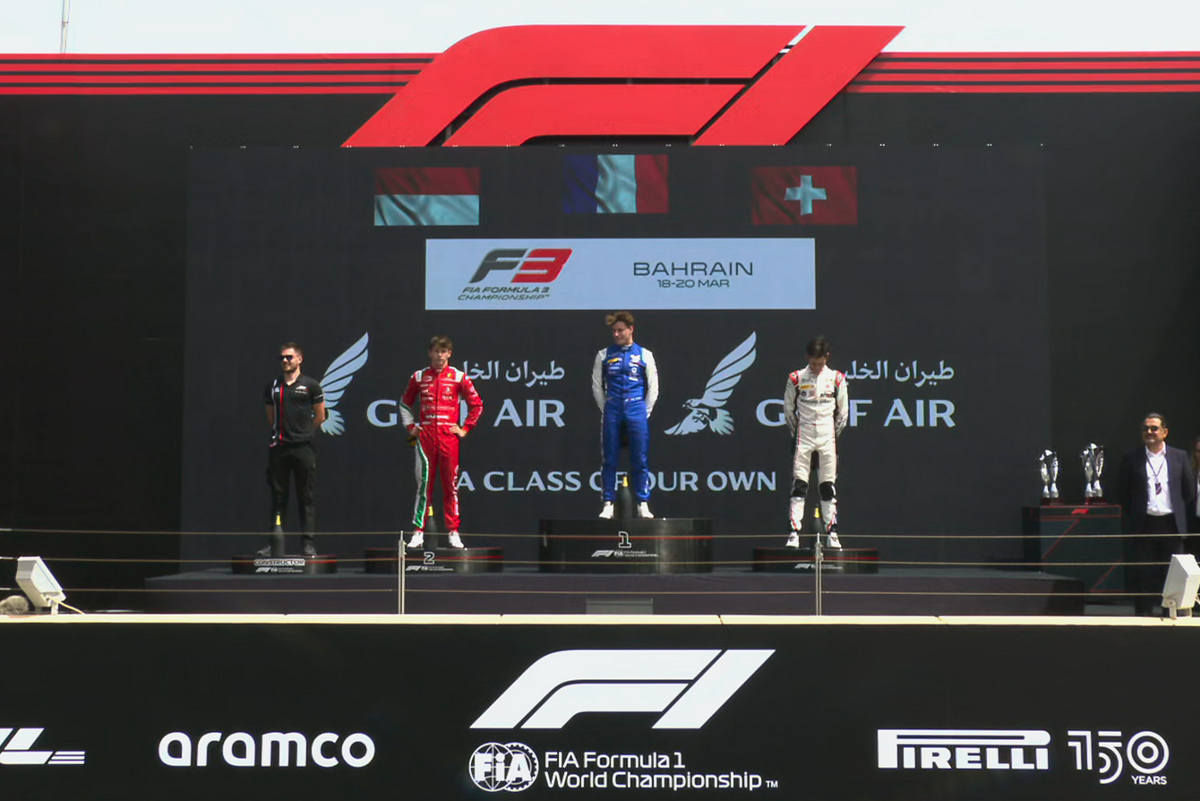 Reigning Formula Regional Europe champion Saucy finished third in the feature race, and said: “It was starting well in qualifying for both me and my team-mates, we were P3, P4 and P5. Yesterday was a more difficult day, we need to forget it.

“Me and Victor we still have a good relationship. We speak a lot together, and we learned from the mistake we made together. We came back stronger today, together and I’m really happy for him for the victory and really happy for me also for P3. It was a really good day after yesterday.”

Martins meanwhile said that “It felt just awesome, especially after the weekend I had. I was struggling a bit in practice, maybe I wasn’t, you know, kind of ready for the rivalry with the others, so I was just down the field and I had to come back in qualifying. I did the job to be P5 and then with the penalty [for Kush Maini for not stopping at the weighbridge], P4.

“But I think it was a good start to the season, I just needed to release a bit of the pressure and then after that, it was good. Yesterday in the race, it was just a misunderstanding inside the team. But it makes us a lot stronger, I think the relationship is still there.

“We will still work really well all together. And that’s the most important. And today I just wanted to take the win. I knew I had the pace from the test, I just had to stay calm, take the opportunities, which I had done with Stanek at the restart and Colapinto also in the end to then be a bit more comfortable at the end of the race.”

Juan Manuel Correa, meanwhile, was right in the mix and recorded his best result since his return to racing with fourth in the feature race.

Colapinto right to be realistic after strong VAR start 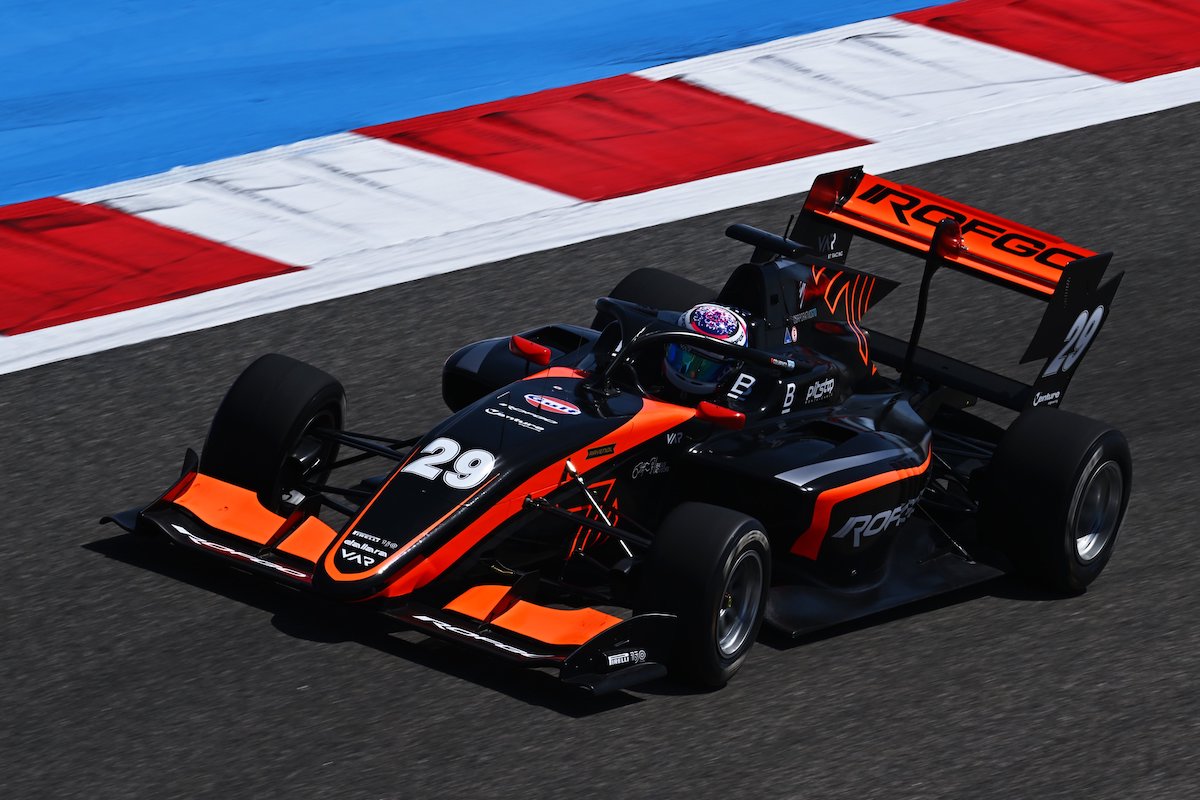 Speaking of Colapinto, he and VAR were a surprise package. After taking pole, he explained to Formula Scout his move to the team after initially struggling to find a berth on the F3 grid, and how Bullet Sports Management kept him in racing.

“We had some options and it was honestly a really, really difficult decision,” he admitted. “Bullet, that is always behind me and supporting me since a few years ago, they’ve just been pushing a lot to help me and put me in F3.”

When asked if pole had changed his season targets, he replied: “No, at the moment. Of course I’m being realistic and we are a new team, we don’t have a lot of experience. Not even myself, I don’t know a lot of tracks of the season, and I think it’s step-by-step we need to start to go forward and we need to work together like we are doing in this weekend.

After the dissapointing sprint race, with the clash that caused Stanek’s first puncture, Colapinto faded to third from pole in the sprint race before a track limits penalty dropped him another two places. It was still a strong start for driver and team, but Rafael Villagomez and Reece Ushijima did not get near the points so there is still a long way to go to become a consistent frontrunning force.

Perhaps the most hotly anticipated debutant this weekend was Bearman. The Ferrari junior steps up from Formula 4 as the ADAC and Italian champion, raced in Formula Regional Asian Championship during winter, and almost won his F3 debut.

“Jumping from F4 to F3, it’s quite a big step. The main difference is really the weight of the car,” he said of the step up. 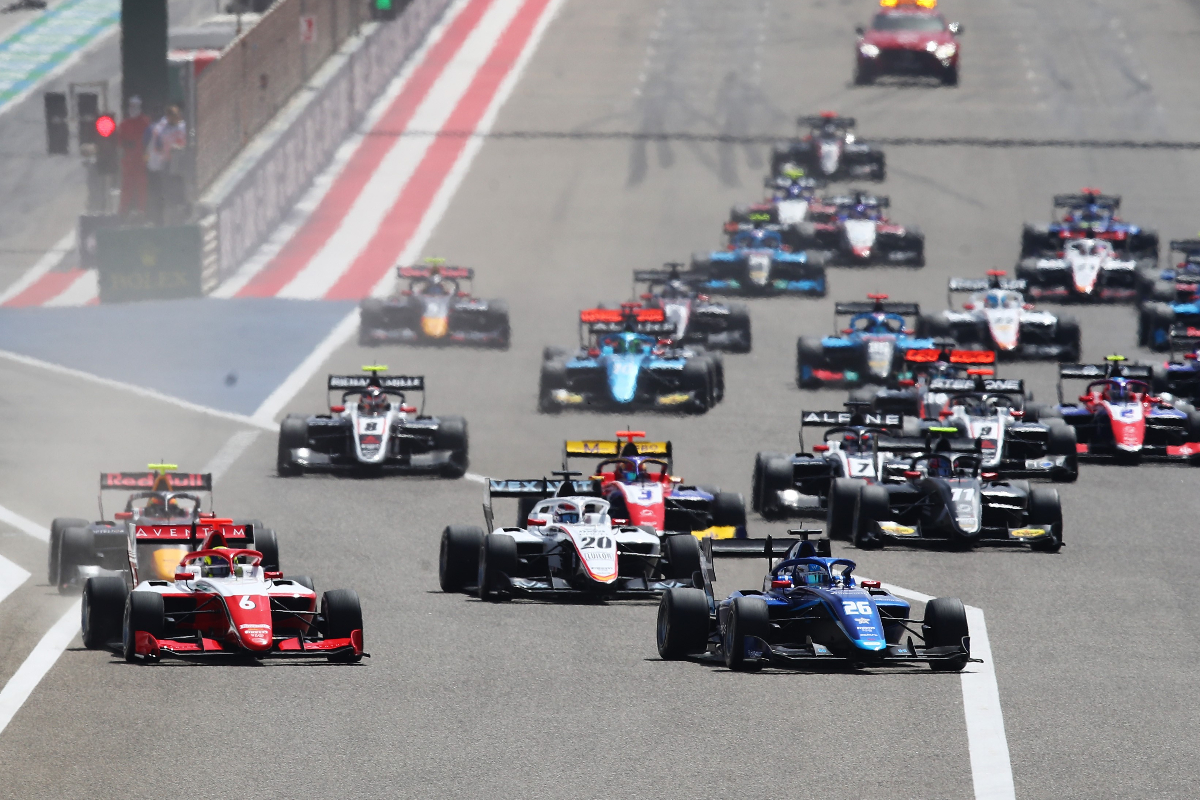 “It behaves quite differently, there’s a bit more inertia and stuff like that. Everything is kind of magnified, so that was kind of the biggest thing to get your head around. But with these [test] days, especially in Bahrain, started to feel more at home in the car and it becomes a bit more natural.”

Formula Scout asked whether there was any added pressure running with Prema, which has run all three series champions.

“Prema has been super successful across F3 and F2 in recent years. I wouldn’t really say it adds any pressure, I just focus on my own job to start with. If anything, it’s a bit of a reassurance because I know that the car is there, I just need to work on myself. I’m sure once we’re past the first couple of rounds, when we can kind of see where we are, then it starts to get a bit more pressure and a bit more serious. But at the moment it’s no expectations, just focusing on always improving.”

Bearman felt he was “in quite a good spot” after the single free practice session, but “qualifying was a bit more difficult” as he was only 11th fastest and half a second off the pace. “We just lacked pace, we need to look into it and see why,” he said.

Despite a penalty costing him a debut win, Bearman was far happier with how the sprint race went from second on the grid.

“I had a decent start, got to P1, and after that, we just managed the tyres. The penalty was a bit unfortunate, but we’re still happy with what we learned.”

By following that up with sixth in the feature race, he sits third in the standings behind Martins and team-mate Leclerc.

“I’m quite happy to finish in P6 [in the feature race] considering where I was after lap three. I didn’t get the best of starts, I didn’t put myself in the best places in the opening laps, and it’s something we need to work on. The pace was really strong. Overall, I’m happy with my first weekend in F3, we have to hold on to the positives.”