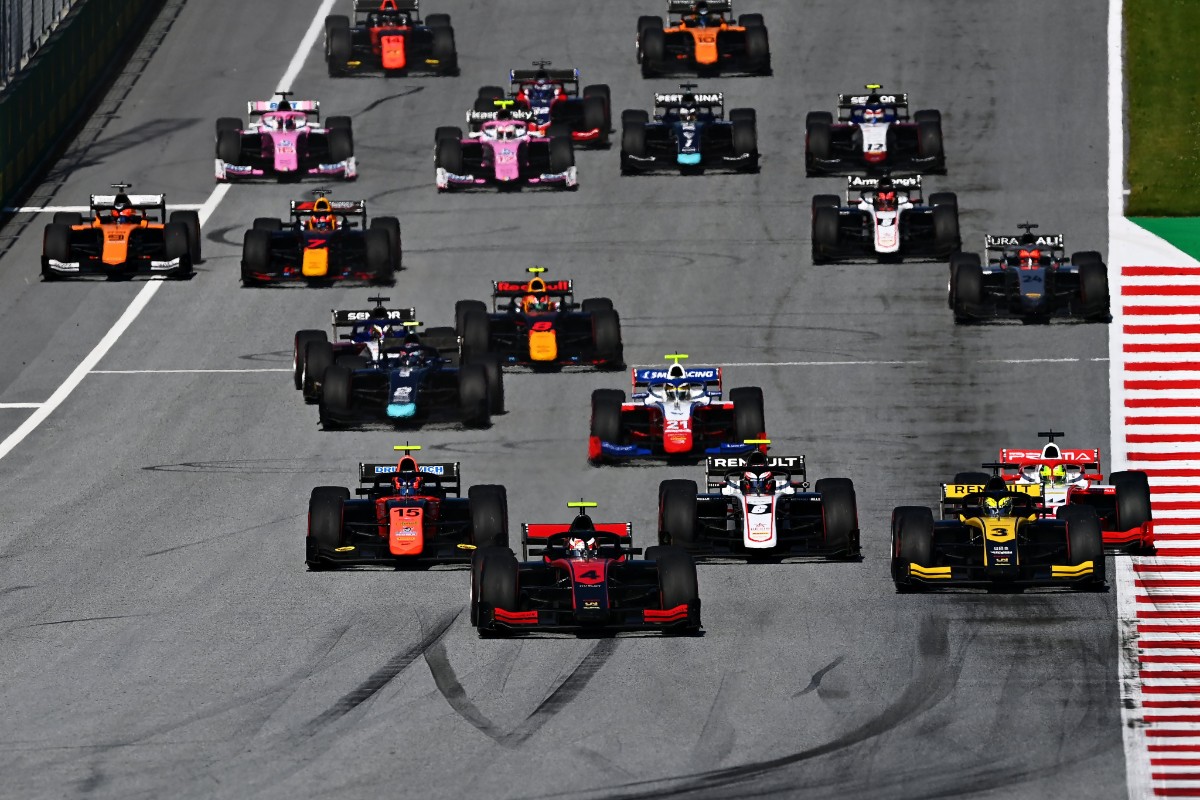 The Formula 2 season may have begun behind closed doors at the Red Bull Ring, but the on-track action still left a lot to talk about. Josh Suttill and Peter Allen run down the big stories

Following a lengthy off-season, the 2020 F2 season immediately delivered a dramatic weekend with a scintillating feature race that was arguably every bit as good as the stellar Formula 1 opener that it was supporting.

Virtuosi Racing’s Callum Ilott won the feature race after his team-mate Guanyu Zhou suffered a gearbox issue whilst leading. Rookie Felipe Drugovich was the surprise star of the weekend, starting the feature race from second on the grid and then winning the reverse-grid sprint race.

Six different drivers finished on the podium on the opening weekend – in contrast to the three that locked out both podiums during the 2019 opener – with just nine points covering championship leader Ilott from seventh-place Christian Lundgaard in the drivers’ standings.

Formula Scout highlights some of the key talking points from the first weekend of a new season for F1’s leading support category.

The rookies are right in the title race… 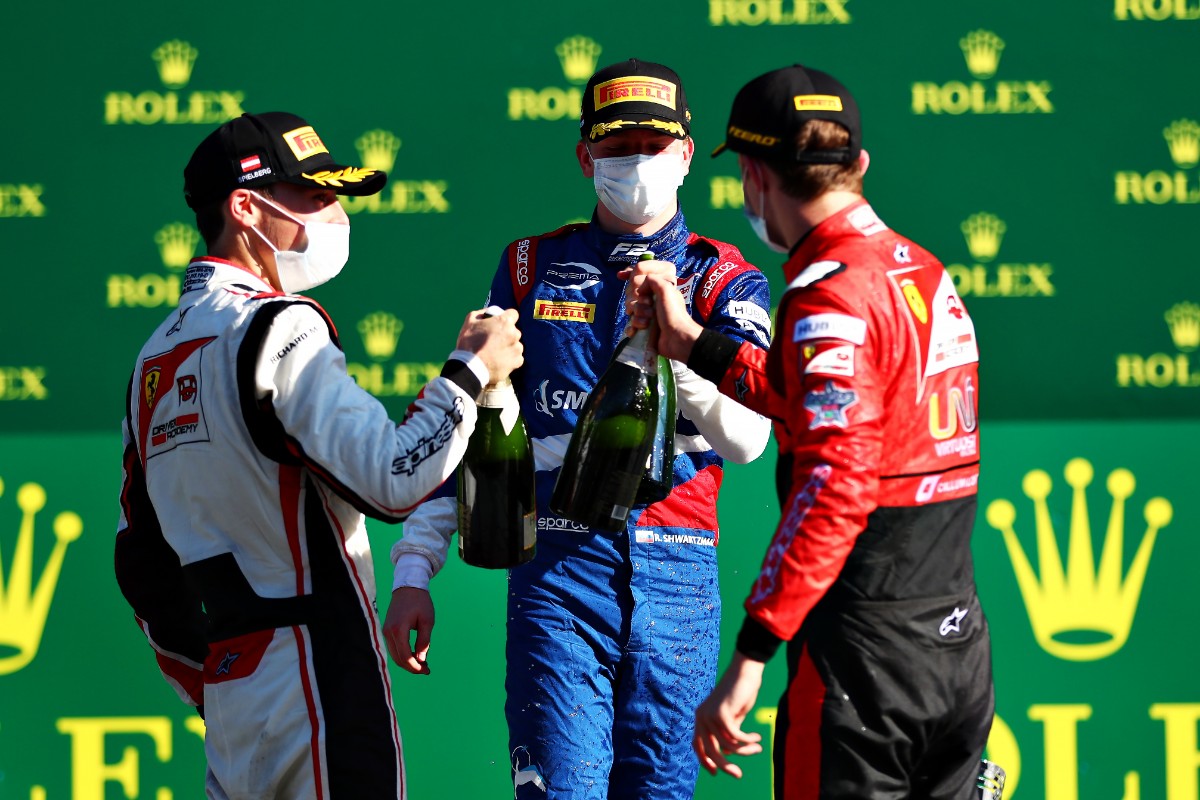 After two years of rookie champions, the momentum in Formula 2 swung back in favour of the experienced drivers during the 2019 season. Just three of the 20 races were won by rookies (Anthoine Hubert and Mick Schumacher).

2020 appears to have re-addressed that balance with a number of the FIA Formula 3 graduates immediately finding their feet in F2. This may partly be down to the introduction of the 18-inch tyres levelling the playing field somewhat, but it’s also a testament to the quality of the rookie drivers in the 2020 F2 field.

In qualifying, MP Motorsport’s Drugovich earned a front-row start on debut and was one of four rookies inside the top 10 on the grid – compare this with the 2019 opener where Schumacher in 10th was the highest-placed rookie on the grid.

While Drugovich faded to eighth place in the feature race, ART Grand Prix’s Marcus Armstrong mastered an aggressive tyre strategy to charge from 13th on the grid to finish in second place, ahead of his 2019 FIA F3 title rival and team-mate Robert Shwartzman – who immediately picked up Prema’s first feature race podium since 2018.

Armstrong’s team-mate Christian Lundgaard and DAMS’ Dan Ticktum followed to ensure that race winner Ilott was the only series returnee to finish inside the top five. Drugovich made amends in the sprint race to win on debut, and would have likely been joined on the podium by his former ADAC F4 title rival Armstrong, had the Kiwi’s car not failed.

Drugovich was superb and earned MP Motorsport’s first F2 race win since 2017 as well as returning to the kind of form that saw him win 14 of the 16 races in the 2018 Euroformula Open season, and battle Juri Vips and Armstrong for the 2017 ADAC F4 crown.

Ticktum took to the podium in only his fourth race in the series and Ferrari junior Shwartzman followed in behind in fourth place closing out a strong weekend for the rookies.

There were also relatively few mistakes from the leading rookie drivers, with second-year driver Schumacher making the biggest error in the feature race when he flew off the road and out of second place, while his less experienced team-mate Shwartzman finished on the podium.

It may only be one race weekend, but all the evidence so far suggests that the leading rookies are more than up to the task of taking the fight to the more experienced drivers in the field.

…but Zhou and Virtuosi will be tough to beat 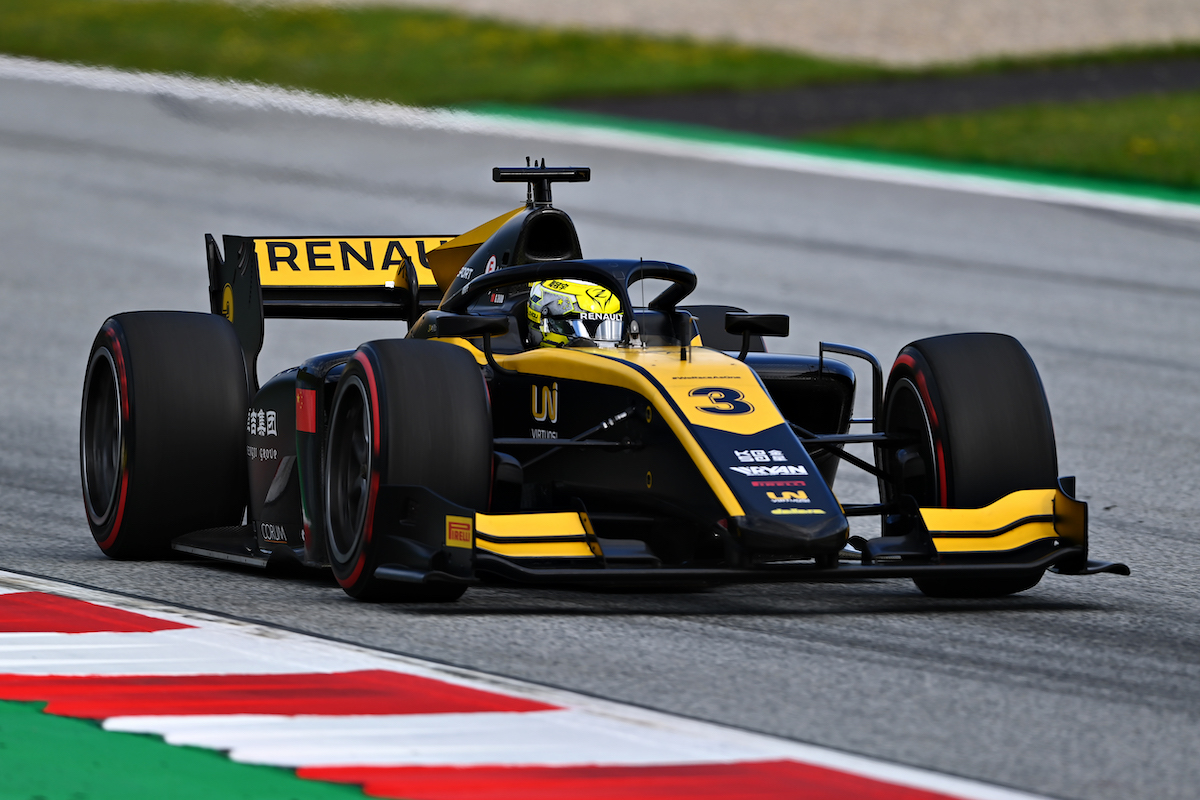 Guanyu Zhou seems to have found the necessary extra gear over the long off-season that he needs to transform from a solid rookie to championship favourite. He took what is only his second-ever F2 pole position by almost half a second (a huge margin around such a short lap) and re-took the lead with relative ease on two separate occasions in the feature race.

He dropped to third place after a poor start but quickly passed Drugovich as well as Virtuosi Racing team-mate Ilott. He re-passed Ilott as well as the fast-charging Schumacher when he was jumped by both of them in the pitstop phase. Zhou demonstrated the one-lap speed needed to win the F2 title as well as the racecraft when he pulled two overtakes on Ilott and wasted little time when doing so.

Zhou would have won the feature race without the technical issue and demonstrated the potential to make more progress in the sprint race than Ilott did – Ilott ended up dropping a position and out of points in ninth place. Zhou’s charge back through the field on Sunday was somewhat blunted by having to avoid Luca Ghiotto’s spun car.

Regardless, the Virtuosi duo will have to make more progress in the reverse-grid races if they’re to be championship protagonists. Prior to the season, Formula Scout predicted that an intra-Virtuosi fight would decide the title, and based on the evidence of the opening round, that may transpire to be the case even though the rookies look capable of putting up a fight.

British ace Ilott may lead the championship, but Zhou looks like the fastest package, perhaps benefitting from sticking with his 2019 team while Ilott is still finding his feet after moving from Charouz. It will be fascinating to see if Zhou can replicate that level of performance this weekend at the same circuit and pick up his richly-deserved maiden win. 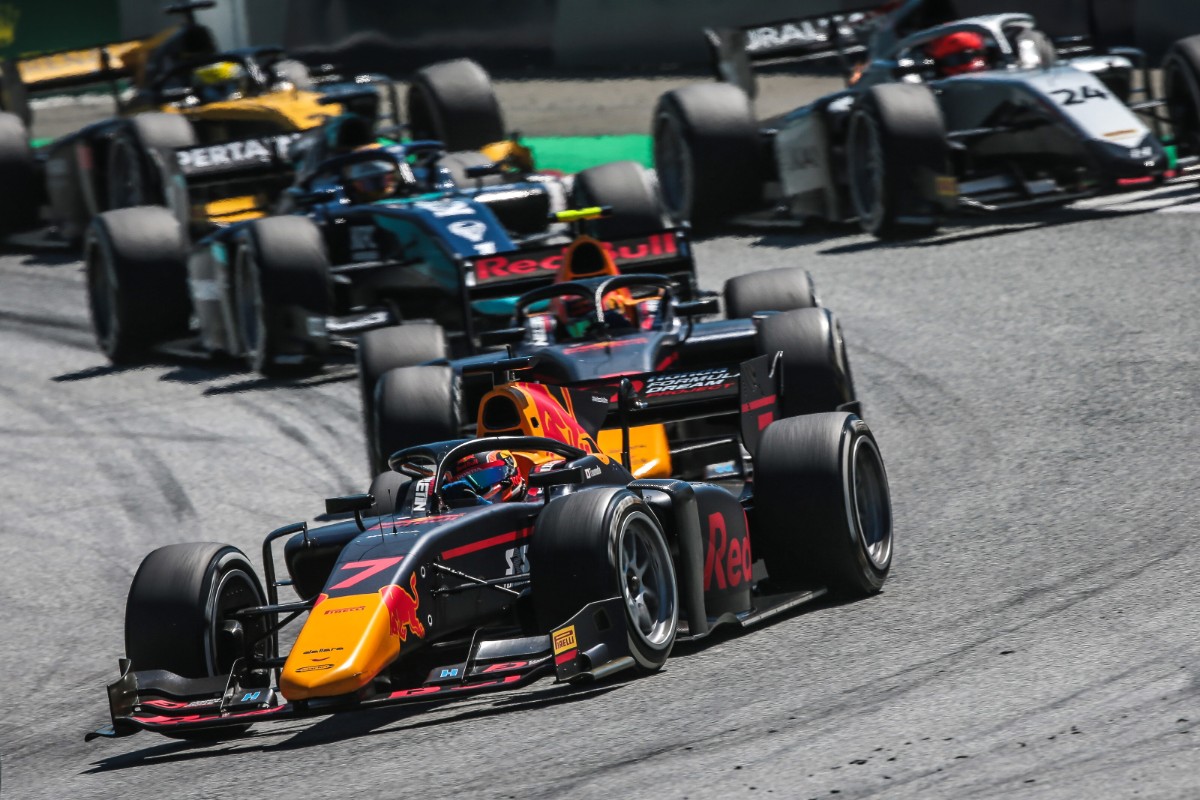 Carlin’s all-rookie driver line-up were the dark horses following the single pre-season test in Bahrain. Friday’s practice session was topped by its Honda protege Yuki Tsunoda, which appeared to back up the British outfit’s lofty ambitions for the year.

Jehan Daruvala and team-mate Tsunoda sat in second and fourth after the first qualifying runs, but were unable to set another lap time following the timing of the late-red flag and their place towards the back of the queue to exit the pitlane in the dying minutes of the session.

This left the duo in an unrepresentative sixth and 12th positions on the grid respectively. Daruvala made a poor start which allowed Tsunoda to catch the Indian driver. Tsunoda then ran into the back of team-mate Daruvala on the run to Turn 3 on the opening lap, effectively ending both their chances of points. Daruvala would later recover to ninth place only to run wide and damage his tyres, leaving him 12th at the chequered flag.

On Sunday, Daruvala turned around Ghiotto and picked up a penalty while Tsunoda was caught up in a battle with Trident’s Roy Nissany and was limited to 11th place. This left Carlin with zero points despite having more than enough one-lap and long-run pace to match the likes of Virtuosi and ART.

Those type of errors are not unexpected for F2 rookies, but the Carlin duo can’t afford to repeat those same misdemeanours this weekend if they’re to stay in the race for a solid F1 superlicence points haul.

Fortunately, the reliability during F2’s 2019 season appeared to be head and shoulders above the 2018 season, which saw the introduction of a car that was so difficult to get off the line that the series even resorted to introducing rolling starts midway through the season.

Unfortunately, the Red Bull Ring proved to be something of a car-breaker for not only F1 but F2 as well in 2020. Zhou lost a likely 25 points for a maiden F2 win, and potentially the additional points that would have come on Sunday with a better grid positioning.

Armstrong would then have probably left the weekend as the championship leader had his ART-run car not ground to a halt on Sunday, as the 19-year-old was running in a strong third place from seventh on the grid after a stunning double overtake on Ticktum and HWA Racelab’s Giuliano Alesi.

The high level of attrition in the F1 race showed that ensuring reliability isn’t easy even with the best engineers and resources on the case – but in a spec series there is extra pressure to make sure any problems don’t unfairly affect certain drivers. Given the unusual circumstances surrounding the start to this season, the issues may prove to be specific to one weekend or one circuit, and not one that defines this year’s championship fight – at least that’s what everyone hopes. 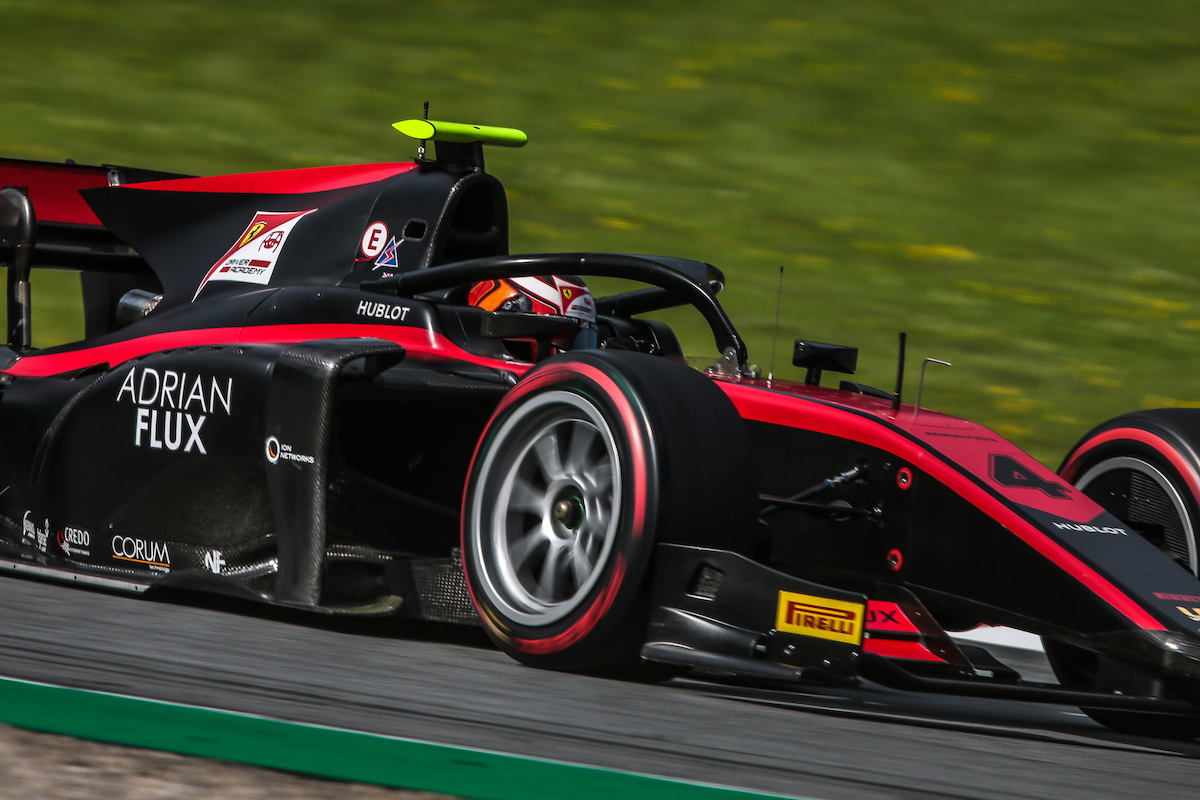 There was lots of trepidation around the introduction of 18-inch wheels and tyres to Formula 2, particularly their weight and the potential effects on handling, but the signs from the first weekend of racing were positive.

In the Bahrain test, drivers had reported having less time to catch a moment of oversteer and prevent a spin. But, considering their rustiness after several months out of the cockpit, there seemed to be very few instances of drivers losing control. That was despite the rather conservative nomination of compounds for the first Red Bull Ring round, with the hard and soft chosen to provide the chance for a different selection – of medium and supersoft – for round two at the same venue.

Pirelli said it was impressed by both the performance and durability of the tyre in both available compounds, and particularly how drivers were able to “attack” continuously throughout a race. Drivers could race hard and in close formation on both compounds during the feature race, and there was also great flexibility in strategies – as demonstrated by Armstrong switching from the softs to the hards after just seven laps (the leaders went more than twice as far before pitting) and having the pace to jump six rivals on his way to second place.

The move to softer compounds for this weekend will give the championship and its tyre supplier a great back-to-back test of the full range – and the chance to confirm whether it gives them more flexibility in their nominations while still ensuring the sort of action F2 is known for.