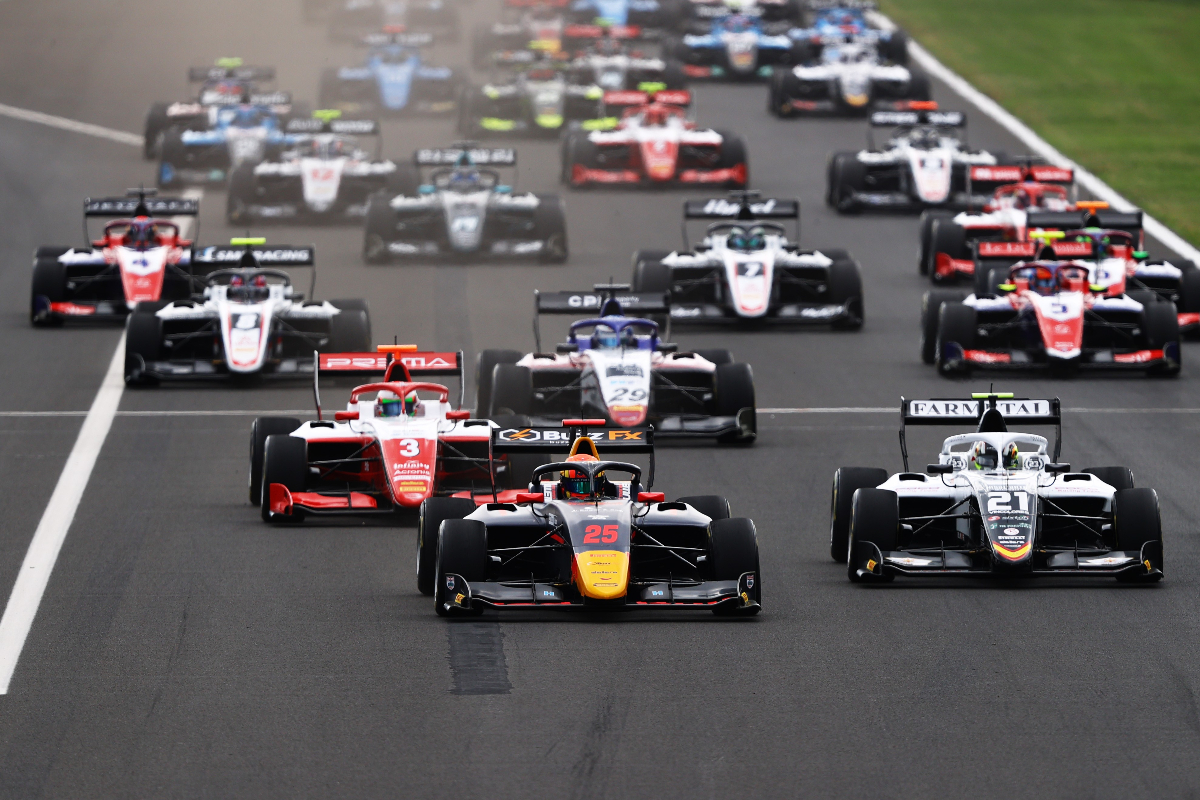 While the title is not a foregone conclusion yet, Dennis Hauger’s clinical execution of the FIA Formula 3 Championship weekend at the Hungaroring puts him in the most comfortable position for the summer break

Victory in mixed conditions and a brace of fifth places for Hauger in Hungary extended his points lead considerably, but there were several storylines at play in addition including the on-track winner of race one losing out on Saturday.

The Hungaroring didn’t necessarily produce the best racing in comparison to the previous rounds at the Red Bull Ring and Paul Ricard, but there was some great action in the wet and some fascinating results up and down the field.

Here are five points to take away from the Hungaroring weekend as FIA F3 hit its halfway point.

While things did not heat up too much between the drivers, the temperature was simply extreme at points through the weekend. On Friday and Saturday, track temperatures went north of 60°C.

“At the end of the lap, especially after turn 11 when you put a lot of load into the rear-left, you feel that the rear-left is starting to give up. It’s not easy. In F3 you have not a lot of push [laps] in the weekend, and you have to adapt to every little situation. So when the track temp is that high, you just have to fix a little [the] limit in sector three to not go over it and put the lap in the bin. It’s not easy, it’s quite a challenge.”

After race one, Prema team-mate Olli Caldwell told Formula Scout: “It was a lot cooler this morning, both air and track. Yesterday I think the team said track temperature was about 67°C for qualifying, which I’ve never seen before and neither have they. That’s an insane temperature. 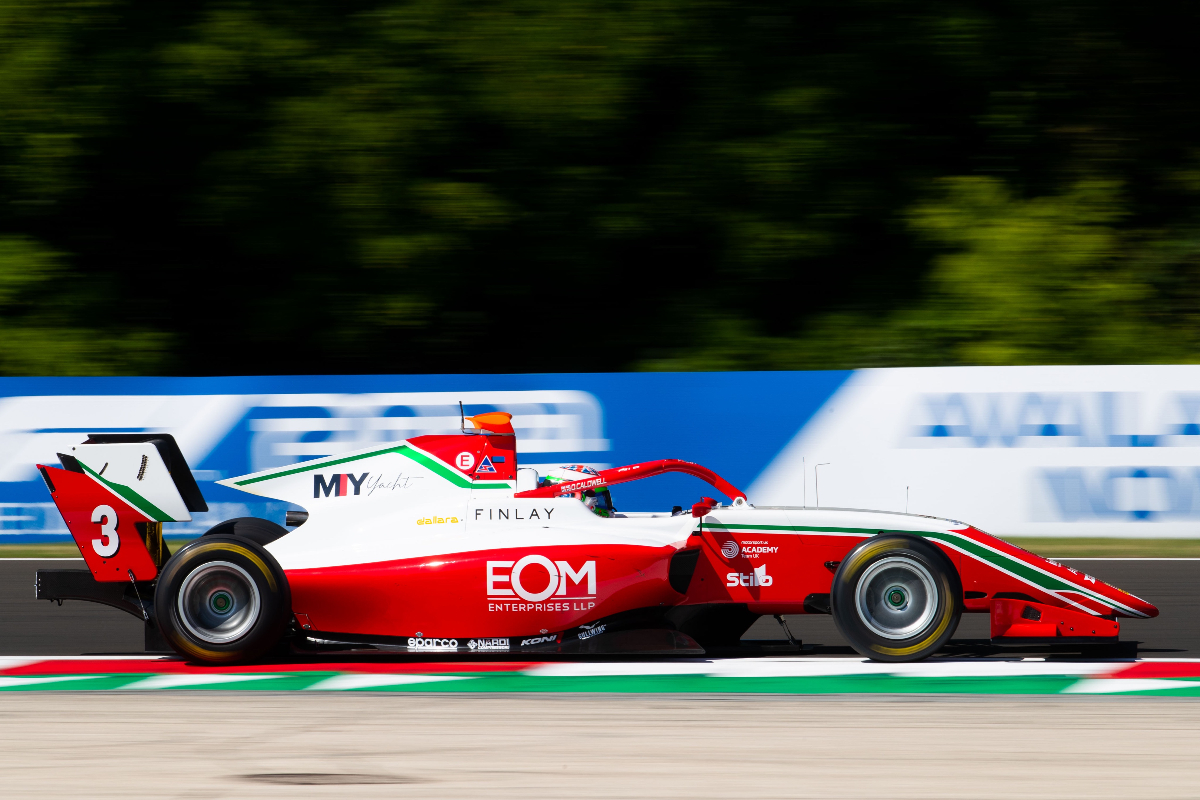 “On qualifying my rear tyre temperature was already overheated by basically the end of sector one. I was getting big oversteer in sectors two and three, whereas this morning even during the race, okay they changed the car a bit, but it lasted three, four, five laps before I started to feel that.”

HWA Racelab’s race two winner Matteo Nannini said: “Hungaroring is like Barcelona, so one of the worst tracks for the degradation. It’s more thermal degradation, because the tyres are just overheating. For me it was not a really big issue, through the end of the race just I tried not to take too many risks, also because I got twice track limits warnings as I was trying to push to pull a bigger gap to Enzo [Fittipaldi]. But obviously I couldn’t push at 100% every lap otherwise I would have not finished the race. But I think it was okay.”

Fittipaldi himself expected worse tyre wear in the warmer conditions of the afternoon race, as it wasn’t “that big of an issue”.

Iwasa feels the need to do better

He may have claimed his first F3 win following Lorenzo Colombo’s race one penalty, but Red Bull junior Ayumu Iwasa felt lacking with his weekend. The Honda protege currently sits 11th in the series points in his first year out of Formula 4.

“This is a good [time] for the first podium,” the Hitech GP driver said after finishing second on-the-road to Colombo.

“I wanted to catch the leader, but I didn’t have any good speed all the race until the end, so I have to improve my driving in the car, everything. During the race I had some mistakes and I was struggling a bit with the car, especially with oversteer, so we have to improve it for the next race.”

When asked by Formula Scout for his reflections on his season so far, the reigning French F4 champion said: “I was struggling to adapt my driving to the car from the beginning, but at the moment I could get the good feeling from the car. 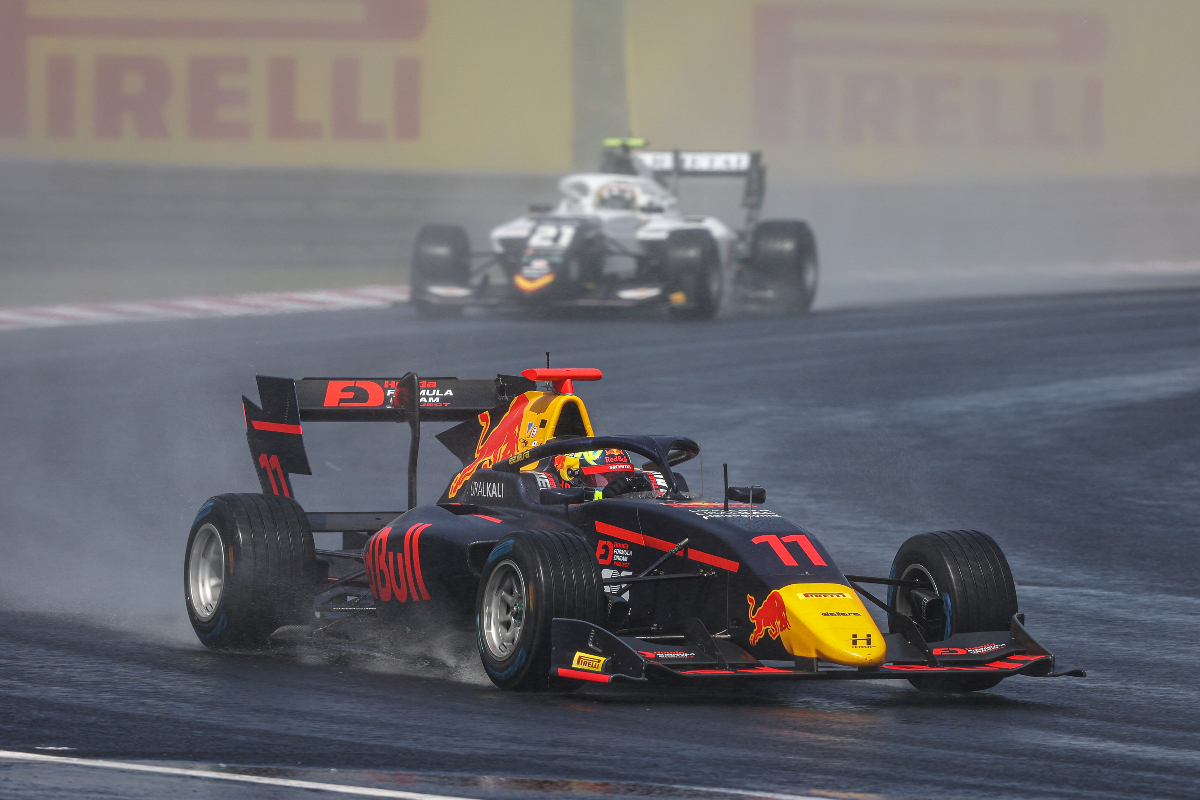 “I think until the previous event [in Austria], I couldn’t get the good feeling from the free practice, so the beginning of the race weekend, but at the moment I could find a good solution for that so from now it will be much better, more than before.”

After the weekend, he expanded on why he “was not so happy” with his pace despite it being “a very good weekend”.

“In free practice and qualifying I suffered quite a lot with understeer,” said Iwasa. “So I think we can do better. In races one and two, that was better but I couldn’t get traction out of the slow-speed corners so I was finding that quite difficult.

“Race three was fun in the wet. I had a good pace early on and I was enjoying it. The conditions were very similar to Paul Ricard and there I used the tyres too much and had nothing left at the end. So I took care of my tyres this time. At the end of the race I looked at the other cars and my tyres had much more left, I should have pushed harder.”

Saturday briefly marked Campos Racing’s first win on the Formula 1 support bill since the loss of its eponymous team founder Adrian Campos last winter as Colombo took the chequered flag in first place. But dropping more than 10 car lengths behind the safety car earned the team’s lead driver a penalty, and instead handed a maiden success to Iwasa.

The team shared its view of the five-second penalty on social media, saying that “despite the penalty, which from our point of view is hugely disproportionate, we won on the track, this race is for Adrian, and no one will take this away from us, we showed our potential and we want to congratulate Lorenzo for the drive”.

Colombo himself said before his penalty that the team needed the result.

“At least a podium was already a good motivation, but doing it with a win, that means we have a strong car in Hungary,” he said. 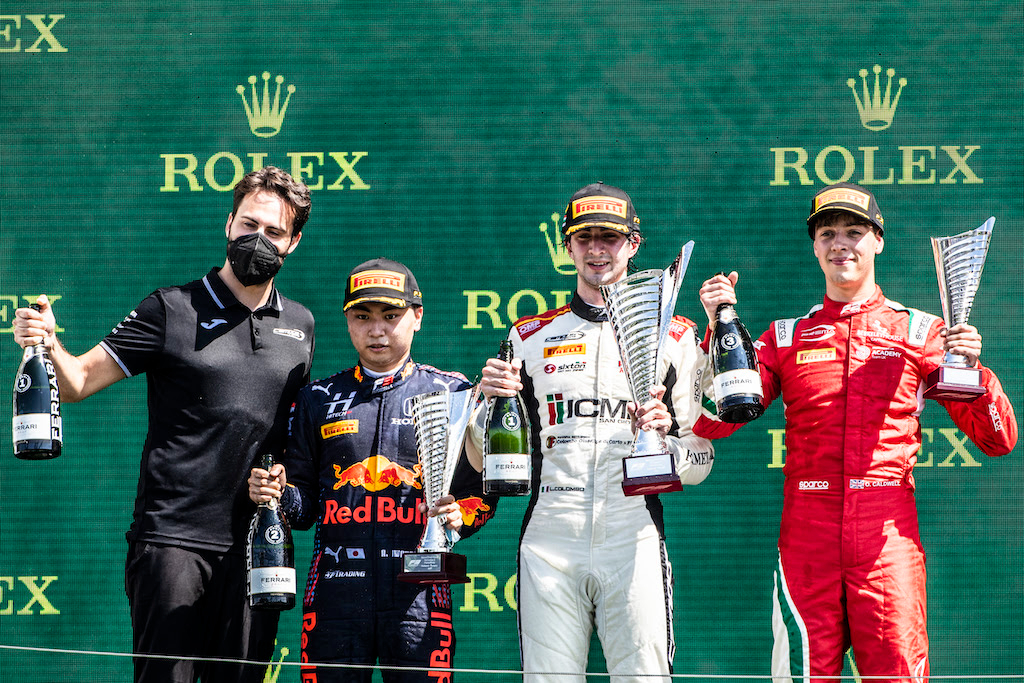 Colombo was also asked about what the victory was meaning for a team still mourning its founder,

“I think the human side was the most critical one. Fortunately in my life I haven’t lost any close person to me, so I still didn’t get this feeling. I hope I get this as late as possible, of course. But of course I think for the team manager now, the son of Adrian, I think he struggled a lot with keeping this human side likely completely clean because it happened I would say one month before the season started with testing. You have to plan a lot of things as a team manager, so you need to be really focused on what you’re doing, and if you have something around that is causing you a major problem then you’re going to suffer it.

“But at least with this win we have found this motivation that we really needed, and everybody in the team now is more motivated to do what we can do, what we have shown today, and I think this is the most important thing, to basically come back alive and that’s what we really needed.”

Nannini not 100% satisfied with season

In race two, Nannini joined the FIA F3 winners list after coming out on top of a battle with Charouz Racing System’s Enzo Fittipaldi. He’s currently ninth in the standings, but with only five points finishes is losing satisfaction with his campaign.

“F3, I’m not satisfied at 100% yet because I could have already scored many more points and I had some issues in many cases,” he said. 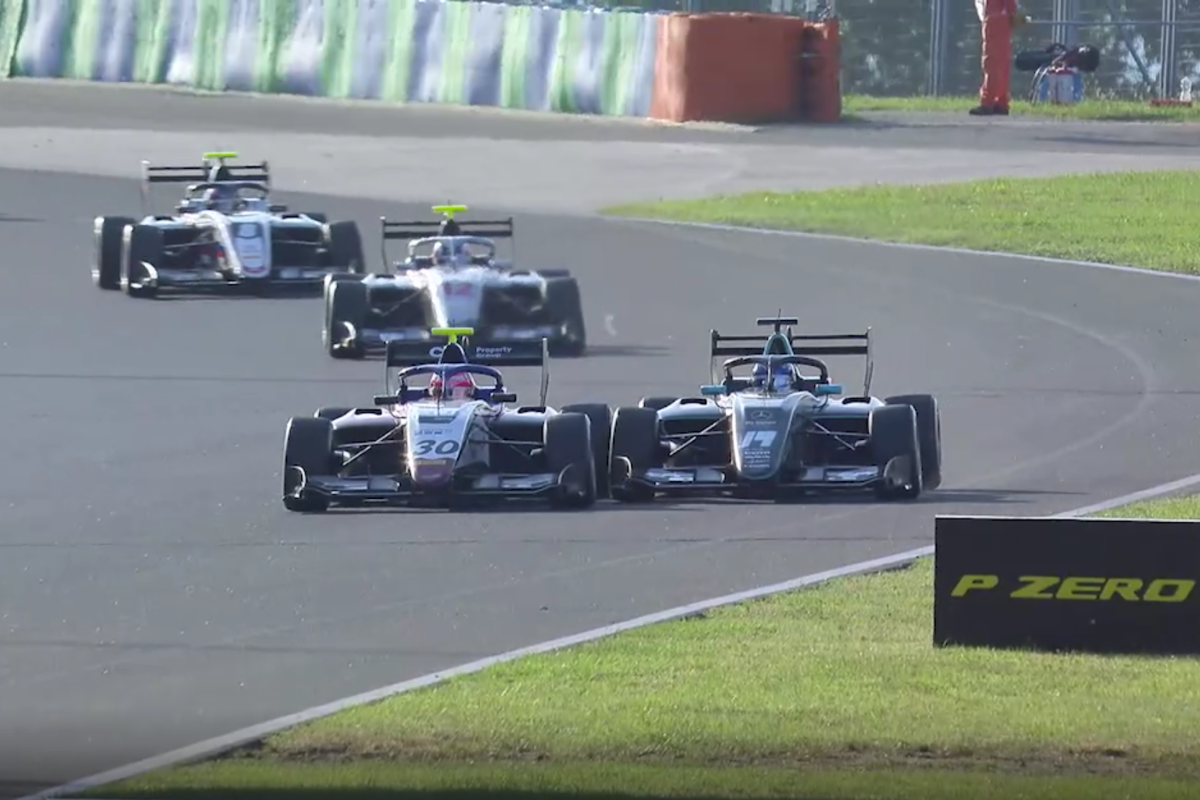 “In this category one-tenth can really make the difference. It can be like five places. So happy but not at 100%. I would have liked to have been much more in the front in the championship.”

He also accepted that being able to race in Formula 2 alongside his second FIA F3 season “is a privilege” to be used.

“I’m really happy to do that because I’m the only one that is able to do that. In F3, here I wanted to score as many points as possible and I was thinking for the championship,” Nannini said.

“In F2 instead it is just about learning for the years ahead, because they are not the same tracks. So with F2, I have to [get] as much experience as possible with the new tracks, like I have already.

“Obviously, I know that it is a privilege to do that, and I will use that as much as possible.”

Speaking of his race win, he said: “I’m really happy, because I’ve been really close to the victory already twice this year, and I lost it just a couple of laps to the end of the races.

“I really wanted this victory, and I think if people on the outside could see, because at the beginning I tried to be as aggressive as possible, obviously staying in the limit.

“Once I got the move done my pace was better, so I was able to create a gap and to manage it through the end of the race.

He added: “I know just for the championship I lost a lot of points, but racing is racing, and incidents can always happen. I’m really happy and also for the team because this is a result that we deserve.” 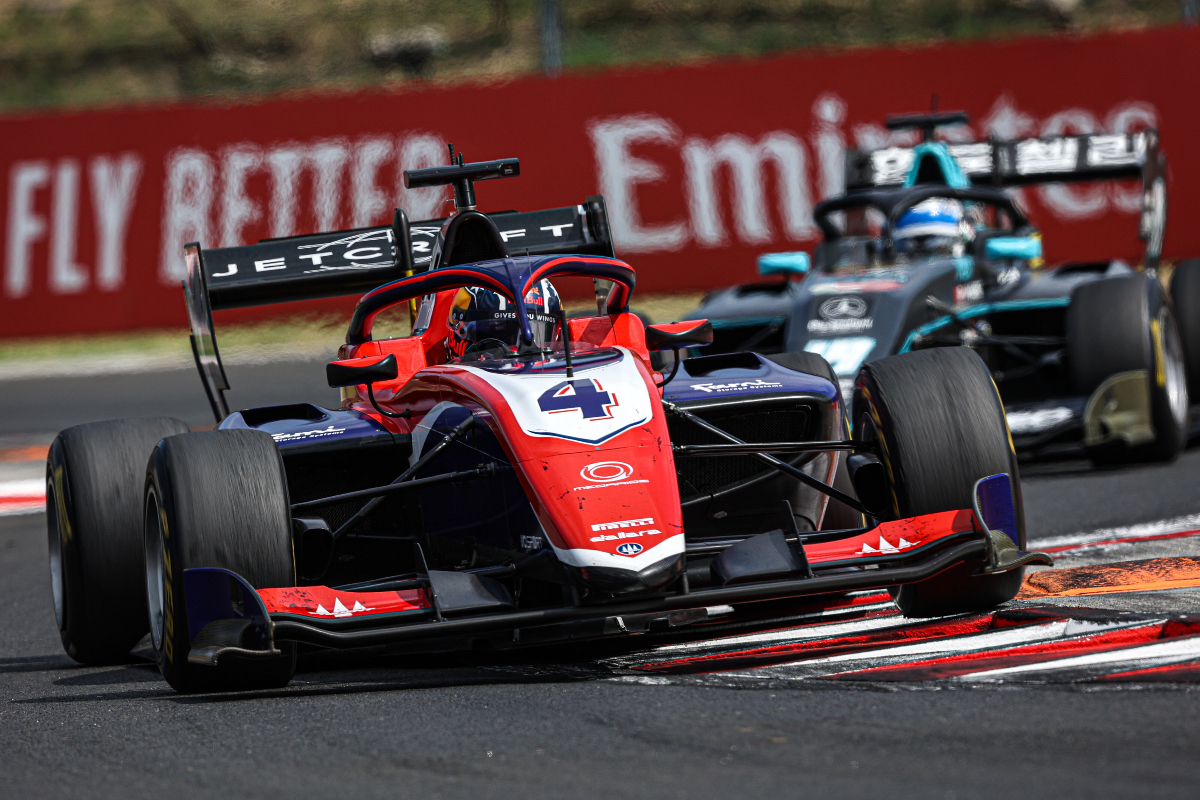 Trident could have performed in the dry too

Hitech GP and HWA made the top step of the podium for the first time in 2021, but Prema’s usual main rival Trident couldn’t get near it and took a best finish of third from the weekend with Jack Doohan.

The Australian had an up-and-down weekend, strugglinh in race two’s heat and falling out of the points positions, but then finding something on the car that got him pumped up for Sunday’s race in which he finished third.

“Race one wasn’t amazing, again we were struggling with the rear, never really felt comfortable, never felt I was in a position to move forward,” Doohan said.

“Luckily, we scraped ninth, then for race two it was the same. I couldn’t brake because of rear locking, and I ended up having a 68(%) brake bias. To give you a reference I am normally 59 to 60 on a push lap but by the second lap I was already at 64, 66 and couldn’t stop the rear from locking.

“As soon as I wanted to turn in it just wanted to snap so there was a clear issue. Honestly, if I didn’t back off the pace, I would have fenced it. It was very disappointing.

“On the managing side, I think it was the best race I have ever done. This time last year or even at the beginning of this year I would have lost it.

“We found a huge thing last night, it kind of justified what has been going on at the last two rounds and I was really looking forward to today. Then it started raining but I wasn’t upset by that. It was a good race in the wet, happy to get P3, but I think we deserved more, just unfortunate that we don’t have the pace of those red cars.”