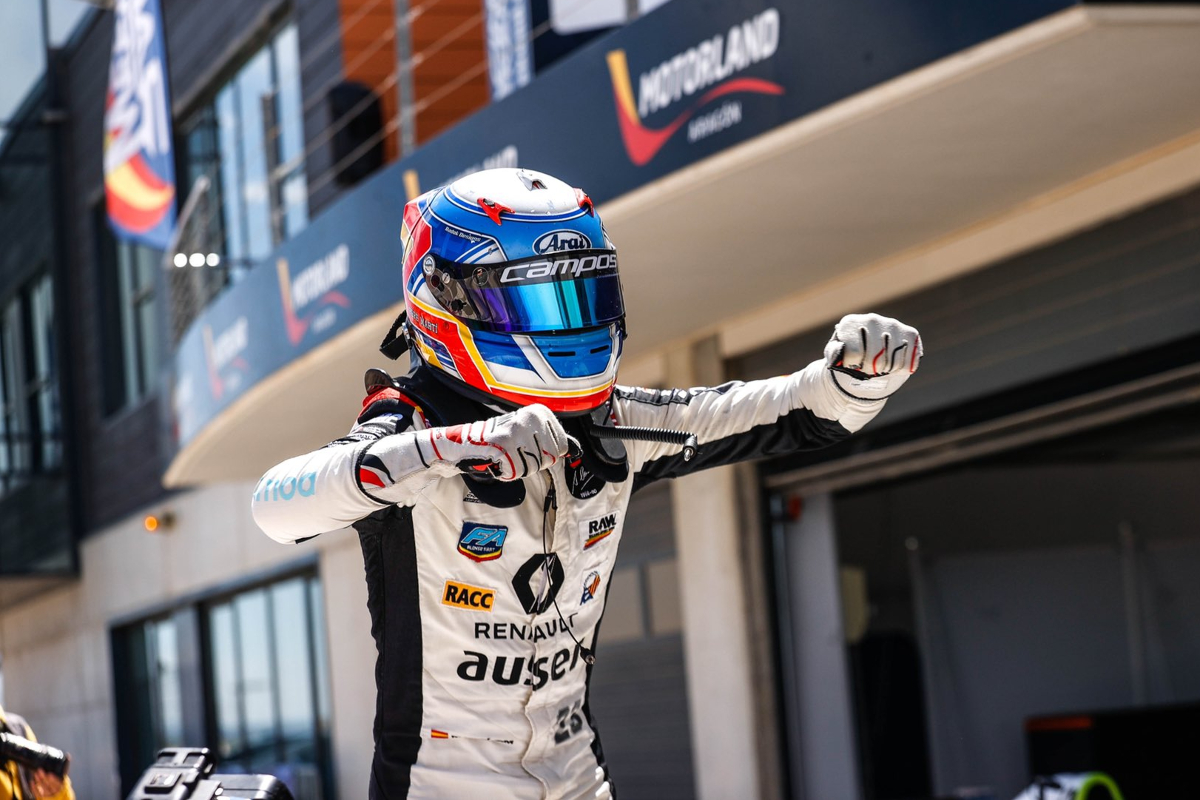 Campos Racing’s Pepe Marti cruised to a second Spanish Formula 4 win at Motorland Aragon as Daniel Macia put in a defensive masterclass to finish in second behind him.

Marti started from pole for race three of the weekend as a result of taking fastest lap in race two, and made a great start to escape the attacks of Formula de Campeones’ Macia on the opening lap.

However the top two were brought back together by a safety car period caused by Teo Martin Motorsport’s Filip Jenic spinning and stalling, after he was tapped by MP Motorsport’s Georg Kelstrup.

On the restart it was a repeat at the front, while Rik Koen attacked MP team-mate Dilano van’t Hoff for third place. He made it through, and was swiftly followed by Sebastian Ogaard and Guilherme Oliveira.

At turn 15 of the restart lap Oliveira then cleared Campos’s Ogaard for third, and set about chasing Macia. Through the second half of the race he tried almost every lap to pass Macia at the first corner but couldn’t do it, and his effort on the final lap sent him through the grass run-off and into the clutches of the drivers behind.

Van’t Hoff initially fell back, coming under pressure from more of his MP team-mates as well as Drivex School’s Max Arkhangelskiy, but Koen then slid down the order in the race’s second half while van’t Hoff upped his pace.

He closed in on the train of cars fronted by Macia, and passed Ogaard on the final lap to take fourth place behind Oliveira while Macia held on to his second place almost five seconds behind winner Marti.

Ogaard was fifth, with Koen and Kelstrup coming sixth and seventh. Degnbol lost spots, while Arkhangelskiy had a spin and stall that sent him to the back and it meant Global Racing Service’s Vladislav Ryabov came through for eighth

Arkhangelskiy still finished ahead of Teo Martin’s Oliver Michl, who took an early drive-through penalty, while MP’s Gil Molina and Manuel Esperito Santo weren’t classified after trips to the pits.