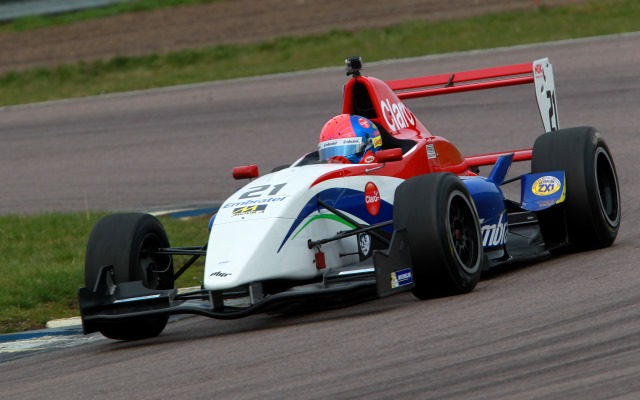 The Brazilian MGR Motorsport driver set the pace in the third and final session of the day.

?It was tough in the beginning, we have a new tyre this year so we?re still working on getting the car right,? said second-year driver Fittipaldi.

?We made a couple of changes throughout the day, some improved things, some didn?t work, but in the last session we put it all together. Quickest is good but we have to continue to work on it ? there?s still a lot to come with these tyres.

?It?s always going to be competitive in a championship like this, you can never underestimate your opponents. You have to do your best, work the best you can with your team, and then you can be right there challenging. Today has been a good start.”

Fittipaldi was just 0.03 seconds quicker than second-placed Piers Hickin. The Scorpio Motorsport driver had earlier topped the opening session of the day.

Matteo Ferrer was third, only 0.087s slower than team-mate Fittipaldi. Fourth was Alex Gill, who topped the times in the second of the three sessions.

Gill is the only confirmed driver at present at Fortec for the 2014 season, but he was joined in the team at the test by Belgian Wolfgang Reip. The 26-year-old won the 2012 edition of Nissan’s GT Academy, and improved during the day to finish up fifth quickest, 1.6 seconds off Fittipaldi.

Close behind was Colin Noble, who also carries Nissan backing on his MGR entry. Greek racer Dimitris Papanastasiou was seventh in the sole Hillspeed entry, ahead of the North American Cliff Dempsey Racing pairing of Travis Fischer and Patrick Dussault. Jack Butel rounded out the ten runners at the test.

The 2014 Protyre Formula Renault season begins at Rockingham on 5-6 April.