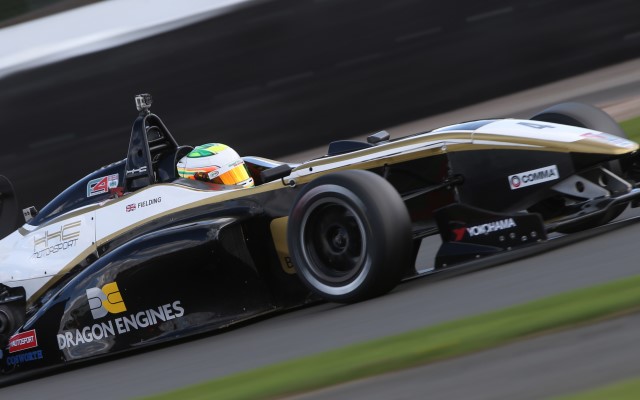 Sennan Fielding claimed his first win in the BRDC F4 Championship by just 0.191 seconds as he held off a late attack from Struan Moore in race one of round five at Silverstone.

Fielding led from pole position under early pressure from Moore and from series debutant Alex Palou, with the top three covered by only half a second at the end of lap two.

Fielding was then able to build up a one-second lead as Moore and Palou scrapped, but after shaking off the Spaniard, Moore cut the gap inside three laps to 0.289s, going onto the final tour. Fielding was able to hold on, however.

After his rapid start, Palou lost pace compared to the front two and succumbed to pressure from behind from Arjun Maini, who got through on lap eight of 10 to complete the podium.

Palou finished a close fourth, clear of battling title rivals George Russell and Raoul Hyman. Hyman started back in 15th as a result of a ten-place grid penalty for colliding with Russell, but got up to sixth by the end of lap four. Russell was struggling with damage to his nose cone, and Hyman was briefly able to get ahead, but Russell re-took the position and held onto fifth to slightly extend his championship lead.

Diego Menchaca was seventh ahead of Rahul Mayer, who will start race two from reverse grid pole. His Hillspeed team-mate Gustavo Lima took the chequered flag in ninth but a five-second penalty for exceeding track limits relegated him to 13th, with the team’s third driver Alfredo Zabalza and MGR’s Chris Middlehurst completing the top ten.

Will Palmer started second on the grid, but was forced to stop on the first lap with an issue.